In 1950 the institutional consolidation of the division of the world into two camps continues, the Cold War intensifies. The two camps face each other militarily for the first time in the Korean War . The domestic politics of the USA is also determined by it, in the so-called McCarthy era .

The division of the world into two camps also applies to the two young German states that were founded the previous year. In the Federal Republic the use of food stamps is running out; the CDU is a nationwide organization under the leadership of Konrad Adenauer ; the Federal Court of Justice begins its work in Karlsruhe; the first diplomatic representatives of the Federal Republic abroad are accredited. In the meantime, Walter Ulbricht is appointed General Secretary of the SED and the National Front is confirmed with 98.5% in the election to the People's Chamber of the GDR; In the Görlitz Agreement with Poland , the Oder-Neisse border is recognized as the final "peace border ", a step that is sharply criticized in the West.

The French Foreign Minister's Schuman Plan , which provides for a joint Franco-German administration of the coal and steel industry and which Adenauer welcomes immediately, represents a first step towards equal rights for the Federal Republic . However, differences remain between France and Germany on the Saar question: The inclusion of the Saarland in the French economic area is rejected in all political camps in the Federal Republic, especially since the Saarland and the Federal Republic of Germany have received separate invitations to the Council of Europe.

While in France the bourgeois parties determine politics - the government of Georges Bidault is followed in July by the short-lived cabinet of Henri Queuille , followed by René Pleven - in Great Britain the Labor government of Clement Attlee is confirmed in office , albeit narrowly , against which Winston Churchill had run. In the meantime, there are demonstrations and riots in Belgium on the occasion of the return of King Leopold III. from exile; Although a referendum had brought a narrow majority for his return, the pressure on him, accused of a lack of will to resist the German occupiers in World War II , finally gave in by resigning and leaving the throne to his son Baudouin I. Sweden also gets a new monarch , where Gustav VI. Adolf the late father Gustav V follows.

The second half of the year is completely overshadowed by the Korean War . North Korean troops cross the 38th parallel and push South Korean troops back to a small bridgehead around Pusan within a few weeks . It is true that the UN Security Council (which was boycotted by the Soviet representative Malik at the time ) strongly condemned the attack and quickly decided on an intervention force . However, the USA, as a regulatory power in the Far East , had already started to drastically reduce its military presence in South Korea and Japan and is now forced to provide considerable funds for the provision of new troops and modern war material. The US jet fighters are mostly inferior to the Soviet - made MiG-15s and North Korea is also sure of the support of the People's Republic of China , which is annexing Tibet at the same time .

The American commander in chief of the UN troops, Douglas MacArthur, manages a surprise success with the daring landing at Incheon in the rear of the advancing North Korean army, which forces the communist troops to retreat. When some UN units already reached the Korean northern border on Yalu in October , China intervened and pushed the intervention army back south. At the end of the year, the front for the positional battle stabilized not far from the starting positions at the 38th parallel.

The Korean War stirs up fear of an attack by the Eastern bloc in America and Western Europe and raises the question of a West German defense contribution. In the USA domestic politics is determined by the concern of infiltration by communists and their sympathizers, which it is hoped to counter by questioning suspects before the committee for un-American activities , which in some cases appears to be inquisitorial ; especially Senator Joseph McCarthy , who gives his name to the entire era, stands out. Espionage trials such as those against Klaus Fuchs and Alger Hiss also contribute to the anti-communist atmosphere .

The so-called Hollywood Ten , 10 directors and screenwriters from a "black list" of around 100 Hollywood personalities, have to serve 6 to 12 months' imprisonment in 1950 after they cited the first amendment of the US Constitution ( freedom of expression ) before the Un-American Activities Committee refused to testify and were convicted of disregard for Congress. 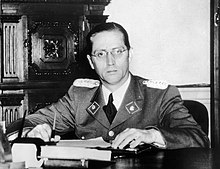 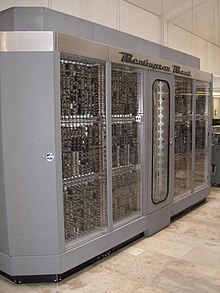 Univac I Factronic in the Deutsches Museum in Munich 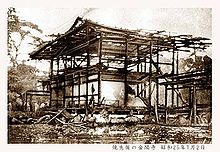 Kinkaku-ji Pavilion after the fire

Reinhard Mirmseker at the German Figure Skating Championships 2006 in Berlin 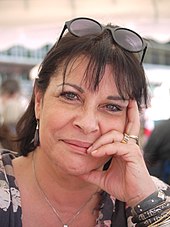 Leopold Ziegenbein, captain of the Bremen , 1931