The term junta comes from Spanish and means "government", "administration". Here it means in the narrower sense a form of oligarchy , that is, a few (the military) dominate the state apparatus. A military dictatorship is usually the result of a coup that is directed against the existing order and the associated government. Often, military dictatorships are characterized by the suppression (repression) of the political opposition from. This is regularly accompanied by violent measures such as torture , political murders and the secret " disappearance " of politically unpopular people.

Military dictatorships have occurred mainly in developing countries in recent decades . They are particularly characteristic and important for the political development of Latin America in the 20th century, when most of the states of Latin America were ruled by a military dictatorship for a longer or shorter period. As part of comparative government theory , the political scientist Gabriel Almond calculated in 1993 that at the end of the 1980s over a third and at the beginning of the 1990s over a quarter of the states were ruled by military regimes. Within this political science department, one differentiates between such forms of rule according to the intensity of the prevailing authoritarianism and their government goals. There are politically right-wing and, more rarely, left - wing ones. In Latin America in the 1970s and 1980s in particular, the military rulers were almost always strongly right-wing, which also brought them allegations of fascism because of the illegal use of violence against opposition members in the context of so-called dirty wars .

There are also cases in which military dictatorships have had a positive effect. In the Carnation Revolution in 1974, politically left-wing officers overthrew the Portuguese dictatorship of the right-wing Estado Novo, which had previously ruled for decades . The officers granted independence to the Portuguese colonies, held democratic elections on an announced schedule, and then handed power to the newly elected government.

Military dictatorships of a new type

Historically, military regimes are not a new phenomenon in post-war history , but from the 1960s onwards, a new type of military dictatorship emerged , especially in Latin America . They differed from the traditional military dictatorships in their objectives of rule, which now mainly derived the legitimation of their power from an alleged or actual threat to the state and society from so-called anti-system, " subversive " groups, which as a rule - but not only - in the political Spectrum on the left . The military dictatorships often appeared as alleged saviors of the state, economy and culture and mostly campaigned for political structural reforms. The Argentine military, for example, described the development they initiated as a process of national reorganization , in which the nation was to be forcibly "reorganized" according to ultra-conservative Christian ideals and then "released" back into democracy. As was particularly evident in the Argentina and Chile cases, the military's seizure and exercise of power was usually associated with excessive violence and extra-legal measures (see Dirty War and Desaparecidos ). In connection with the excessive use of state violence, the two American political scientists R. D. Duvall and Michael Stohl developed the term state terrorism in 1983 , which of course does not only refer to military dictatorships.

In a text by the Heinrich Böll Foundation , this phase in South American history was described as follows:

“Ideologically armed with the doctrine of national security , which was also inspired by the USA , the Latin American military justified their claim to a central role in the state and society since the 1960s. They saw themselves as the only force capable of leading the nation state. The military dictatorships took control of national development and internal security . This was legitimized with the construct of an "internal enemy" who was physically destroyed to defend the "national interests" and large parts of the population had to be controlled to combat it. "

The events during the military dictatorships in Chile under General Augusto Pinochet (1973–1989) and Argentina from 1976 to 1983 , when tens of thousands of people disappeared without a trace , the so-called Desaparecidos , are particularly well known . During the civil war in El Salvador from 1980 the Murdered death squads of the US-backed military government systematically about four thousand opposition activists to prevent (about 0.8% of the population) to a takeover leftist groups. The civil war in Guatemala had similar dimensions, but with even higher casualties .

Human rights organizations estimate the overall balance of the Latin American repressive policy of the military dictatorships of the 1970s and 1980s as follows: Around 50,000 people were directly murdered, around 350,000 are considered to have disappeared forcibly and permanently (Desaparecidos), and 400,000 were temporarily held prisoner for political reasons.

See also : “The 1970s: The Juntas Era” in the article on Relations between Latin America and the United States

The emergence of the new military dictatorships, in addition to social and domestic political factors, must be seen against the backdrop of the Cold War . The case had come to power military governments but not reduced to an anti-Communist defensive movement, but were based in addition to its own ideology , whose main ideologeme was the "doctrine of national security." This ideologue, which is shaped by geopolitical thinking , is associated in the majority of military dictatorships with a worldview that is typical for them. Only with this ideological basis were the military regimes able to justify and legitimize their extra-legal action.

The essential elements of this worldview are in Latin America : 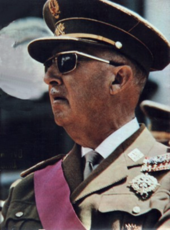 The following overview shows the governments in South America since the 1950s . The dictatorships or military regimes on the continent at that time are highlighted in dark (including the Argentine military dictatorship from 1976 to 1983 ):

The rise of military regimes has been explained by various theories in the past. Different approaches emerge, depending on whether one emphasizes the internal processes of a country or the external influences. In the first case one can argue with the help of modernization theory , which focuses primarily on economic factors. If one emphasizes the external influences, the rise of the military dictatorships can also be justified in terms of dependency theory by emphasizing interventions from abroad, imperialism or the putschist behavior of the political middle class.

Many developing countries are prone to coups and thus also to military dictatorships. In Latin America, too, numerous military dictatorships were established in the 1960s, 1970s and 1980s, most of which, however , were eliminated by the democratic transition in the early 1990s. The reasons for this are mostly social and economic grievances, political crises, the population's loss of confidence in political institutions and the military's historical self-image.

The number of military dictatorships has decreased since the 1990s, which is related to the "waves of democratization" described by Samuel P. Huntington in the 90s. In addition, the end of the Cold War with the collapse of the Soviet Union caused the loss of importance of one of its most important ideological elements, anti-communism .