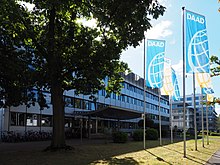 The German Academic Exchange Service e. V. ( DAAD ) is a joint institution of German universities and student bodies to maintain their international relations, which was founded in 1925. The president has been Joybrato Mukherjee since February 12, 2020 .

According to its own information, the DAAD is the world's largest funding organization for the international exchange of students and scientists. Since it was founded in 1925, the DAAD has supported more than 2.3 million academics in Germany and abroad (as of 2017).

However, its activities go far beyond the awarding of scholarships : the DAAD promotes the internationality of German universities, strengthens the German language and German studies abroad, supports developing countries in setting up high-performance universities and advises decision-makers in cultural policy , educational policy and development policy .

With more than 250 programs, the DAAD sponsored around 140,000 Germans and foreigners around the world in 2017. The offer ranges from semesters abroad for young students to doctoral studies , from internships to visiting lectureships , from information visits to setting up universities abroad. The DAAD supports the international activities of German universities with marketing services, publications, events and training.

Scholarships for foreigners are usually advertised through the German embassies , the DAAD branch offices, the information centers (IC), DAAD lecturers and partner universities abroad. Contact the DAAD for German students usually conveys the International Office ( International Office ) a university. The DAAD's Berlin artist program , which is aimed at visual artists, writers and musicians, is an exception .

The DAAD is also the national agency for the coordination and implementation of the European Union's Erasmus program .

Flags of the DAAD on Kennedyallee , Bonn

The statutory form of the name is “German Academic Exchange Service ”, in legally binding letters with the addition e. V. In its publications up until the beginning of 2015, the association also used the variants “exchange service” (see photo opposite) and “exchange service” to clarify the acronym DAAD .

It was founded on January 1, 1925 on the basis of a private student initiative under the name “Akademischer Austauschdienst” e. V. (AAD) in Heidelberg . The headquarters were relocated to Berlin in the year of foundation . In 1933, the AAD has been brought into line , 1943 bombing of the seat in the Berlin City Palace destroyed and disbanded 1945th On August 5, 1950, it was re-established as DAAD in Bonn .

The DAAD's budget comes mainly from public funds, but also from private donors and organizations (as of 2017):

The DAAD offers scholarship holders who come to Germany from abroad or who go abroad from Germany cheap health, long-term care, accident and liability insurance.

The President (see table opposite) represents the DAAD externally.

The general assembly meets once a year.

The office of the DAAD is led by General Secretary Dorothea Rüland . In 2013 the budget volume was 450 million euros, the number of permanent positions as well as project and third-party funded positions 929. In 2013, the DAAD funded a total of 119,906 students, graduates, scientists, artists and administrators: 50,093 came to Germany from abroad, 69,813 Germans gained experience in all over the world. A total of 69,813 people were funded under the EU mobility programs in the 2012/13 university year. In the DAAD, the “National Agency for EU University Cooperation” is responsible for the “ Erasmus + ” program. In addition to studying abroad, it also coordinates internships and the exchange of lecturers and other staff from the university administration.

In addition to its headquarters in Bonn ( Kennedyallee 50), the DAAD has an office in the capital in Berlin, which is located in the WissenschaftsForum Berlin . The renowned Berlin artist program is also affiliated with the capital city office. 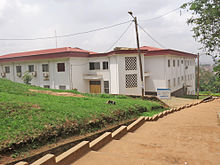 A network of 17 branch offices, 52 information centers (ICs) and 5 German science and innovation houses (DWIH) in 60 countries maintains contact with the partner countries and provides advice on site (as of 2019). The first DAAD branch was founded in London in 1927 , the newest in Bogotá in 2019 .

The branch offices with their founding year:

Foreign students with a DAAD scholarship are looked after in Germany by former German DAAD scholarship holders who are part of the DAAD-Freundeskreis e. V. are grouped together. The Circle of Friends was founded in 1981 and has around 1500 members nationwide. In many university cities there are regional groups that organize the supervision of foreign scholarship holders.

DAAD groups of friends of former foreign scholarship holders exist in many countries.

The participants of the Erasmus program of the DAAD go according to a survey of around 79,000 subscribers about twice as often life relationships with foreign partners one (27%) than students without stays abroad (13%). Furthermore, the unemployment rate among Erasmus students five years after graduation is 23 percent lower than among those who have not been abroad for study or training purposes.

In 2018, the German Academic Exchange Service and the Brandenburg Ministry of Science participated in the Refugee Teachers Program , which helps refugee teachers to integrate.

The DAAD annually awards a Jacob and Wilhelm Grimm Prize to scholars from abroad for “outstanding work in the fields of German literature and linguistics , German as a foreign language and German studies”. The award, in memory of the linguists and founders of German studies Jacob and Wilhelm Grimm , is endowed with 10,000 euros and combined with a four-week research stay at a German university.

The prize for international and intercultural engagement, named after long-time President Theodor Berchem and endowed with € 10,000, was announced for the first time in 2011 and is to be awarded every two years in future. Financed by donations, it is awarded by an international jury. The first award winner was the Aachen rector Burkhard Rauhut .