Wangari Muta Maathai (born April 1, 1940 in Nyeri District , in the Tetu section in the village of Ihithe, † September 25, 2011 in Nairobi ) was a Kenyan professor , scientist , politician and from 2002 deputy minister for environmental protection .

In 2004 the environmental activist , who saw the single-minded promotion of African women's politics as the best way to prevent water and other environmental damage, was the first African woman to receive the Nobel Peace Prize .

Wangari Maathai came from a Kikuyu family south of Nairobi whose father was polygamous. Her father had four wives and ten children. Some of the missionary sisters noticed her talent , and she received a solid education at a well-known monastery school in Kenya. She then received a scholarship to study biology in the USA (Mount St. Scholastica College in Atchinson , Kansas ) and later studied at the universities of Pittsburgh , Giessen and Munich . In 1971 she became the first woman from Kenya to receive a doctorate from the University of Nairobi . In the same year she became the first professor of veterinary anatomy and later dean of her department at the University of Nairobi.

In 1977, she called the reforestation project " Green Belt Movement " (Eng. Green Belt Movement ) to life. Over the years this became a pan-African movement that is now active in 13 countries, founded around 600 tree nurseries and planted 30 million trees by 1993 to protect against erosion . Because of this pioneering role, she was nicknamed Mama Miti ( Kiswahili for 'mother of the trees').

Wangari had three children: Waweru, Wanjira and Muta. In 1979 her husband divorced the scientist on the grounds that she was "too educated, too strong, too successful, too headstrong and too difficult to control".

Wangari became the central figure of identification of the women's movement in Kenya . From 1976 to 1987 she was active in Kenya's National Council of Women in Kenya , which she chaired as president from 1981–87. She was a member of the board to the end.

In the 1990s Maathai, whose commitment to environmental protection and women's rights repeatedly brought her into opposition to the then head of state Daniel arap Moi , was arrested and abused several times. Amnesty International , among others , has repeatedly advocated them. She said:

"I can no longer count the many times that you saved my life and made our work possible."

After Wangari Maathai had run unsuccessfully for parliament and president in 1997, she was elected to the Kenyan parliament in December 2002 for the electoral alliance "National Rainbow Coalition (NARC)" founded by several opposition parties . The NARC replaced Daniel Arap Moi's government, and the newly elected President Mwai Kibaki appointed Maathai as deputy minister for environmental protection . Maathai, who founded the Mazingira Green Party of Kenya , became the first green politician in Africa to make the leap into a government.

In April 2004 she received the international Petra Kelly Prize of the Heinrich Böll Foundation .

Maathai was a member of the Club of Rome .

While Maathai's commitment to environmental protection and rights was widely recognized, she has faced criticism for various statements about AIDS . In August 2004, according to a report in the Kenyan daily Standard, she allegedly claimed that AIDS was a control tool against Africans developed by an evil scientist. In December 2004, however , it made it clear in a statement that can be found on the Green Belt Movement's website :

“It is therefore critical for me to state that I neither say nor believe that the virus was developed by white people or white powers in order to destroy the African people. Such views are wicked and destructive. "

“It is therefore crucial for me to state that I neither say nor believe that the virus was created by white people or by white racists in connection with the destruction of Africans. Such views are malicious and destructive. "

Wangari Maathai was committed to the issue of global warming and climate justice and lectured at various conferences on the subject, among other things, that of Hans Joachim Schellnhuber organized Nobel Laureate Symposium Global Sustainability - A Nobel Cause in Potsdam in 2007, or the UN Climate Change Conference in Copenhagen in 2009.

Wangari Maathai has been an honorary member of the World Future Council since 2009 .

On September 25, 2011, Wangari Muta Maathai died with her family of complications from cancer.

At that time Maathai was working in Nairobi. In 1975 she became a university lecturer, in 1976 chairwoman of the Institute for Veterinary Anatomy and in 1977 associate professor. She was the first woman in Nairobi who was allowed to take up these positions. During this time, she campaigned for the same economic benefits in kind for female as well as male employees at the university. Maathai went so far that she tried to transform the union of employees at the university into a union in order to negotiate these benefits in kind. The court ruled against their union formation proposal, but later many of their demands for equal pay in kind were met.

In addition to her work at the University of Nairobi , Maathai began to get involved in various civil organizations in the early 1970s. She became a member of the Kenyan Society of the Red Cross, of which she became director in 1973. She also worked in the Kenyan society for academics. After the Environment Liaison Center was established in 1976, Maathai was asked if she would like to become a board member, which she then became. After the headquarters of the UN Environment Program in Nairobi were established in accordance with the UN World Environment Conference in Nairobi, the Environment Liaison Center set itself the goal of strengthening the participation of non-governmental organizations in the work of the UN Environment Program. Maathai has also joined the National Council of Women of Kenya (NCWK). Through these diverse activities, Maathai became aware that the roots of Kenya's problems lie in the deterioration in environmental conditions.

In 1974, Wangari's family took in their third child, Muta. Her husband reapplied for a seat in parliament, hoping to represent the Lang'ata constituency . He was elected to parliament. During his election campaign, he promised Kenyans to create jobs to fight rising unemployment in Kenya. Maathai was inspired during her husband's election campaign to combine her idea of ​​restoring nature with ideas against unemployment. This led to the founding of the company Envirocare Ltd . Trees were planted to preserve and restore the environment while at the same time involving local people in the work process. This led to the establishment of the first tree nursery, which was connected with the first establishment of the state tree nursery in Karura Forest. The Envirocare company had many problems primarily related to production and was eventually shut down. Nevertheless, Maathai was able to take part in the first UN Conference on Human Settlements - Habitat I in June 1976 through the United Nations Environment Program .

In 1977 Maathai spoke to the National Council of Women in Kenya about her participation in the Habitat I conference. She suggested that more trees should be planted, which was also supported by the NCWK and subsequently led to the establishment of the Green Belt Movement .

Maathai and her husband, Mwangi Mathai, separated in 1977. After a lengthy separation, Mwangi filed for divorce in 1979. Mwangi is reported to have said that Wanagari was "too strong for a woman" and that it was "impossible for him to control her". He accused her of adultery with another member of parliament and also referred to her as "mean" which, in his opinion, were the reasons for his high blood pressure. The judge ruled in favor of Maathai's husband. Shortly after the trial, Maathai claimed the judge was either corrupt or incompetent. This led the judge to find Maathai guilty of disregard of the court and sentenced her to six months' imprisonment. After three days in Lang'ata Women's Prison, her attorney made a statement that convinced the judge to release her. Shortly after the divorce, Mwangi demanded that the Maathai give up the last name she had taken from her husband when she married. Instead, Maathai decided to add another "a" to their name (Mathai - Maathai).

After the divorce, Wangari found it very difficult to support herself and her children due to her low university income, as the cost of the trial was very high and her husband's income was lost. But the UN development program gave Wangari the opportunity to work for the Economic Commission for Africa. As this job meant that she mainly worked in Lusaka, Zambia, on the one hand, and, on the other hand, was required of her to travel all over Africa, she could not take her children with her and decided to hand her children over to her ex-husband and accept the job offer. She visited her children regularly, but they lived with her father until 1985.

The Green Belt Movement is an environmental protection organization that strengthens communities, and in particular women, to protect the environment and at the same time improve living conditions and circumstances. The organization was founded by Wangari Maathai in 1977 under the auspices of Kenya's National Council of Women of Kenya (NCWK) to raise awareness of the needs of Kenyan women farmers. They reported that on the one hand their rivers dried up and thus their food security was restricted, and on the other hand they had to cover further distances in order to organize firewood. The green belt movement encouraged women to sow seeds and plant trees together to consolidate the ground, store rainwater, provide food and firewood, and receive a small monetary benefit for their work. The first trees, then only 7, were planted on June 5, 1977, World Environment Day in Nairobi.

On that day, members of the Kenyan Women's Council (NCWK) marched from the Kenyatta International Conference Center in Nairobi to Kamukunji Park on the outskirts of the city, where they planted seven trees to honor deceased people who were very active in the community. The seven trees were initially known under the motto “Save the Land of Harambee”, but then became the first “green belt”, from which the green belt movement evolved. Maathai got women in Kenya to plant tree nurseries across the country. The seeds were collected from nearby forests so that native trees could be planted. She even paid the women a small contribution if trees were planted in other places afterwards.

To date, the Green Belt Movement founded by Wangari in 1977 has planted more than 45 million trees and thus secured a source of income for many people. The initial idea of ​​environmental education and nature conservation expanded to include elements of civil and political involvement. 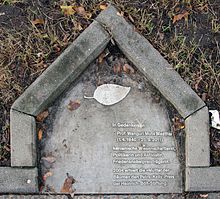 In 1984 she had already received the Right Livelihood Award (the so-called Alternative Nobel Prize ) for her work in the Green Belt Movement , which she founded in 1977 .

In 2004 she received the Nobel Peace Prize for her commitment to “sustainable development, peace and democracy”, as the declaration of the committee in Oslo says, and further: “She has chosen a holistic approach to sustainable development, democracy, human rights and especially women's rights She was honored with the award after the establishment of the Nobel Committee for her courageous resistance against the former Kenyan regime and as the founder of the Green Belt Movement.

The Nobel Peace Prize went to an African woman for the first time and to a woman for the second time after 1991/1992 in two consecutive years.

For the history of the Nobel Peace Prize, the special appreciation of environmental protection was a qualitative innovation that was welcomed by environmental politicians from all parties. At the award ceremony on December 10, 2004, the head of the Nobel Committee, Ole Danbolt Mjøs, emphasized : "Peace on earth depends on our ability to preserve a living environment."