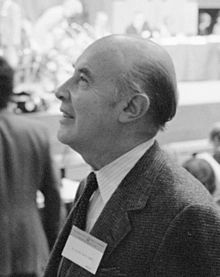 Alfonso García Robles (born March 20, 1911 in Zamora , Michoacán , † September 2, 1991 in Mexico City ) was a Mexican diplomat and politician. In 1982 he and the Swede Alva Myrdal ( Gunnar Myrdal's wife ) received the Nobel Peace Prize for his services to disarmament.

From 1946 to 1957 he went to the United Nations (UNO) and became Director of the General Secretariat. His area of ​​responsibility mainly included the Middle East and so the creation of the State of Israel in 1948 was one of his first tasks at the UN. From 1958 he took over the management of the Europe, Asia and Africa section in the Mexican Foreign Ministry. From 1962 to 1964 he was ambassador to Brazil , then until 1971 Secretario de Relaciones Exteriores (Foreign Minister).

From 1971 to 1975 Alfonso García Robles was ambassador to the United Nations, where he represented the state of Mexico. Between 1975 and 1976 he was Foreign Minister of Mexico. In 1977 he became the permanent representative of Mexico to the UN Disarmament Committee. He played an important role in the signing of the Treaty of Tlatelolco , which made Latin America a nuclear weapon-free zone. At the UN special conference, which took place for the first time in 1978, he made a name for himself primarily as an opponent of arms. As a result, he was elected chairman of the UN Disarmament Committee in 1985.

As part of this activity, he was primarily a pioneer of the disarmament talks between the USA and the Soviet Union, which resumed their talks that had been interrupted for two years in 1985. In 1986 and 1987 a contract was signed between the US President Ronald Reagan and the Soviet head of state Mikhail Gorbachev , in which both agreed to the destruction of part of their nuclear weapons. In 1991 this was made more concrete for around 30 percent of weapons, and in 1990 a treaty between the Warsaw Pact and NATO to limit conventional armed forces in Europe was signed, which came into force in 1992.