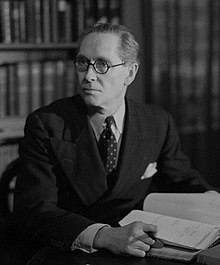 Philip John Noel-Baker, Baron Noel-Baker (born November 1, 1889 in London - † October 8, 1982 ibid) was a track and field athlete and a member of the British Parliament . In 1959 he received the Nobel Peace Prize for his work for international peace.

At the 1920 Summer Olympics, he won a silver medal in the 1,500-meter run, making him the only Nobel Prize winner with an Olympic medal.

Philip Baker was born in London in 1889 to a member of parliament. His family belonged to the Quaker religious community and was accordingly very pacifist . He went to the Bootham School, a Quaker boarding school in York , and later to the USA to Haverford College in Pennsylvania . He studied history and economics partly in Paris at the Sorbonne and in Munich , and finally completed it in Cambridge at King's College with a Master of Arts . He married Irene Noel in 1915 and changed his name to Philip Noel-Baker.

In 1912, Philip Baker became President of the Cambridge Union Society . In the same year he took part in the Olympic Games in Stockholm in the athletics competitions and was sixth over 1500 meters. In 1920 he took part in the Olympic Games for the second time, this time in Antwerp , where he won the silver medal in the 1,500-meter run. At the 1924 Summer Olympics in Paris , he acted as a British team leader, but no longer took part in the competitions. He was later inducted into the Olympic Committee and was responsible for the British Olympic teams. From 1960 he was President of the World Council for Sport and Physical Education .

In 1914 Philip Baker became the assistant director of Ruskin College, Oxford . During the First World War he went to Belgium and France, where he worked at the Friends Ambulance Unit . After the war he accompanied Robert Cecil of Chelwood to the Versailles negotiations in 1919. From 1922 to 1924 he was secretary of the British delegation to the League of Nations and from 1924 to 1929 professor of international relations at the University of London .

In 1929 he was elected to the British House of Commons as a member of the Labor Party and remained until 1931. He became private secretary to the State Secretary in the Foreign Office and was also a member of the British delegation to the 10th League of Nations Assembly from 1929 to 1931 in Geneva . At the disarmament conference from 1932 to 1933 he accompanied Arthur Henderson to Genoa as his secretary. In 1936 he was re-elected to the House of Commons and remained a continuously elected MP until 1970.

In the government of Winston Churchill from 1942 to 1945, Philip Noel-Baker was Parliamentary Secretary to the Minister for War Transportation. During this time he also tried to motivate the peoples of the world to end the war through radio addresses in several languages. After the Second World War he became Minister of State in the Foreign Ministry, where he was responsible for the problems of the United Nations . His advice and suggestions, which were incorporated into the founding and early development of the United Nations, were honored with the 1959 Nobel Peace Prize.

In June 1946 Philip Noel-Baker became chairman of the British Labor Party. In the cabinet of Prime Minister Clement Attlee from 1946 to 1947 he was Secretary of State for Aviation, from 1947 to 1950 Secretary of State for Relations of the Commonwealth and then from 1950 to 1951 Minister for Fuel Supply. As part of the Commonwealth, he was one of the main negotiating partners with India , New Zealand and Ireland , which were to remain in the Commonwealth. He subsequently appeared primarily as an opponent of armament and the stationing of American missiles in Europe. In 1955 he took part in the Consultative Assembly on the establishment of the Council of Europe and the European Union , representing Great Britain .

From 1964 to 1970 he was chairman of the parliamentary committee on foreign relations in the Labor group. He did not run for the 1970 general election and left parliament. In 1977 he was raised to life peer with the title Baron Noel-Baker , of the City of Derby , and received a seat in the House of Lords for life .

Philip Noel-Baker maintained good contacts with the reform pedagogue and peace activist Elisabeth Rotten . With it, he shared a common interest in the emerging League of Nations.