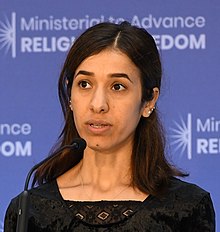 Nadia Murad Basee Taha ( Arabic نادية مراد باسي طه; * 1993 in Kocho , Sinjar , Iraq ) is a survivor of the IS perpetrated genocide against the Yazidis in 2014, Iraq ( Yezidi ) human rights activist and since September 2016, the first Goodwill Ambassador for the dignity of the survivors of human trafficking to the United Nations ( UNODC ). On December 10, 2018, she and Denis Mukwege received the Nobel Peace Prize in Oslo . She is the only Iraqi woman and Yezidi woman to have received a Nobel Peace Prize.

In a raid on her village Kocho (in Sinjar , Iraq ) by members of a terrorist acting Islamic fundamentalist militia Islamic State (IS) on August 3, 2014, lost Jesidin Nadia Murad her mother and six brothers; a total of 18 of their family members died from IS. She herself was abducted from the village and taken prisoner. During this time, she was repeatedly enslaved , raped and tortured . Murad managed to escape from Mosul with the help of a Muslim family to a refugee camp in the Kurdish border area near Dohuk .

In March 2015 in the refugee camp she learned about the special contingent for particularly vulnerable women and children from Northern Iraq , a special contingent of the state of Baden-Württemberg , which gave 1,100 traumatized women and children from Northern Iraq the chance of psychotherapeutic care and a new beginning in Germany. Murad successfully applied for admission to the program together with her sister. Since then she has lived anonymously in Baden-Württemberg; initially for two years in a shared accommodation in Heilbronn , where she attended a preparatory class at the Johann Jakob Widmann School for two months, and since the beginning of 2017 in the greater Stuttgart area , where she temporarily maintains an office. 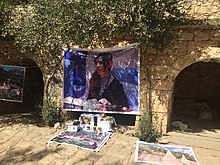 A poster of Nadia Murad's testimony before the UN Security Council at the Yazidi Shrine in Lalisch, Iraqi Kurdistan

Early on, she spoke publicly about the experiences and fate of her people, including in December 2015 before the United Nations Security Council . On 16 September 2016 she was rewarded in New York by UN Secretary General Ban Ki-Moon as "combative and restless defender of Yezidi people" excellent and Goodwill Ambassador for the dignity of the survivors of human trafficking of the United Nations Office on Drugs and Crime ( UNODC ) appointed. "The Yezidin has suffered unspeakable abuse and human rights violations in the hands of the terrorist militia and has shown great courage in fighting such crimes," said Ban, explaining the appointment.

Since the end of her captivity and her flight to Germany, Murad has been fighting for the genocide of the Yazidis to be recognized and in particular addresses the situation of women in captivity. She urges the international community not to remain inactive and advocates international prosecution of IS crimes. "The Islamic State wants the organized destruction of the Yazidi people," she said. Since September 2016 she has been supported by her lawyer Amal Clooney , who wants to bring the IS crimes before the International Criminal Court. A total of around 6,500 Yazidis were kidnapped, including 3,500 women and girls, 1,700 of whom are still under IS violence. Almost 1,300 people are believed to have been killed by IS, and 2,700 children were orphans.

After Iraqi politicians had pledged their support in Nadia Murad's nomination, the Norwegian politician Audun Lysbakken officially submitted the nomination after meeting Murad at the five-member Nobel Prize Committee. "We want a peace prize that will shake up the world to fight against sexual violence as a weapon in war," Lysbakken told the AP news agency . However, she did not receive this highest award in 2016.

At the Bambi Awards 2019 she was honored with the prize in the “Courage” category. The laudator was Winfried Kretschmann .