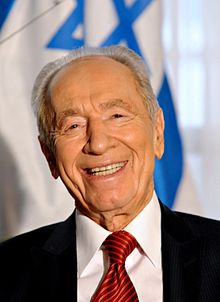 Peres was intermittently involved in several governments. He was also chairman of the Israeli labor party Avoda several times , from which he left in 2006.

Peres was Israel's eighth Prime Minister from 1984 to 1986 . After the assassination of Yitzchak Rabin , he held this office again from 1995 to 1996. He was also Deputy Prime Minister and Foreign Minister of Israel in the Ariel Sharon government from 2001 to 2002. From January 2005 he was again Vice Prime Minister in the governments of Ariel Sharon and Ehud Olmert . On June 13, 2007, he was elected by the Knesset to succeed Moshe Katzav as the ninth President of Israel. Peres began his seven-year term on July 15, 2007. Reuven Rivlin was elected as his successor on June 10, 2014 , and took office on July 24, 2014. 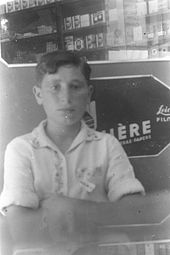 Shimon Peres was born in Wiszniew in eastern Poland, now Vishneva in Belarus, as the son of a timber merchant and emigrated to Tel Aviv with his family in 1934 . The grandfather who remained in Poland was later murdered in a synagogue fire caused by Germans. Peres was trained at the Geula School in Tel Aviv and in agriculture in the Ben Shemen Children's and Youth Village , where his wife Sonia, who is also buried here, was trained. From the age of 16, Peres belonged to the Avoda predecessor party, Mapai , and joined the Israeli trade union movement Histadrut early on, in whose youth movement he served as general secretary between 1941 and 1945.

In 1947 he joined the Hagana , the predecessor of the Israel Defense Forces , and was assigned personnel and arms procurement by David Ben-Gurion . During and after the Israeli War of Independence , he was head of the Israeli Sea Service . In 1950 Peres was sent to the United States to head a delegation from the Department of Defense . During his stay there, he studied administrative science at Harvard University . Returned to Israel, he became Deputy Director General of the Ministry of Defense in 1952 and Director General (Secretary of State) in 1953. He was largely responsible for the procurement of weapons for the young state of Israel. Among other things, he concluded a formal, but secret, agreement in 1957 with the then Federal German Defense Minister Franz Josef Strauss . The acquisition of the French Dassault Mirage III fighter aircraft and a French nuclear reactor go back to Peres' efforts .

Peres lived in the Gewa kibbutz . 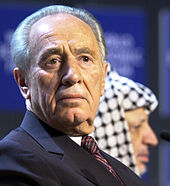 Peres and Jassir Arafat at the 2001 World Economic Forum in Davos.

In 1959 he was elected to the Knesset as a Mapai MP . From 1959 to 1965 he was Deputy Minister of Defense. In 1965 he followed David Ben-Gurion, when he left the Mapai and founded the Rafi party, whose reunification with the Mapai he operated as early as 1967. In 1969 he was appointed Minister for Immigration and Integration. In 1970 he finally became Minister of Transport and Communications.

He was involved in arms purchases and the forging of strategic alliances that were of vital importance to Israel, such as its close relationship with France, which allowed it to acquire large quantities of high-quality weapons, which influenced the regional balance of power in Israel's favor. Through Peres' mediation, Israel acquired the modern Dassault Mirage III , built the Dimona nuclear reactor, and brought about a trinational agreement with France and the United Kingdom that positioned Israel in the Suez Crisis. Peres continued to be the main mediator in the close French-Israeli alliance since the mid-1950s, although after 1958 he was often in difficult negotiations with Charles de Gaulle because of the dimona project . Peres was the architect of the secret nuclear armament program in the 1960s. In an interview he stated that in the 1960s he had recruited Arnon Milchan to work for LAKAM and thus to provide the necessary support for the nuclear program.

Between 1977 and 1992, as head of the Israeli labor party Avoda, he was also Vice-President of the Socialist International ; he held both posts again between 2003 and 2005.

Although Peres never won an election, he was three times - briefly from April 1977 after Rabin's resignation to the parliamentary elections, from 1984 to 1986 as part of a rotation agreement with the Likud politician Yitzchak Shamir (the so-called Israeli model ) and again between 1995 and 1996 after the murder of Yitzhak Rabin - Prime Minister of Israel.

Peres was a high profile critic of the Israeli invasion of Lebanon as early as 1982 and was of the opinion that the Palestinian problems could only be solved politically, not militarily. In 1985, as head of government of the ten-party "Government of National Unity", he ordered the Israeli army to largely withdraw from Lebanon.

In 1994 he received the Nobel Peace Prize together with Yasser Arafat and Yitzchak Rabin for his services in the Oslo peace process . Yitzhak Rabin was murdered by a religious fundamentalist Israeli student on November 4, 1995, and Peres took over the office of prime minister.

1996 ordered Peres after rocket attacks by Hezbollah on northern Israel called Operation Grapes of Wrath in Lebanon on, as a result during the Israeli artillery attack on Qana , the UNIFIL - headquarters destroyed and 106 Lebanese civilians were killed. The incident later cost Peres the decisive Arab votes in the lost direct election for prime minister against Benjamin Netanyahu , after he had been considered a big favorite until then. The defeat against Netanyahu was very close: Peres received 1,471,566 votes and thus 49.5%, Netanyahu 1,501,023 votes and thus 50.5%.

Yair Auron , director of the Jerusalem Institute on the Holocaust and Genocide , accused Peres of having made possible the genocides there in the 1990s by delivering arms to Serbia and Rwanda . Auron sued the Israel Defense Ministry over documents relating to Israeli arms shipments to Rwanda in 1994, but the lawsuit was dismissed on grounds of national security. His evidence comes from an eyewitness as well as from an Amnesty report from 1995. The weapons were accordingly brought from Israel and Albania to Rwanda from May to July 1994, during the massacres. After the UN embargo of 1991, Israel also delivered weapons to Serbia. Peres has refused to condemn the crimes of Milošević , who led the first genocide in Europe since the Holocaust. His government did not express the slightest condemnation of the Serbs, but opened an embassy in Serbia in 1992, when Milošević was widely regarded as the new Hitler in Europe.

In 1997 he founded the Peres Center for Peace . Peres remained a supporter of the Oslo Peace Process and the Palestinian Autonomy Process despite the First and Second Intifada . Nonetheless, in the opposition, Peres supported Ariel Sharon’s military policy of preventing suicide bombings, among other things, with the help of the Israeli army .

As Foreign Minister, Shimon Peres supported the strategic alliance with Turkey and in April 2001 refused to apply the term “ Holocaust ” to the genocide of the Armenians : “We reject attempts to create a similarity between the Holocaust and the Armenian allegations. Nothing similar to the Holocaust occurred. It is a tragedy what the Armenians went through but not a genocide. ”Since France had been excluded from the arms deal with Turkey due to the recognition of the Armenian genocide in 1915 by the National Assembly , Peres Israel secured Turkish arms contracts to the extent of over $ two billion.

Although he celebrated his 80th birthday in a large group in 2003, he was considered more than ever as a committed politician in Israel. He also joined the "government of national unity" that Ariel Sharon formed in 2005 to enforce the unilateral withdrawal from the Gaza Strip as Vice Prime Minister . In November 2005, he failed to defend the chairmanship of his party and was defeated by his challenger Amir Peretz . As a result, new elections in Israel became inevitable.

Peres was not ready to work under the new party leader Peretz, who did not want to guarantee him a secure place on the list for the 2006 elections. After long strife and intense efforts by Sharon, Peres decided on November 30, 2005, on the advice of his closest colleagues, to resign from the Labor Party and to support the newly founded center Kadima of the Israeli Prime Minister. He had been a member of the Avoda for 60 years, which he dealt a severe blow and gave the Kadima reputation. He justified this step by saying that Sharon was the most suitable person to lead a coalition for peace and security. Sharon has the best chance of reviving the peace process with the Palestinians. After Sharon fell ill, Ehud Olmert took over as acting Prime Minister and top candidate for Kadima Sharon's offices; in April 2006, Olmert was elected Prime Minister of Israel. Shimon Peres himself ran for second place on the list.

On May 28, 2007 Shimon Peres was again nominated, now by the Kadima, as a candidate for the Israeli presidential election on June 13, 2007. On May 30, Peres issued a public statement confirming his candidacy for president. In the June 13 election, Peres initially received 58 votes in the first ballot. The two opposing candidates Reuven Rivlin (Likud) and Colette Avital (Awoda) decided not to participate in the second ballot, in which Peres finally received 86 votes and was thus elected the new President of Israel. On July 15, 2007, he was sworn in as president and succeeded Moshe Katzav, who resigned on July 1, 2007.

Due to his great reputation in the international public and within diplomatic circles, Peres often acted as a mediator of Israeli political concepts. He also defended Israel's security policy in the fight against terrorism and the construction of Israeli barriers against international criticism.

In his speech to the German Bundestag on January 27, 2010 on the occasion of the commemoration on the day of commemoration of the victims of National Socialism , Peres recalled the fate of his family in his birthplace Wiszniewo:

“When the Nazis marched into Wiszniewo, they ordered all Jews to assemble in the synagogue. My grandfather went in first, wrapped in the same prayer shawl that I wrapped myself in as a child. His family followed him. The doors were bolted from outside and the wooden building was set on fire. All that remained of the entire community was glowing ashes and smoke. "

He did not run for the presidential election on June 10, 2014, and Reuven Rivlin was elected as his successor.

Peres was married to Sonja Peres (née Gelman) from 1945 until her death in January 2011. The marriage resulted in daughter Tsvia, a linguist, and two sons, Yoni, a veterinarian, and Chemi, chairman of Pitango Venture Capital, one of Israel's largest venture capital funds. Shimon Peres was a cousin of Lauren Bacall .

On September 13, 2016, Peres suffered a stroke , after which he was placed in an artificial coma . In the early morning of September 28, 2016, he died of a cerebral haemorrhage .

Shimon Peres was on 30 September 2016, the cemetery of the Herzl Mount ( Mount Herzl National Cemetery buried).