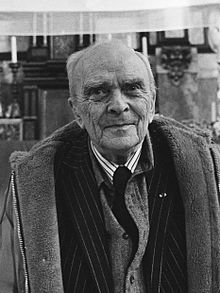 Seán MacBride ( Irish Seán Mac Giolla Bhríde ; born January 26, 1904 in Paris , † January 15, 1988 in Dublin ) was an Irish politician. In 1974 MacBride received the Nobel Peace Prize together with Satō Eisaku for his longstanding commitment to human rights in a wide variety of functions and organizations.

Seán MacBride was born in 1904 to the Irish officer and freedom fighter John MacBride and the actress Maud Gonne . His father was executed in 1916 as a participant in the Easter uprising against the British, so Seán was raised by his mother, who was also a revolutionary. He went to the church school Mount St. Benedict in Gorey and was arrested for the first time as a rebel against the British at the age of 14. He rejected the Treaty of Independence of Ireland in 1921 because the counties of what is now Northern Ireland remained in British hands, and accordingly he continued to participate in the War of Independence . After the Irish Republicans were defeated , he went to London and became a journalist for the Morning Post .

In 1926 he came back to Ireland and joined the Irish Republican Army (IRA). In 1928 he became a member of the army leadership, in which he held various offices, in 1936 finally its chief (Chief of Staff). With the constitutional amendment in 1937, however, he broke his ties to the organization again and studied law at the University of Dublin; then he worked again as a journalist. He was admitted to the bar in 1938 and during the Second World War he mainly defended Irish Republicans who were imprisoned for being members of the IRA.

After the war, Seán MacBride and other colleagues founded the Clann na Poblachta party and was elected to the lower house of the Irish Parliament ( Dáil Éireann ) from 1947 to 1958 . From 1948 to 1951 he was Irish Foreign Minister . In this role he played a key role in the successful adoption of the European Convention on Human Rights . In 1954 he was a delegate from Ireland to the Council of Europe until 1957 and was also rapporteur for the Monetary Commission.

In 1961, Seán MacBride was one of the founders of the human rights organization Amnesty International together with Peter Benenson . From the year it was founded, he was president of the organization and campaigned for its goals and ideas worldwide. Above all, he was able to use the good contacts he had built up as Foreign Minister and member of the Council of Europe.

MacBride also held a number of senior positions in the International Peace Bureau and from 1963 to 1970 Secretary General of the International Commission of Jurists . In 1973, MacBride was elected United Nations Commissioner for Namibia and remained in office until 1977. Here he should support the efforts of the South West Africa People's Organization (SWAPO) and promote the liberation of the country. In 1977 he was part of a UNESCO working group that was supposed to investigate problems of international communication. He criticized the fact that the developing countries were also dependent on the industrialized nations in the media sector.

In addition to the Nobel Peace Prize in 1974 MacBride received a number of other awards, including the Lenin Peace Prize in 1977, the American Medal of Justice in 1978, the UNESCO silver medal in 1980 and the ALECSO gold medal in 1985. He was awarded an honorary doctorate at five universities. He died in Dublin in 1988.

The Sean MacBride Peace Prize is named after him.

Foreign Minister of the Republic of Ireland