About 250 years ago dogs appeared in England for the first time, believed to be the ancestors of today's Staffordshire Bull Terriers. They were small, beefy dogs that were kept and bred by the miners of the "Black Country" (Central England around Birmingham and the county of Staffordshire ). At that time they lived with their owners in the narrow apartments of the workers' settlements and were therefore not allowed to be too big.

Originally and similar to the Yorkshire terrier , their function was to destroy rats . "Rat biting", a bloody sport in which the dog won, which killed as many rats as possible in the shortest possible time, developed from rat hunting. Subsequently - from approx. 1810, although initially under a different name - the Staffordshire Bull Terrier was a clearly separated breed of dog and was the preferred line of attack dogs for dog-to-dog fights in England's Staffordshire county . The Bull-and-Terriers, as the breed was called back then, became status symbols of the working class in the coal regions. Races and dog fights - also through betting at such events - were, in addition to selling the puppies, an opportunity to supplement the meager income from working underground.

In 1835 England was the first country in Europe to ban animal fighting, and the breeding of these dogs from then on concentrated on their other strength, their great family suitability - which they brought with them from this time. In 1935 this breed was then recognized as a separate breed by the Kennel Club , the association of English dog breeders ; since then the breed standard has changed not insignificantly (1948 and 1987). The change that had the biggest impact was reducing the desired height by 5.1 cm without adjusting the maximum weight, which made the Staffordshire Bull Terrier a rather heavy dog ​​for its size. According to the breed standard, intelligence as well as a pronounced human and child friendliness are among the primary breeding goals. In Great Britain, the Staffordshire Bull Terrier is now one of the most common dog breeds. In the statistics of the Kennel Club , with 12,629 registered dogs, he is only a good 100 dogs behind the German Shepherd in fifth place.

A name similarity exists to the American Staffordshire Terrier , a breed originating from the USA that developed from the same ancestors at the end of the 19th century, but is slightly larger.

Staffordshire Bull Terriers grow to be 35.5 to 40.5 cm tall. Males weigh 12.7–17 kg, bitches 11–15.4 kg. The head is broad and short and has rose or half-ears. The smooth, short and dense coat is red, fawn, white, black or blue or one of these colors combined with white, brindle in any shade or brindle with white.

The FCI describes the ideal image of the character of the Staffordshire Bull Terrier in the breed standard as follows: “Traditionally of indomitable courage and tenacity. Highly intelligent and loving, especially with children. Brave, fearless and absolutely reliable ”. This defines a breeding goal for the breed clubs that breed according to this standard. There is no empirically proven statement about the nature of the breed or even individual dogs. In any case, they should be used to other dogs early and well, without having bad experiences. 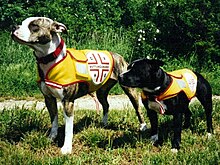 In most of Germany's federal states, the Staffordshire Bull Terrier is considered a dangerous dog . Rattlists lead him mostly in the highest category, and he is subject to strict limitations holder. The import of this breed into Germany is prohibited.

In Austria , the Staffordshire Bull Terrier is on the breed list in all three list-leading federal states ( Vienna , Lower Austria , Vorarlberg ). Depending on the federal state, a “ dog handler's license ” (Vienna), “ certificate of competence ” (Lower Austria) or a special permit from the mayor (Vorarlberg) is required.

In Switzerland , eleven of the thirteen cantons with rattle lists have the Staffordshire Bull Terrier on their lists; in these cantons, approval is required for keeping it. Breeding, importing and keeping are prohibited in the cantons of Valais and Zurich .