Staffordshire [ stæfədʃɪə ] is a county ( County ) amid the Midlands of England . The seat of the county is Stafford . Portions of the National Forest are within the boundaries of the county. It is surrounded by the counties of Cheshire , Derbyshire , Leicestershire , Warwickshire , West Midlands , Worcestershire , and Shropshire .

Major cities in Staffordshire include Stoke-on-Trent , Burton-upon-Trent , Newcastle-under-Lyme , Tamworth and Stafford itself.

The historic county of Staffordshire also included Wolverhampton , Walsall , and West Bromwich . With the administrative reform of 1974 these were transferred to the new Metropolitan County West Midlands . As a result of the division, a small strip of the area leads directly to Worcestershire . Stoke-on-Trent was later spun off into an independent urban district in the 1990s.

Other cities and settlements in the county

Newcastle-under-Lyme has a repertory theater (theater with regular actors like in Germany), while in the other cities of the county there are only performance venues in which changing touring companies (touring theater, musical, opera or ballet ensembles) for short periods Give time to guest performances.

The county's culinary specialty is Staffordshire Oatcakes , a type of hearty pancake made from oatmeal. They are sold cold and empty in the supermarket, but are particularly popular as a filled fast food fresh to hand or as a main meal in tea rooms. The oatcakes can be topped up as you like and are usually always gratinated with cheese; frequent variants are cheese-fried ham-tomato and cheese sausage (British soft sausage). They are served either "open" (tea room), folded or rolled, depending on the sale and consumption.

The mascot and pride of the county is the Staffordshire Bull Terrier . Exhibitions are held in the area almost every weekend. This breed is part of the regular street scene. 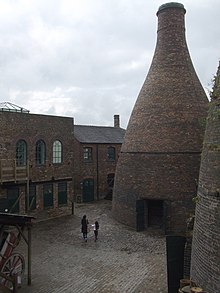