The administrative counties in England from 1888 to 1974

The English administrative structure from 1888 to 1965

The layout of the traditional counties of Cambridgeshire , Lincolnshire , Northamptonshire , Suffolk , Sussex and Yorkshire has been changed by splitting them into new administrative counties ; these were based on the already existing division of the Court of Quarter Sessions . In addition, the County of London was created, which included those boroughs that are now referred to as Inner London . The Isle of Wight initially belonged to the administrative county of Hampshire , but received its own county council in 1890.

In 1894 a uniform two-tier system was created: the administrative counties were on the upper tier, and the second tier was divided into urban districts , rural districts and municipal boroughs . The county boroughs are not listed as separate administrative units on the map below . The resulting system was the basis for the Ceremonial Counties , which was created for the sake of the Lord Lieutenancy . Here, however, Cambridgeshire, Hampshire, Lincolnshire, Northamptonshire, Suffolk and Sussex were not divided.

With increasing urbanization and the expansion of the suburbs , more and more areas that had previously belonged to one county extended into the area of ​​another. But because boroughs , urban districts and parishes could not go beyond the boundaries of a county, the boundaries of the administrative counties were changed several times in the following period.

In 1965 the County of London was dissolved and merged into Greater London . Was also dissolved Middlesex , the rose almost completely in Greater London, the residue was counties Surrey and Hertfordshire assigned.

The following map shows the boundaries of the county boroughs .

Administrative Counties of England from 1965 to 1974 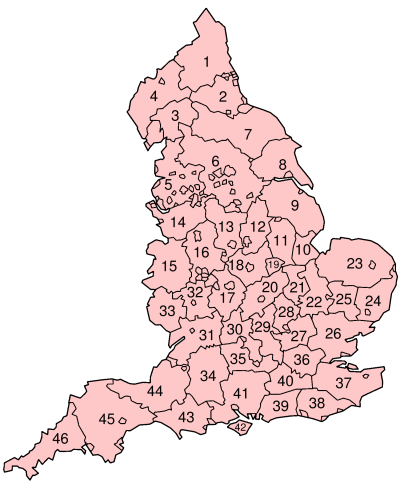 The English administrative structure from 1974 to 1995

In the late 1960s it became apparent that the structure of local government was in need of reform. The Labor government under Harold Wilson set up a commission to reform the administrative structure.

The report prepared by the Commission proposed the abolition of two-tier management. Instead, 59 unitary authorities should be created, the layout of which should completely ignore the previous borders of the administrative areas and were based on geographic conditions. In the metropolitan areas of Merseyside, South East Lancashire and North East Cheshire as well as around Birmingham three metropolitan areas with 20 district administrations were to be established.

The Conservatives, led by Edward Heath , turned against this reform proposal . After they won the 1970 elections, they drew up their own administrative scheme. The concept of unitary authorities was rejected; rather, the entire area of ​​England and Wales should be divided into administrative counties and districts in a two-tier system. In England, the proposed redesign of the counties was based on the existing ones, but also included some fundamental changes.

Despite assurances that traditional counties would not formally be abolished and no one would be expected to change their loyalty as a result of the proposed territorial reform, the plan met with considerable resistance from the counties. As a result, most of the fundamental changes have been removed. On the question of the amalgamation of small counties, however, the government was adamant; Initiatives to keep Rutland and Herefordshire unsuccessful.

The main point was the creation of the Metropolitan Counties :

In 1986, the Margaret Thatcher government abolished county councils in metropolitan counties. These were preserved as such; The Metropolitan Boroughs have been performing their administrative tasks since then . 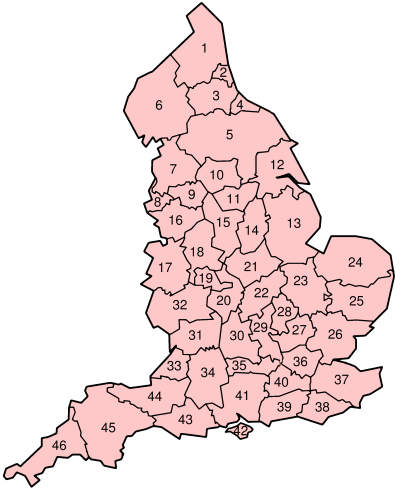 1 not a county, but a region

Administrative and territorial reforms between 1995 and 2020

In the 1990s, the county boroughs , which were abolished with the 1974 local government reform, were reintroduced in the form of the Unitary Authorities . As a result, the administrative landscape changed considerably in several steps:

On April 1, 1995, the Isle of Wight became a Unitary Authority. Until then, there was a two-tier system consisting of the Isle of Wight County Council and the Boroughs of Medina and South Wight . At the same time, two small areas of Surrey and Buckinghamshire came to Berkshire , which has since bordered Greater London .

On April 1, 1996, the 1974 newly formed counties of Avon , Humberside and Cleveland were abolished. Their previous districts became unitary authorities. At the same time, the area of ​​the City of York was expanded, made a unitary authority and administratively detached from North Yorkshire .

On April 1, 1998, the districts of Blackpool , Blackburn with Darwen , Halton , Medway , Nottingham , Peterborough , Plymouth , Swindon , Stoke-on-Trent , Southend-on-Sea , Telford and Wrekin , Torbay , Thurrock and Warrington became Unitary Authorities . Hereford and Worcester was dissolved and replaced by the Unitary Authority of Herefordshire and the county of Worcestershire . Berkshire was divided into six Unitary Authorities and its county council was abolished, but it was formally dissolved as a county.

On April 1, 2009, the old districts were abolished in Bedfordshire , Cheshire , Cornwall , Durham , Northumberland , Shropshire and Wiltshire and Unitary Authorities were established across the board, so that there is now only a single-level administrative division in these counties.

On April 1, 2019, the old districts in Dorset were repealed and Unitary Authorities were established across the board. At the same time, several districts were merged in Somerset and Suffolk .

Buckinghamshire Unitary Authority was formed on April 1, 2020 when the districts of Aylesbury Vale , Chiltern , South Bucks and Wycombe merged.

The administrative structure of England since 2020

Counties and Unitary Authories since 2009

Sometimes Berkshire is also counted among the non-metropolitan counties. Berkshire has no administration at the county level and is divided into six Unitary Authorities, but they do not have county status.

Unitary Authorities are administrative units in which the tasks of a non-metropolitan county and a district are combined in one local authority. In England there are 50 unitary authorities with county status:

The six districts in Berkshire ( West Berkshire , Reading , Wokingham , Bracknell Forest , Windsor and Maidenhead and Slough ) and the Isles of Scilly are also Unitary Authorities, but do not have county status.