This article deals with the British city. For other locations of this name, see Reading (disambiguation) .

Reading [ ˈɹɛdɪŋ ] is a city in United Kingdom . It is a unitary authority within the county of Berkshire and is located at the confluence of the Kennet and Thames , halfway between London and Oxford . 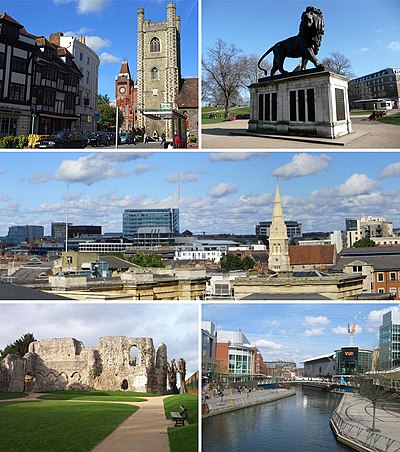 When Reading first settled in 870, ship travel was important: In Reading, the smaller River Kennet flows into the Thames. To date, the River Kennet and can Kennet and Avon Canal with a Narrowboat way to Bath or Bristol are traveled, but this waterway now used mostly only the recreational boating.

On January 4th, 871, King Ethelred of Wessex fought here against a Danish invading army and lost the battle .

Reading received the decisive impetus for growth from the Benedictine Abbey of Reading, which was founded in 1121 and has a supraregional religious and political significance. Reading was given its first town charter in 1253 by King Henry III. awarded. Between the 12th and 16th centuries, the abbey and the emerging merchants' guild fought for privileges in the city. In the middle of the 17th century Reading was badly affected by the then raging English Civil War . In 1688 a battle between the Jacobites and the troops of William of Orange took place here. In addition, trade in the city, especially in cloth, began to decline in the 17th century. In the 18th century, the trade in malt was predominant.

From its founding in 1822 until its temporary closure in 1972, the Huntley & Palmers bakery factory had both its headquarters and production facilities in Reading. In between, Huntley & Palmers was the largest baked goods manufacturer in the world.

The name Reading is derived from the Old English word read , which corresponds to the German word red. The ea is pronounced as a short e.

The city is now an important business location and the seat of the British headquarters of Oracle , Verizon and Microsoft . But one of the few British solar companies, Suntaics , is also headquartered here. The Yell Group , Logica and the BG Group also have their headquarters in Reading .

In addition to its economic importance, Reading is also a center of education. The University of Reading is attended by around 17,500 students and is at the top of the national rankings . The university library houses the world-famous Samuel Beckett archive.

Reading is also home to the European Center for Medium Range Weather Forecasts, the ECMWF . Numerous national weather services obtain the basis for their forecasts from him.

Reading is accessible by direct train from London Paddington (30 minutes) and London Waterloo . The city is on the M4 motorway .

The city is known worldwide above all for the " Reading Festival ", an annual rock festival that usually attracts thousands of spectators. Oscar Wilde's poem The Ballad of Reading Gaol refers to his detention in the local prison between 1895 and 1897. In 1998 built Madejski Stadium to play the football -Verein Reading FC and the Rugby Union -Verein London Irish .

Reading has partnerships with the following cities: