This article describes the English city of Leicester , for other meanings see Leicester (disambiguation) .

Leicester (  [ ˈlɛstə ] ) is a city in the English East Midlands on the Soar . It is traditionally the administrative seat of the county of Leicestershire in the United Kingdom of Great Britain and Northern Ireland and lies on the edge of the English National Forest .

The city is on the M1 Motorway and on the long-distance railway line between London and Sheffield ( Midland Main Line ).

The main industries in Leicester today include the production of food, jerseys , shoes , knitwear and machinery. There is also the electronics industry, printing and plastics processing companies.

The city center is mainly built in the Victorian style , later buildings fit in quite well. The heart of the city center is the clock tower, which stands at the intersection of five streets leading into the city. Today two of these streets are pedestrianized. Nearby is Leicester Market, the largest covered market in Europe.

The historic core of the city is a little west of the center. This is where Leicester Castle, the Cathedral , the Church of St. Mary de Castro and the Jewry Wall can be found.

Leicester is one of the oldest cities in England; its history goes back almost 2000 years. The city was founded by the Romans around 50 AD as a military camp . The Romans called these Ratae Corieltavorum (also Ratae Coritanorum); the name is derived from the Corieltauvi, a Celtic tribe that lived in this area before the Romans. Ratae Coritanorum became an important commercial and military center and one of the largest towns in Roman Britain .

When the Roman soldiers left Britain in the 5th century, the place was largely uninhabited, but was later repopulated by the Saxons . Part of the Roman road network can still be seen today.

It is believed that the name "Leicester" from the words castra, Latin for "field, war camp", and Ligore "residents on the river Legro" (the former name of the Soar ) - is formed. In the 8th century the place is mentioned as Legro Ceaster . Three centuries later it is listed in the Domesday Book as Ledecestre . This name has evolved over time to today's "Leicester".

In the 9th century the city was conquered by the Vikings and became one of the five boroughs (fortified cities) in the Danelag . The Bishop of Leicester then fled to Dorchester-on-Thames , and Leicester did not form an independent diocese until the 20th century .

In the Middle Ages, Leicester gained some importance, in the Domesday Book it is recorded as 'civitas' (city). However, Leicester lost its status as a city in the 11th century in the power struggle between the church and the nobility. It was not until 1919 that Leicester was granted city rights again.

Rapid industrialization began with the construction of the Grand Union Canal in the 1790s, connecting Leicester to London and Birmingham . At first jerseys and shoes were mainly produced, then mainly machines in the 20th century.

With the opening of the Leicester and Swannington Railway , the railroad reached Leicester in 1832. In 1840 the city was connected to the national rail network by the Midland Counties Railway - this gave a further boost to industrial growth. Since 1900, the Great Central Railway offered an alternative rail link to London until the line was closed in 1966; A museum railway now operates on the section from Leicester North to Loughborough .

The Borough of Leicester grew during the 19th century; In 1892 the places Belgrave , Aylestone and North Evington were incorporated. Leicester became one of the county boroughs , which were abolished in 1972, so that Leicester first became a district of Leicestershire , but in 1997 then became a Unitary Authority and thus an administrative unit that was again independent of Leicestershire . The city is now part of the ceremonial county of Leicestershire only for the purposes of the Lord Lieutenancy .

In the decades after World War II , many immigrants from the Indian subcontinent moved to Leicester; In the early 1970s, many people came from Uganda , also predominantly Indian. Immigrants make up about 40 percent of Leicester's population; making the city one of the most ethnically diverse in the United Kingdom . Leicester is now widely seen as a model of tolerance, although the neo-fascist British National Front recorded high votes in the 1970s. At the 2011 Census , 50.6% of the residents of Leicester were white, 37.1% were Asians, 6.3% were black; 33.6% of the city's residents were born abroad. Based on developments in recent years, it is expected that Leicester could become the first major British city with a non-white majority of the population.

In the COVID-19 pandemic , the government focused particularly on Leicester in mid-2020 because the city stood out with high numbers of infected people within Great Britain.

The cultural sites include

The two best-known sports clubs are the Leicester City soccer club , which became English champions for the first time in the 2015/16 season, and the Leicester Tigers rugby union team . There is also the Leicester Riders basketball team and the Leicestershire County Cricket Club . The three-time snooker world champion Mark Selby is from town. The British and World Championships in track cycling took place in Leicester . The two largest stadiums are King Power Stadium (football) and Welford Road Stadium (rugby). Leicester's speedway team, the Leicester Lions, competes in the British Elite League.

The daily Leicester Mercury is published every weekday . The BBC operates the studio for the radio program BBC Radio Leicester in Leicester . 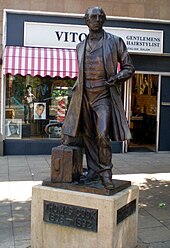 → Main article : List of sons and daughters of Leicester

Leicester has twinned cities with