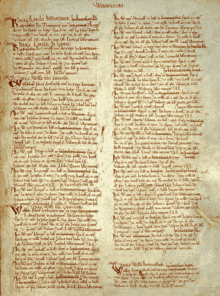 Page of the Domesday Book

The Domesday Book [ ˈduːmzdeɪ ˌbʊk ], English "Book of the Day of Judgment ", originally King's Roll or Winchester Roll , is a land register of England that records the results of nationwide investigations in the 11th century in Latin . The book's unusual name became common in the century after the survey. He was referring to the fact that the real estate relationships recorded in the Domesday Book were considered legally "final".

Threatened by an invasion, King William I (the Conqueror) ordered at Christmas 1085 that his own and taxable property of his subjects be systematically recorded. From January 1086, his emissaries combed the country as planned and determined not only the properties and their owners, but also the number of male residents. Domesday here has the meaning of final , i.e. H. later the ownership stipulated in the Domesday Book should no longer be contestable.

The background to the measure was the property structure in England that had grown over centuries, which was largely based on customary law : peasants and nobles had land and rights that were not documented in writing, as only a few people could read and write, and through gifts, sales and inheritance etc. the lands were severely fragmented. Thus, prior to the Domesday Book, the Norman conquerors had no reliable information that could serve as a basis for calculating expected tax revenues. Since Wilhelm almost constantly waged war against internal and external enemies, he was dependent on being able to reliably estimate the expected tax revenues and the number of the population conscripted. The creation of the book marked the first census in England and an important step on the way to centralizing power away from the local nobles and towards the royal court.

The book, which was written in two volumes, was not continued after 1090, but it presents the circumstances of the period considered in great detail. From then on, any legitimation of land ownership arose from this register, which can still be used today. Since Wilhelm II of England , the distribution of the army load according to so-called knightly fiefs and the precise formation of burdens and legal relationships of the English feudal system have been regulated with the help of the Domesday Book . The English Exchequer , based on the Domesday Book, was created in just 50 years . Despite verifiable gaps, the work gives indications of the country's population at that time, which must have been around 2 million.

The Domesday Book is kept in The National Archives in Kew (London) . It was officially printed in 1783 in two folio volumes with supplements. Better separate prints have appeared from individual counties since 1862. The last complete edition is the CD-ROM "Domesday Explorer, Version 1.0" from 2000.

Half of the land that was given as a secular fiefdom under William the Conqueror in England belonged to only eleven men, who were also almost all of William's blood relatives:

Some passages from the Domesday Book