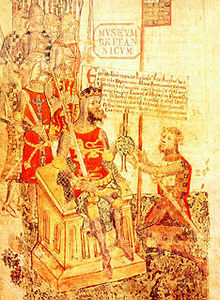 Alain the Red (Latin: Alanus Rufus , French: Alain le Roux , English: Alan the Red or Alan Rufus ; † uncertain: August 1093 ) was a Breton nobleman. During the Norman conquest of England , he was one of the main supporters of William the Conqueror . The king's favor made him one of the richest magnates in England.

Alain was the second of at least seven children of Count Odo von Penthièvre and his wife Orguen (also Agnes ) von Cornouaille . His father was a younger son of Duke Gottfried I of Brittany . After the death of his older brother, Duke Alain III. his father was ruler of Brittany from 1040 to 1047 . In medieval lore, he was often confused with his cousin, Duke Alain Fergant . The mother of Alain's father was an aunt of Duke Wilhelm II of Normandy . Alain's mother was from Anjou. Alan received his nickname Rufus ( the red ) to distinguish it from his younger brother Alan Niger (the black) . Due to the status of their father, he and his brothers were allowed to call themselves Count ( Comes ) on account of their honor .

Participation in the conquest of England

Together with his father and some of his brothers, he was first mentioned in a document from Anjou around 1050. Presumably he entered the service of his great cousin Wilhelm II of Normandy before 1066. During the conquest of England and the Battle of Hastings , William II was also supported by Breton troops, including Alain and his brother Brien. The poet Wace described Alain in his novel de Rou in the 12th century as the leader of the Breton contingent of the invasion force. After Alain's brother Brien had apparently returned to Brittany after 1069, Alain the Red was undoubtedly the most senior Breton in England. Had become of Duke Wilhelm, I. Wilhelm as English king, he probably received lands in Cambridgeshire .

After the failed uprising of the Counts in 1075, he received lands from the rebel Ralph de Gaël in East Anglia . He had acquired other properties in Suffolk and Norfolk. Together with his two followers Aubrey de Vere and Harduin de Scales , Alan is mentioned as an important landowner in the Inquisitio comitatus Cantabrigiensis and Inquisitio Eliensis , two forerunners of the Domesday Book . After The Harrying of the North he received the core of the Honor of Richmond in 1070 , which mainly included possessions in Yorkshire and Lincolnshire . Parts of the honor extended to Northampton and London. He built Richmond Castle as the center of his possessions .

As a close follower and confidante of William the Conqueror, he also took part in his campaigns in Normandy and Maine and witnessed numerous documents. Since he loyally served both the conqueror and his son and successor Wilhelm II Rufus , he was less conspicuous than numerous other magnates who at times rebelled against the kings. During the revolt from 1087 to 1088 he was one of the most important supporters of Wilhelm Rufus. He also played an important role in the crackdown on the revolt of William of St Calais , Bishop of Durham. Before 1086 Alan gave parts of his possessions to about 40 vassals , all but two of which were Bretons. Among them were Alain's illegitimate half-brothers Ribald , Bodin and Bardulf , their wet nurse Orwen is also called. His estate earned him over £ 1,100 a year. Alain was now one of the richest and most powerful nobles in England. In the Domesday Book of 1086 he is named as the owner of 440 estates in a total of eleven counties.

Alain the Red died in 1093, maybe in August. His younger brother Alan Niger, who probably came to England after his death, became his heir. After his death in 1098, Stephan I von Penthièvre , another brother, inherited the estates in England, who had already inherited her father's goods in Brittany. His son Alain de Bretagne became the first Earl of Richmond.

The death dates of Alain the Red and Alan Niger led to numerous mix-ups, but are evidenced by a letter from Archbishop Anselm of Canterbury and by documents from St Mary's Abbey in York. According to Anselm's letter, both Alain der Rote and Alain Niger had a relationship with Gunhild , a daughter of the former Anglo-Saxon King Harald II. Anselm referred to her as a nun, but her status is unclear, as she apparently had a voluntary relationship with the two Bretons and may even have married her. On the other hand, there is no proof of marriage for either Alain the Red or Alan Niger. Alain was the founder of St Mary's Abbey in York, which he founded in place of an older church dedicated to St. Olav ( St. Olave's Church ). To this end, he founded Swavesey Priory in Cambridgeshire, which was a subsidiary of the Saint-Serge monastery in Angers . He also made donations to St Edmunds Abbey in Suffolk. He was also buried in St Edmunds. Later, at the instigation of the monks, his bones were transferred from St Mary's to York.

The richest Brit ever

Alain the Red is said to have had a fortune of £ 11,000 at his death, which was about 7% of the net income of England at the time. In 2007, due to inflation, this corresponded to a value of 81 billion pounds or 103 billion euros, making him the richest person who has ever lived or is still alive in Britain. On the Forbes list of the richest historical personalities, he has been in ninth place since 2008 with 166.9 billion US dollars, ahead of personalities like Amenhotep III. , Bill Gates or Howard Hughes .