This article deals with the breastfeeding woman - for other meanings, see wet nurse (disambiguation) . 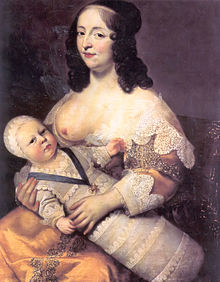 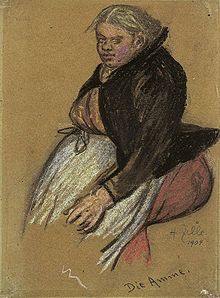 In the original sense of the word, every nursing woman is a wet nurse, so the term wet nurse is actually a special meaning of the word for women who breastfeed a stranger's child for a fee. Breastfeeding is translated as amme in Norwegian and Danish , in Swedish it is called amma or amning .

The infant breastfed by the (wage) wet nurse used to be called Amming ; this word has gone out of use today. The biological children of the (wage) wet nurse became " milk siblings " of the Amming (compare breast milk ). The verb ammen can be translated as child care or care at all. The term “ midwife ” does not come from wet nurse .

Breastfeeding one's own children through wages has been documented since ancient times. The worship of Hittite-Hurrian nurses, obstetricians and midwives goddesses is known from the ancient Orient .

The Babylonian code of Hammurapis (approx. 1780 BC) contained a separate paragraph for wet nurses, in ancient Egypt they often had a high position in families and at court, the Old Testament reports on the death of Deboras, Rebekah's wet nurse , as an important person. In Roman mythology , the wet nurse of the later founders of Rome , Romulus and Remus , who were abandoned as infants , was a she-wolf.

In her work on the six wives of Henry VIII, the British historian Antonia Fraser names the (false) assumption that breastfeeding women cannot become pregnant as a reason for using wet nurses. However, upper-class women should have as many children as was somehow possible in order to secure the succession, which is why they were not allowed to breastfeed their children themselves.

Yet in 1880 were in the cityscape of Berlin outgoing with their foster children nurses from the Lower Lausitz in their Sorbian costume : striking (popularly Wennste 'ne Spreewaldamme 're selling | you jenährt as Rangen, | kannste then, are wennste twenties, | det her not valangen. ). In Vienna, too, wet nurses from Bohemia and Moravia have become legendary in town houses alongside the cooks who came in the second half of the 19th century. Breastfeeding through wages declined sharply in Europe from around the 1920s / 1930s, when usable substitute milk became available. In Berlin this was also made visible by the fact that the conspicuously dressed Spreewald and Iglauer women almost completely disappeared from the streets.

In Bern , the last professional wet nurses were retired in the 1950s .

Mothers, be
the wet nurses of your children yourself ! (propagandistic copper engraving, France 1784)

Both single and married women hired themselves as wages. A job as a wet nurse was in some cases the only way out of a social misery for a single mother and could often mean social advancement to better conditions. As a rule, the wet nurse had a high position in the household and was well fed. Because it was believed that bad moods passed through the milk to the child, the wet nurse was often given preferential treatment.

In urban society, it became customary in some places to hand infants over to peasant women, who took them in as part-time wet nurses without regular visits. In France in particular, campaigns were carried out in the 18th century to curb this development and its consequences.

Hiring foreign wet nurses was criticized early on. The health of the wet nurse could not be determined with certainty and it was assumed that some diseases could pass through the milk to the child. From the 19th century, medical checks were prescribed in various countries prior to the placement of wet nurses according to the current state of science.

It is sociologically significant that - especially in the European upper and upper middle class up to the threshold of the 20th century - mothers distanced themselves from their small children at an early age and gave up wet nurses who became an integral part of the household . This often resulted in a respectful social distance to the biological mother for the growing children , but an intimate social closeness to the familiar wet nurse, which was taken up as a frequent motif in poetry.

The holy twin brothers Kosmas and Damian , as healers, are among other things also patron saints of wet nurses.