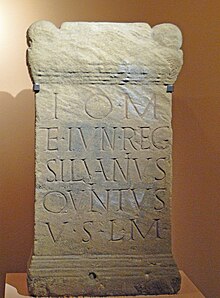 The Roman mythology deals with the ideas of the ancient Roman mythographers about the world of gods and heroes . The original Roman peasant religion was predominantly dominated by personifications of nature and natural events (e.g. Tellus "earth", ops "harvest", Ceres "field crops"). Only from the 5th century BC Chr. The Romans began under the mediating influence of the Etruscans , the gods of the Greeks to import. Many figures of the Roman heavenly gods correspond to those of Greek mythology, but Roman mythology is not as populated as the Greek with gods and heroes. The equation of foreign gods with one's own, the so-called Interpretatio Romana , became a special characteristic of the Roman dealings with foreign cults and religions.

The Roman heaven of gods was extensive and, in addition to the gods, also included spirits, personifications, demigods and many monsters. In addition, there were numerous deities who were worshiped in the provinces or whose worship came to the Roman Empire via the provinces .

The Romans were very afraid that a god would be forgotten. So they worshiped the novensiles, that is, collective deities of dark meaning, which led the historian Cincius Alimentus to the following explanation:

“The Romans used to spread the belief in gods of the subjugated cities partly privately in the families, partly to elevate it to a state cult. So that one of the gods would not be ignored because of the number or because he would be unknown, they were all summarized without further ado and given the one and the same name 'Novensiles'. "

Other Roman historians disagreed with this derivation from the word “novus” and based their explanation on the word “novem”: they were about nine gods or nine muses .

The cult provided for the sacrifice of animals, plants and other things. Here, the rite had to be carefully observed, since every mistake would provoke the wrath of the deity and would have to be performed again after an atonement. A slip of the tongue in the text was enough to conjure up dangers. Signs and prophecies also played an important role. These were partly linked to the victims; so was z. B. read out from the organs of the sacrificed animals whether the gods favored a project. The observation of the flight of birds also served this purpose. At the head of the priests stood the Rex sacrorum , the pontifices , in which the flamines were combined and the vestals . In addition to these, there were numerous colleges ( Augurs , Haruspices , Quindecimviri , Septemviri ) and cult associations ( Arval Brothers , Fetiale , Luperci, Salier , Titier , Augustales Claudiales, Augustales Flaviales, Augustales Hadriani, Augustales Antoniani).

The residence and the house of the Roman family were also places where rites were performed, see Genius loci , Laren and Penaten . 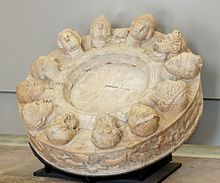 Twelve Gods Altar in the Louvre

The twelve Dei Consentes were especially venerated . In her honor there was a common temple in the Roman Forum , the Porticus Deorum Consentium . The Etruscans worshiped a number of twelve supreme gods, but the Roman gods were identified with the Olympian gods of the Greeks. Today the original gods are called Dei ingentes and their descendants Dei novensiles .