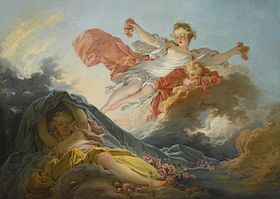 Aurora is the Latin name for the dawn . In Latin works, the name Aurora therefore appears in place of the Greek goddess Eos , and it is often not possible to distinguish between a poetic designation of the daybreak and a personal goddess. Since the Greek Eos is the sister of the sun god Helios and the moon goddess Selene , the Roman aurora is accordingly the sister of the sun god Sol and the moon goddess Luna . A Roman mythography independent of the Greek does not exist.

Among the Etruscans , she corresponded to the goddess Thesan .