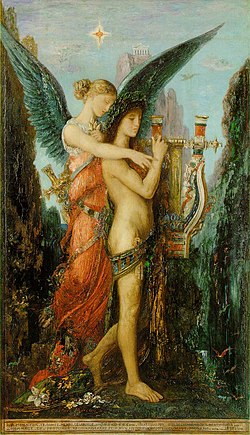 Mythography is the scientific-philological collection and interpretation of myths . The people involved in this activity are known as mythographers .

In the ancient sciences , the word mythograph refers to those ancient writers who like Lysimachos , Dionysios Skytobrachion , Asklepiades and the like. a., since the Alexandrian period (their heyday was in the 3rd and 2nd centuries BC), the various sagas and poems of earlier times edited and compiled in prose .

In the collections of the meager remains of this literature it is also customary to understand by this name those writers who are not concerned both with the narration of myths and with the interpretation of them. The main surviving writings of the latter genus are the work of Cornutus On the Essence of the Gods and the Homeric Allegories of Herakleitos , which have a predominantly philosophical tendency and represent the main direction of the allegorical explanation of myths, the physical, which the essence of the gods as bearers of the ancient sagas traces back to the forces of nature.

The second direction in the explanation of myths, the historical or pragmatic, is represented not only by the relevant books by Diodorus, but also by the poorly preserved Libri de incredibilibus of Palaiphatos and that of Herakleitos.

The most important remnants of the writings of actual Greek mythographers are the libraries of Apollodorus , the narrations of Konon only preserved in the extract from Photios I , the narrationes amatoriae of Parthenios , the transformation of Antoninus Liberalis , the cadastral systems attached to Eratosthenes .

The collections of Roman Mythographi include the Fabulae of Hyginus , the Mythologiae of Fulgentius , the Narrationes fabularum Ovidiarum (from Ovid , which were earlier incorrectly attributed to Lutatius Placidus ), the book De deorum imaginibus and others , which was only written in the Middle Ages by an Albericus . a. 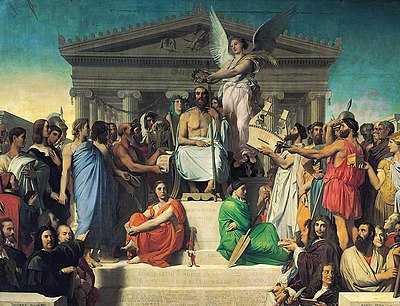 The Apotheosis of Homer by Dominique Ingres (1827)

Publius Ovidius Naso (after a painting by Anton von Werner )