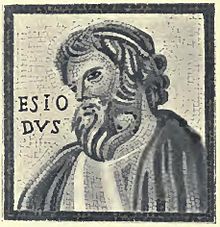 Hesiod ( ancient Greek Ἡσίοδος Hēsíodos ; * before 700 BC, probably in Askra in Boeotia ) was a Greek poet who lived as a farmer and cattle farmer. Hesiod's works are, in addition to the Iliad and Odyssey of Homer , the main sources of our present knowledge about Greek mythology and mythography and the everyday life of his time. He is considered the founder of the didactic epic , the didactic poem, which, after his homeland Askra, was later referred to by the Romans, especially by Virgil , as Ascraeum carmen .

Some information about Hesiod's life may be found in his epics. In his works Theogony and Works and Days (verses 633–640) he supposedly added biographical information in three places. However, some researchers assume that these are also literary fictions.

Hesiod was - assuming the authenticity of the relevant text passages - born in Askra in a small castle in Boeotia . His father, whose name is not known, came from Kyme , which was on the coast of Asia Minor in Ionia . According to tradition, he is assigned to the nobles, but this can also be traced back to a wrong translation of a phrase in Erga 298 that refers to Hesiod's brother: Persē, dīon genos ( ancient Greek Πέρση, δῖον γένος ) was called “Perses, child of Noblemen ”translates instead of, as it should be called,“ Perses, the well-born child ”. It is also said that Hesiod's father owned a small trading company that had relationships with other Greek cities - as was the case at the time, by coastal shipping. However, the business was unsuccessful and failed. He then crossed the Aegean and settled in Askra, where he acquired a small piece of land at the foot of the Helikon . There he married Pykimede, with whom he had two sons: Hesiod and Perses.

Askra was a poor place. Hesiod described it as "an enchanted castle". His life was marked by “hard winters”, “a barren existence that never became pleasant”. 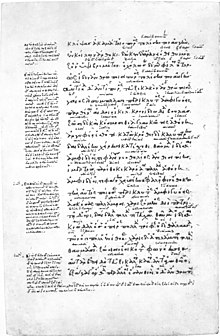 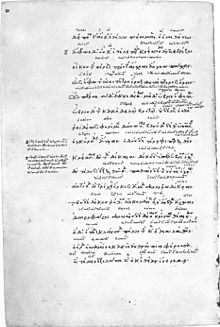 Hesiod's main works are the didactic poem Works and Days as well as the theogony , also the so-called Eoien , a poem also known as the catalog of women ( γυναικῶν κατάλογος gynaikōn katalogos ), only preserved in fragments. He is also credited with the shield of Heracles , an epyllion in 460 verses.

His epic Theogony , in which he describes the creation of the world and the gods in over a thousand hexameters , is largely the basis of today's knowledge of Greek mythology . In his didactic poem Works and Days (Erga kai hemerai), which was written as a guide for farm work, he glorified work as the main task of people and thus conceived an early work ethic . With this he opposes the Homeric ethics of nobility and emphasizes the self-acquired over the innate. Works and Days also contains the myth of Pandora's box . In addition, a sequence of world ages is described there. A golden age is followed by a silver and a bronze (bronze) age and then the so-called “age of heroes”, in which, among other things, Odysseus and Achilles lived and the Trojan War took place. At the end of this chronology stands the Iron Age, Hesiod's own, which is marked by a general darkening and brutalizing of morals. In view of arbitrariness and tyranny, Hesiod calls for an honest and moral way of life.

From the geographical information in the theogony , the world as it was represented to the Greeks at the time can be outlined. This mainly includes areas in the Eastern Mediterranean and Asia Minor. The western Mediterranean was only vaguely known to Hesiod. Also mentioned are the Black Sea ( Pontos ), the Danube ( Istros ) and the Alps, which are known as the Rhyphaen Mountains. The part of Europe north of the Alps was unknown to Hesiod.

Pausanias reports on other works - all epic poems in dactylic hexameters - that were ascribed to Hesiod, including a poem about the seer Melampus . Fragments of this poem, now known as Melampody, have survived . The Suda , a Byzantine encyclopedia, provides another list. These seals together with the certainly authentic works form the “Corpus Hesiodeum”.