This article covers the Periegete Pausanias. For other namesake see Pausanias (name) .

Pausanias ( ancient Greek Παυσανίας , to distinguish it from other bearers of the name sometimes called Pausanias Periegetes “the Perieget ”; * around 115 in Asia Minor ; † around 180) was a Greek travel writer and geographer. Pausanias is sometimes counted among the historians, although his work does not follow the genre rules of ancient historiography .

What little is known about the life of Pausanias emerges from his work. Both the year of birth and the year of death are unknown, but his work shows that it was created at the time of the emperors Antoninus Pius (138 to 161) and Marc Aurel (161 to 180). From his statement that he did not see Antinous alive, it can be concluded that Pausanias was born between 111 and 115 in Asia Minor, probably in the area of ​​the Sipylos Mountains , an area he calls "his own". His very good and extensive education ( paideia ) can therefore most likely have been obtained in Magnesia on Sipylos . In addition, he probably came from a wealthy family, as he could afford his extensive travel activities at a young age. Judging by his work, especially in the places where he refers to his eyewitnesses, he seems to have traveled not only all over Greece and West Asia Minor , but also Galatia and southern Asia Minor. He also came to the Euphrates , through Syria and Palestine . In Egypt he came to Thebes in the south . He also knew Rome , Campania and southern Italy firsthand. The time and order of the individual trips are just as unknown as the place where he probably died shortly after 175. 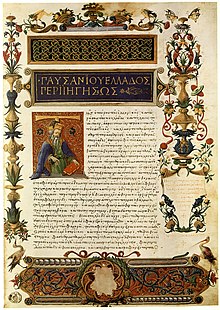 The beginning of Pausanias' description of Greece in the manuscript Florence, Biblioteca Medicea Laurenziana , Plut prepared by Johannes Rhosos in 1485 . 56.11, fol. 1r

Pausanias' Ἑλλάδος Περιήγησις ( Helládos Periēgēsis , "Description of Greece") is preserved in ten books. However, there is evidence of another book. The first book was apparently written around 160, the tenth book around 175 - whether there was a final editing of all ten books and whether the tenth was the youngest is disputed. In Book I, Pausanias covers Athens , Attica and the Megara area ; Book II is dedicated to the area of Corinth and Argolis and the island of Aegina ; Book III describes Laconia ; Book IV Messenia ; Book V and Book VI are dedicated to Elis and a detailed description of Olympias ; Book VII deals with Achaia ; Book VIII Arcadia ; Book IX Boeotia ; Book X deals with Phocis , including Delphi and partly Lokris .

Obviously, Pausanias was primarily interested in educated Roman readers. However, Pausanias did not initially reach a large audience in ancient times . It was not until the end of late antiquity , in early Justinian times, around 530, that Stephanos of Byzantium quoted him , who was interested in the Greek cities described by Pausanias. The oldest surviving manuscript of the work dates from the 15th century.

Pausanias' presentation is based both on his own views and observations on site (autopsy) and on the studies of numerous older ancient authors. In many cases he notes local traditions or quotes local historians who are otherwise lost. With his writings, Pausanias made a significant contribution to our image of ancient Greece.

He not only describes the landscape very precisely, sometimes even characterizing the nature of the soil and providing very precise directions, but also all types of structures, from temples to city walls and cemeteries. He is also interested in rituals and cults in the cities he has traveled to. He presents all of this as vividly as possible for his readers, but not always completely correctly or even completely.

In his time, as in the centuries that followed, Pausanias was by no means the recognized name it is today. He was not one of the celebrated writers of his time. It was only in modern times that it gained greater fame in the wake of the growing enthusiasm for antiquity, but as late as the 19th century, the classical philologist Ulrich von Wilamowitz-Moellendorff - who, according to legend, should have had bad experiences while trying to use Pausanias as a travel guide on site to use - the credibility of Pausanias on. He assumed that Pausanias had not seen anything himself, but only quoted what has been handed down from older sources and made many mistakes. Today, however, despite some errors, there is no longer any doubt about the authenticity of most of the descriptions of Pausanias. Classical archeology in particular has essentially determined the predominant accuracy of the descriptions based on the relevant excavations and often refers to his work.

Since much of what Pausanias has described in detail has since been destroyed, buried or forgotten, his work is still an important aid for archeology . With the help of his representation, interesting remains were and are not infrequently rediscovered; at the same time, however, some clear errors of the ancient author have been uncovered, which suggest a certain degree of caution when evaluating his work. Pausanias' description is also helpful to get an overall picture of certain cities or temples based on some ruins that have been found and excavated.

His ten books are also of inestimable value for art history , as he put a lot of effort into describing statues and pictures as accurately as possible. We know from his descriptions that Hermes von Olympia des Praxiteles , found in the Hera temple there in 1877 , was still at its original place of installation.

His work is also significant with regard to ancient authors who would otherwise be lost, as he often quotes his literary predecessors and contemporaries. Likewise, his presentation is important for the areas of social science , as he does not leave the lifestyle of the Greeks at that time unmentioned. Thanks to him, we know that the game park still existed in the 2nd century, which Xenophon had established on his Skillous estate near Olympia after he had got to know the Persian royal gardens on the procession of ten thousand .

His work also provides important reference points for religious studies and mythology research , as Pausanias very often reproduces local myths and legends of the gods. Finally, his description also offers some historical notes, as he often included small digressions on local history in his presentation.