Thebes ( ancient Egyptian in the New Kingdom Waset, otherwise also: Niut or Niut-reset ) was the Nile lying ancient Egyptian city in Upper Egypt , which Homer in his Iliad (ninth song, 383 V.) the hunderttorige Thebes called; Not to be confused is the Greek Thebes in Boeotia , named seven-gate by Homer in the Odyssey (Canto 11, v. 263) .

At the end of the 19th century there was only an extensive field of ruins on both sides of the Nile. The temple and city area lay in an alluvial plain , which continued to grow due to repeated artificial embankments. As a protective measure against the flood of the Nile , dykes were built to protect the temples in particular. Today one of the tourist centers of Egypt , the city of Luxor, is located in a part of Thebes-East . Thebes has been inscribed on the UNESCO World Heritage List since 1979 .

The name Θῆβαι Thēbai (Thebes) is passed down from the Greeks of the Ptolemaic period , but also the designation Διὸς Πόλις Μεγάλη Diòs Pólis Megálē 'great city of Zeus ', from which the names Thebae or Diospolis Magna were derived during the time of the Roman Empire . The Thebes region encompassed both sides of the Nile at least since the New Kingdom; it is divided into Thebes-East and Thebes-West. In addition, the northern " Lower Egyptian Thebes" existed as a further place in Tell el-Balamun .

The Thebes area has been inhabited by humans since at least the Middle Paleolithic . The founding of Thebes is not known. Two large mastabas , which were excavated in el-Tarif (West Thebes), date to the 4th dynasty . Some decorated rock tombs date to the end of the Old Kingdom , which at least prove that Thebes was already settled at this time and was probably a, if perhaps rather small, town.

The city only entered history with the 11th dynasty (2119 BC). During this time Thebes developed into the capital of the country . The graves of the early dynasty can be found in el-Tarif and those of the late 11th dynasty in Deir el-Bahari . Although the capital was moved to the north at the beginning of the 12th dynasty , Thebes remained an important city. Sesostris I expanded the temple of Amun there . Excavations have shown that the city of the Middle Kingdom was laid out according to plan in a checkerboard pattern and probably already covered around two square kilometers at that time. 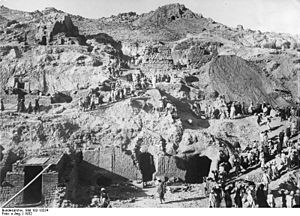 In the 13th dynasty the city gained further importance. The farm seems to have resided here more and more often. There are numerous endowments of statues at the Amun temple. Thebes became capital again in the second interim period after the north of the country was ruled by the Hyksos . After the expulsion of the Hyksos and the restoration of the temples that had been destroyed under them, i.e. under the 18th dynasty , the extraordinary buildings were built, which, embellished, enlarged and increased over the course of the following eleven centuries, made the city a wonder of the Old World .

Thebes remained an important royal residence, main place of worship and also the main necropolis of the country in the early 18th dynasty, but the actual administrative center of Egypt seems to have moved back north to Memphis early on . Especially after Akhenaten's reign , the city was only the main place of worship in the country and a royal necropolis. Under Tutankhamun , the court finally moved to Memphis. However, during the Third Intermediate Period , the aspiring Theban priesthood, whose national importance was by no means weakened, was able to help the city achieve unprecedented wealth and splendor.

652 BC The Assyrians under Ashurbanipal devastated the city ​​and its sanctuaries. Thebes is also said to have suffered greatly under the Persians and was never able to find its way back to its old meaning. The relocation of the residence under the last dynasties to the cities of the Nile Delta and the prosperity of Alexandria under the Ptolemies deprived her of vitality. 84 BC BC brought the indignation against Ptolemy IX. the city's downfall. Embittered by their three years of resistance, the king destroyed them after his victory over the defenders by burning Thebes, so that Strabo later found only a few poor villages here grouped around the four main temples. The city seems to have recovered quickly and remained of some importance in Roman times, although it lost its importance as an administrative center. It was now called "Diopspolis magna". A unit of Roman soldiers was stationed near the Luxor Temple. At the end of the third century it even became the capital of the newly established province of Thebais Superior for a while . The Luxor temple was converted into a legion camp.

West side of the Nile with Colossi of Memnon, Ramesseum and Temple of Hatshepsut.
Behind the part of the mountain range to the right of the center of the picture lies the Valley of the Kings .

In the 20th century, the German Archaeological Institute in Cairo built the German House, a guest house for archaeologists.

Today Thebes often only refers to the area on the western side of the Nile, i.e. Thebes-West . Luxor occasionally includes Karnak and is used synonymously with East Thebes .

Thebes-West (western bank of the Nile)

Necropolis and current settlements on the western bank of the Nile:

Thebes-Ost (eastern bank of the Nile)

Temple complexes and today's settlements on the eastern bank of the Nile: