Mentuhotep II was an ancient Egyptian king ( Pharaoh ) of the 11th Dynasty ( Middle Kingdom ), who lived from around 2061 to 2010 BC. BC first ruled in Upper Egypt and later established the unification of the empire with Lower Egypt . In the royal papyrus of Turin , 51 full years of reign are recorded for him.

Mentuhotep II was the son of Antef III. and a queen yeah .

His main consorts were Tem and Neferu . As concubines apply Henhenet , Kawit , Kemsit , Sadeh and Aschait . His successor Mentuhotep III. was his son from the connection with Tem. It is uncertain whether Mijt is another wife, fiancée or daughter of Mentuhoteps II.

This king managed to unite all of Egypt between his 30th and 39th year . This was preceded by documented battles for This , Assiut and Herakleopolis . He is considered to be the founder of the Middle Kingdom and was the first king to use the complete royal titular with all five names. He changed his Horus name twice, the last one, schema-taui , then also means " unifier of the two countries " (Upper and Lower Egypt).

The ruler launched an aggressive foreign policy. Campaigns are documented for Nubia. A rock inscription of the ruler was even found in Uwainat in the far west (near today's border with Libya ).

In his 46th year of reign there is an entry for the creation of the “ Stele des Meru”.

Two viziers can be assigned to this ruler with certainty. Bebi is only known from one block from the king's mortuary temple and presumably officiated around the middle of the reign. He was followed by Dagi , who is known from his grave and mentions in the mortuary temple .

Chety was the first chancellor ( treasurer ) under the ruler and organized the Sedfest for the king. Meketre was treasurer under King Mentuhotep II / III. His grave ( TT280 ) south of Deir el-Bahari was excavated in 1919/20. It contained 25 wooden models in the Serdab .

The steward was Henenu , who is also documented under the successor. The head of the sealers was Meru, who in turn is known from his grave and an inscription in Nubia, which indicates that he led a Nubian campaign by Mentuhotep II. A certain Antef is documented as a general , who presumably led an Asian campaign. The siege of an Asian fortress is depicted in his grave.

Mentuhotep mainly renovated temples in numerous places in Upper Egypt. He is the first Egyptian ruler to be known of a major temple building project. In Abydos he built a chapel for the dead. It is the first royal chapel in this place.

Mortuary temple of Mentuhotep II from above

In Deir el-Bahari, Mentuhotep II had a mortuary temple built, which was unique at the time. From the valley temple on the edge of the fruit land, it was reached via a 46 m wide and 1 km long brick driveway , which was surrounded by a wall and led to a temple that was partially cut into the mountain basin. In the forecourt there is a ramp that leads to a tunnel (the so-called Bab el-Hosan ). In the chamber at the end of it, the Ka statue Mentuhoteps, wrapped in linen , and an empty wooden coffin were found.

The pillar hall of the mortuary temple was crowned either by a pyramid , a mastaba , an obelisk or an ancient mound. The Egyptologists do not agree on this.

A 150 m long shaft stretched from the rear columned hall into the rock massif behind to the actual burial chamber of the king. Around 600 model figures were discovered in the side chambers of the corridor. The alabaster sarcophagus, the wooden coffin and some grave goods were found, as well as fragments of the king's skull.

A later covered corridor led from the pillared hall to the grave of the main wife Tem, which was found in 1859. Unfortunately, the gifts and scrolls that were discovered there have now been lost. Six statue shrines and the sarcophagi of six queens and princesses of Mentuhotep II (Henhenet, Kemsit, Kawit, Sadeh, Aschait and Mijt) were found on the western rear wall of the colonnade . 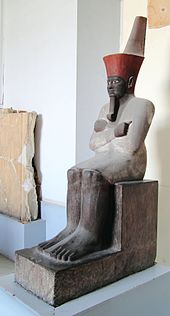 To the grave temple