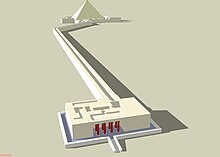 On the way of the pyramid of Niuserre 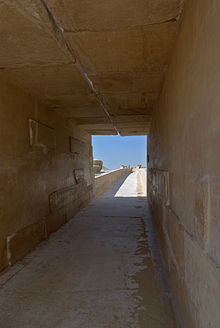 An Aufweg is a connecting path between the valley temple on the edge of the fruit land and the pyramid temple on the desert plateau .

The first access routes were in the east-west oriented pyramid districts of King Sneferu . They consisted of a narrow, covered stone corridor and were dimly lit through slits in the ceiling. Due to their considerable length (181 to 1500 m) they formed a traffic obstacle and were often equipped with underpasses. The walls were given reliefs from the 5th dynasty . At the top, they showed tribute-bringers and secular scenes, and further down, the victory of the royal spoons over the enemy.

In the case of the Sesostris I pyramid , the pathway was equipped with royal statue pillars . These were rather elongated interiors that linked spatially separated but functionally closely related buildings. In the Middle Kingdom , the access road was protected on both sides by flanking brick walls, of which often only these have been preserved and simulated the “open” access roads. It was more about processional streets that were mainly used for amunfestivals . Such improper access was only found at the mortuary temples of Mentuhotep II , Hatshepsut and Thutmose III. in Deir el-Bahari . The latter was planted with a double row of trees at the lower end. In the sixth dynasty Aufwege were for nomarchs -Gräber in Aswan and Tjebu rebuilt.

Lengths of some routes