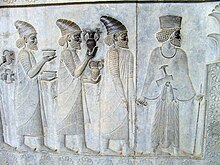 Tribute ( Latin tributum "levy", "tax"; literally "assigned", to tribuere "to assign") historically denotes a levy or tax . The tribute was paid as a sign of submission or loyalty to the vassal . As a rule, these were regular payments in cash or in kind that were not only economically significant but also expressed the balance of power.

Various ancient states demanded tribute ( ancient Greek φόρος ὑποτελείας phóros , German 'carrying' ) from the areas or peoples they had subjugated or threatened. In the case of alliances , the weaker party gave the stronger party the tribute as a token of allegiance and for funding certain projects - usually to fund the military . Tribute was not only paid in the form of money , valuables were also available and people who were held hostage for illegal behavior. The term can also be applied to religious donations, for temple service or other shrines .

In ancient Rome, the term originally referred to a tax paid by the citizen to the state, which the state could but did not have to repay: The Roman Republic demanded tribute from its citizens in the form of the equivalent of property tax with the aim of waging war . Since 167 BC However, Roman citizens were then exempt from the tributum , even if an inheritance tax was reintroduced under Emperor Augustus .

In late antiquity , tributes played an important role in Roman foreign policy towards Teutons, Huns and Persian Sassanids ; The emperors tried to reinterpret the payments to the barbarians as "aid money" ( subsidies ) in order to counteract the appearance of inferiority.

It also happened that intruders like Vikings or Celts demanded tribute (see: Danegeld ) instead of raiding the place so that it could buy itself free by paying a certain amount of valuables; a regular tribute then resembled a protection payment .

To stop paying tributes was a massive provocation that called the hierarchy between donor and recipient into question. When, for example, King Henry I stopped paying tribute to the Hungarians in the 10th century , this was tantamount to a declaration of war.

Various medieval rulers forced tribute from their vassals or peasants , officially in exchange for protection. From this the medieval tax system developed .

The symbolic meaning of tribute as a sign of respect and submission has been preserved in the phrase "pay tribute to someone ". In today's everyday language, tribute often describes the recognition that is given to a person, an activity or a product (see also tribute album ).

On the original meaning of "dispensing" recalls the Hydrographic the term tributary : A tributary ( Engl. Tributary ) is always tributary compared to the larger river into which it flows .