This article covers the seahorse genus. For further meanings see sea ​​horse or for the colloquial swimming badge of the same name, early swimmer .

The seahorses (scientifically since the 1570s hippocampus , after the mythological sea monster hippocampus ) belong to the fish . They are particularly noticeable because of their appearance, which reminds very little of other fish. Her head is more like that of a horse , her abdomen a worm . Together with the scraps of fish and other species to form the family of Jianzui (Syngnathidae).

The body, usually in a vertical position, is surrounded by ring-shaped bone plates, the edges of which form rings around the body and groins along the body. On the trunk, which is heptagonal in cross section, there are usually 11, occasionally 12 to 13, and on the tail usually 30 or more rings. The places where the rings and longitudinal ridges cross, they are usually raised and form tubercles or spines. The spines can be distinguishing features for individual species, but vary depending on age and sex. In general, young animals are more prickly than adults and females are more prickly than males. The head is directed forwards and downwards, in adults at an angle of less than 90 °. The small mouth is at the tip of a tubular snout, the jaws are edentulous. The neck is well developed and flexible, the belly strongly flattened on the sides. The four-sided tail is suitable for grasping, the males have a brood pouch under the front part of the tail.

Seahorses live in tropical and temperate seas around the world. Most species are found in the temperate seas around South Australia and New Zealand . Your tail serves as a tail wound to anchor it to seaweed and the like. Ä. or to conspecifics. It is interesting that the tail is not moved laterally - as is usually the case with bony fish - but downwards: the trunk muscles are reduced, while the two rear lower carinal muscles are strongly developed. In the case of great danger, seahorses also flee stretched out.

According to Kuiter, the seahorses of the English Channel and the European Atlantic coast belong to the species H. europaeus . At least three species of seahorses live in the Mediterranean : the long-snouted seahorse ( H. guttulatus ) and the short-snouted seahorse ( H. hippocampus ), which are so called because of their head shape, and Hippocampus fuscus , which migrated from the Red Sea to the Mediterranean via the Suez Canal is. The populations of the long-snouted seahorse in the Black Sea may represent a species of their own.

Male of Hippocampus whitei with a full belly pouch

In seahorses, the males become pregnant. The females produce the eggs and use them to lay a yolk supply . During sexual intercourse, they inject them into the male's belly pocket, where they are fertilized by the male's sperm . This injection of the eggs into the male brood pouch is preceded by a common courtship , which consists of a spiral up and down in the seagrass . Males and females meet in the morning hours and swim next to each other in sync with hooked tails. When the female is ready to mate, it begins with the courtship dance that ends with mating. Depending on the species, the females lay between 150 and 2000 eggs in the brood pouch of the males. Inside this pocket, the eggs are surrounded by a tissue that regulates the embryos' breathing by absorbing carbon dioxide from the eggs and releasing oxygen to the eggs. In addition, the fabric creates an environment that corresponds to the salt content in sea water. The development of the young fish takes about ten to twelve days. After this time, the pregnant male withdraws into the seagrass and begins to give birth to the fry .

From now on, the young are left to their own devices and begin to hunt small, planktonic crustaceans . Some species mate again a day later.

Worldwide there are between 35 and 80 seahorse species, depending on the author. The fact that many species have been added in recent years and that some undescribed species are still depicted in the current literature suggests that the number of species is at the upper end of this range. A species described in 2002 is one of the smallest seahorses, the Denise pygmy seahorse ( hippocampus denise ) , which is only 13.5 millimeters in size . The largest species, Hippocampus abdominalis and Hippocampus bleekeri , reach 35 centimeters in length. 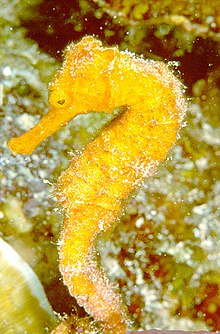 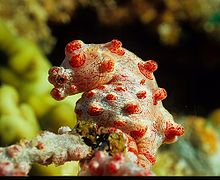 A group of very small seahorses is anatomically different from the other seahorses. Hippocampus bargibanti was the first of these species to be described in 1970, and all others since 2003. The animals are referred to as the “ bargibanti species complex” or “pygmy seahorses” after the first known species . They are only 14 to 22 mm long and their outward appearance is very closely adapted to host corals, moss animals or seaweed . In these seahorses, the gill openings have grown together to form a single exit opening, which is in the center of the back of the head.

In addition to the actual seahorses of the genus Hippocampus , some scientists include three genera of seahorse-like pipefish, which are called dwarf needle horses in German, belong to the subfamily Hippocampinae. They are tiny fish camouflaged by numerous skin outgrowths similar to the shredded fish. They are 4 to 6.5 inches long. Like the actual seahorses, the males have a belly pocket in which the females lay their eggs. Their tail is flexible like that of the seahorse and is used to hold onto plants. 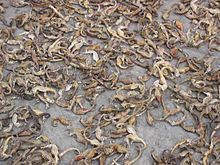 Seahorses are dried as a medicine in Guangzhou, China

Seahorses are an endangered species of animals . They have very few predators as they are difficult to eat food with their bone plates, spines and many bones . The decline in their population is mainly due to the massive destruction of their habitats, the undersea seagrass forests, and the intensive fishing of the waters, which means they often end up in the nets as bycatch . In addition, especially in China and Southeast Asia, there is the belief that pounded seahorses have a healing, but also potency-increasing effect. The populations of the only two seahorse species in Europe have fallen by up to 30 percent in the last 10 years.

In Greek mythology, seahorses were the descendants of the steeds that pulled Poseidon's chariots. The wondrous animals found a place in art and literature . In some cultures they are still said to have special healing powers.

Mythical representations of the seahorse (horse in front, sometimes even with front hooves, often equipped with the fin of a fish or dolphin in the back, possibly a misunderstanding due to descriptions of the animal in the late 15th century ) are found relatively frequently in coats of arms of Coastal towns, particularly in England and the Commonwealth . The mythical creature seahorse is not to be confused with the seahorse.

As a heraldic animal , the seahorse is not very common in heraldry , for example in the local coat of arms of Timmendorfer Strand .