The title of this article is ambiguous. Further meanings are listed under courtship (disambiguation) .

Kestrel hands a mouse to the female at the nest box

The courtship is the advertising prelude copulation of animals. Sometimes the “courtship afterwards” also serves to form pairs. 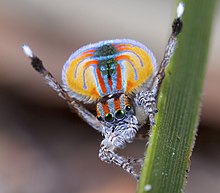 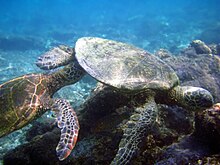 Strauss at the courtship ritual on Farm Neuhof in Namibia (2018)

In the case of permanently pair-forming species, behavioral researchers occasionally use the term courtship in a greatly expanded sense for behaviors that do not immediately precede mating , but are interpreted as elements to promote cohesion or pair formation.

Many animals have a special courtship costume , i.e. a body ornament that is used specifically for courtship. At the same time, this is often a form of warning . Examples: Birds are given special feathers (called wedding dresses), some newts become discolored.

In some species the males court individually in front of the female, while in others the males gather for courtship and are selected for mating by the observing females (examples: black grouse , mugwort ). In some, females and males also court together. Some bird species are observed at the ready for mating females Lahnen .

A more or less pronounced courtship behavior in preparation for mating is found in most vertebrates . With many fish one observes a mutual circling and a special courtship color. With many frog species , a frog concert can be heard through extensive croaking, and toad species also make typical noises. In many mammals , instinctive chains of behavior typical of the species can be observed, which include both the attracting behavior of the female and the imposing behavior of the male. These behavioral rituals serve, on the one hand, to signal to the sexual partner that they are ready to mate, but they also serve to appease the need to overcome the individual distance , since the animals do not come so close physically outside of the mating season. Falling below the normal individual distance could be mistaken for aggression without previous courtship behavior . The willingness to mate is the result of an increased formation of sex hormones . In animals that have a sense of smell, odor signals also play a role in triggering courtship behavior . The hormonal level is changed even further by the courtship behavior, so that afterwards there can be consensual mating. The same also applies to humans . In contrast to other mammals, however, the willingness to mate in humans is not tied to fixed mating times.

The word courtship , known since the 14th century, originally referred to the pairing prelude of black grouse and capercaillie . Later the term was used far beyond the larger, huntable birds, for example also for the sexual behavior of fish.

The etymological derivation of the term courtship has not yet been clearly clarified. In specialist books, however, reference is made to a common origin with the verb bolt (= to pound, knock, to strike), which in the Scandinavian languages ​​can now be found in dialect as baltra ( Norway ) and bulta ( Sweden ) in the sense of rolling around, storming forward .