The inhibition of aggression is a peaceful reaction of an animal or a human to conduct signals or characteristics of another, such as the child pattern . The fact that external characteristics or behavioral signals can inhibit aggression does not mean that these protective mechanisms are always effective. They are part of intraspecific and interspecific communication , serve to maintain the mental and physical integrity of the individual by preventing an attack or ending a fight and thus ultimately also to preserve the species . If an individual has already been attacked and then sends out signals that trigger an inhibition of aggression in the attacker, this is a feedback inhibition in behavior . But there are also signals that prevent an aggressive mood as a precaution.

Both Japanese macaques show anti-aggressive behavior. One lies on his back with his arms outstretched, showing his throat and stomach. The other takes care of his coat, a social body care also called "lausen", which is carried out even when there are no skin parasites. 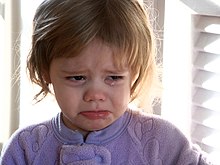 Crying usually has a calming effect

Smile and tilt your head 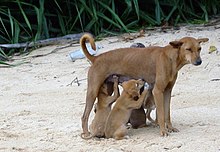 The half-closed eyes of the suckling wild bitch signal to the puppies that they are ready to let them drink from their teats and to endure the milk kick , even though the puppies have teeth and claws . Characteristics and behavior of the puppies as well as the milk flow produce an important inhibition of aggression for the rearing of the offspring. 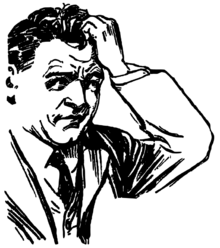 The head scratching is the result of an internal behavioral conflict that acts as a social signal (see also skipping movement ). 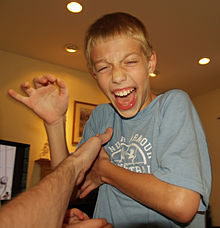 Laugh : appeasement signal of a boy's tickled is

Significance among the interaction partners

The appeasement signals can be acoustic and facial signals, expressive movements or even scent signals . Expressive behavior is often ritualized behavior. Appeasement gestures often originate from the functional circle of child behavior (see also child scheme ), personal hygiene or sexual behavior. Chimpanzees initiate a reconciliation by extending their open hand to the other. Then the opponents hug each other to calm each other down. This is often followed by mutual grooming, a "social cleaning act", which also serves to calm down. In the case of many species of apes and great apes it can be observed that lower-ranking animals take care of the fur of a higher-ranking one and are therefore tolerated in its vicinity. Desmond Morris also describes the presentation of the back of chimpanzees as a ritualized invitation to mate, and in both sexes as an anti-aggression gesture which, however, has nothing to do with willingness to mate, but rather demonstrates devotion to the possible attacker , confirms his position in the hierarchy so appeased. For humans, he describes something comparable to presenting the feminine curves to people who are not desired as sexual partners. In addition to social personal hygiene , some skipping actions , such as cleaning yourself or the apparent pecking of food in birds, have an anti-aggressive effect, which is also used in courtship behavior .

The anti-aggression signals in humans also include gestures of embarrassment , such as blushing , lowering one's gaze, tilting one's head or turning away, but also crying , trembling , smiling , lowering the eyelids and bowing as a gesture of humility , which is part of politeness in Japan . Withdrawal from the territory of an opponent can also inhibit aggression.

Since, according to the maximum value permeability model, different, even contradicting behavioral impulses are offset against one another and the behavior is only determined from the resultant, the effectiveness of anti-aggressive signals is also dependent on further factors.

Occurrence in the behavior of animals and humans

Calming signals play a role in courtship behavior when it comes to falling below the individual distance, in territorial behavior, i.e. also in avoiding or ending comment fights . When it comes to brood care behavior, there are reassurance signals from the young animal or child and also reassurance signals from the parents , with which they maintain the confidence of the young animal or child.

Within a species with the same sound and body language , the anti-aggression signals act according to the maximum permeability model . Between members of two different species with different expression behavior there may be misunderstandings come. For example, the expression of panic fear on a person's face is often associated with opening the mouth , which reveals the teeth . The eyes are also opened wide. The human expression of fear is understood by humans, but from a dog's point of view, this facial expression , showing teeth and staring, is a key stimulus meaning a threatening gesture that can trigger an instinctive reaction. The same applies to laughter , a reflex-like reassurance signal of humans, in which the teeth are shown, which can be misunderstood by a dog as threatening baring teeth. Raising the arms outstretched for help is also an anti-aggression signal that occurs in children, e.g. B. If you are afraid of a dog, the dog perceives it as an invitation to jump up or to fight. A dog phobia can arise from unconsciously self-triggered negative experiences , which intensifies the species-specific human expressive behavior and thus increases the risk of actually being bitten ( self- reinforcing effect ).

No inhibition of aggression in the sense of behavioral biology is the possible renunciation of aggressive behavior in humans through cognitive processes ( insight ), for example after verbal communication with the attacked person, advocacy by a third party or because of a prohibition and criminal liability . The natural inhibition of aggression is not dependent on mental processes, but takes place instinctively , so it belongs to the innate behavioral programs, which is why it also exists in animals. It must not be confused with empathy . In psychology , the term is also used in the sense of shyness , so it has a different meaning here. In humans, in the verbal has interpersonal communication , the active listening an aggression-inhibiting effect, because it can lead to violent communication are used. It serves to reduce misunderstandings, the peaceful resolution of conflicts and the improvement of interpersonal relationships. However, active listening is not one of the anti-aggressive signals and gestures in the sense of behavioral biology.

The anti-aggression signals are not always reliable. "When using long-range weapons , the effects of which the aggressor no longer has to directly experience, they lose their importance" (Hartmut Solbach 2000). With a lack of empathy and with some variants of psychopathy , the perception of the other person's anti-aggressive signals is reduced or misinterpretations through projection occur . In sadism it fulfills the opposite function and the species-specific reaction of inhibition is also lost.