As rank is called in the behavioral biology a social hierarchy , by the particular "rights" and "duties" within a group are regulated and set for a longer period of time. At the top of this hierarchy are always strong and experienced animals, who often enjoy certain privileges, for example right of way at the feeding place and at the watering place , use of preferred sleeping places or privileges in mating behavior . The highest-ranking group member is called an alpha animal (α-animal) by behavioral biologists , the lowest-ranking group member is called an omega-animal (ω-animal). High-ranking individuals are referred to as dominant over lower-ranking individuals .

The evolutionary biologists see the “evolutionary benefit” of developing hierarchies in the course of the tribal history of a species in the fact that hierarchical relationships “contribute to the stabilization of relationships in the group”, “as disputes essentially relate to the establishment or change of a hierarchy (e.g. when young animals are integrated), while the different rights are respected without a fight at other times. "High-ranking animals are usually particularly strong and often have greater chances of reproduction than their lower-ranking counterparts: this is also a long-term advantage for the survival of the group . At the same time, high-ranking individuals often fulfill certain “duties” as lead animals, for example when observing and warding off sources of danger, leading a group to feeding places and watering places and occasionally even settling disputes between lower-ranking animals.

The emergence and change of a hierarchy presuppose that the animals in a group know and recognize each other “personally” - this too ultimately serves the long-term survival of the group.

Origin of the name pecking order

The emergence of hierarchies and the behavior of the animals involved in them was particularly intensively investigated in domestic fowls , which is why the descriptive expression pecking order has established itself as a popular synonym for hierarchy in linguistic usage. The name pecking order has been used since the early days of ethology , at the beginning of the 1920s, by the Norwegian zoologist Thorleif Schjelderup-Ebbe , and initially only referred to higher-ranking chickens who, for example, "chop off" lower-ranking animals with beaked bills when defending their feeding ground and thus consolidate their position.

You can observe in every chicken yard and note exactly in a behavior log for each animal which chicken in a group of hens is "chopping" which other chickens and by which chickens this chicken is chopped itself. As a result, it will often be found that a single chicken chops all the other chickens and is rarely chopped itself, and that in turn a single chicken is chopped by all the others and never or rarely chops after other chickens. This form of social interaction is then interpreted as an expression of a hierarchy in which one of the chickens is the highest ranking chicken (the alpha chicken ) and another is the lowest ranking (the omega chicken ). All other chickens can be placed in this ranking between the two extremes. The beta chicken, for example, subjugates everyone except the alpha chicken. The order of the animals - Alpha (α), Beta (β), Gamma (γ) ... Omega (ω) - follows the order of the letters in the Greek alphabet .

In addition to linear rankings (α → β → γ → ... → ω), there can also be more complex hierarchies if “- as for example with baboons and chimpanzees - two or three males sometimes join together to form a group and then dominate over one animal to which each and every one of them would be inferior. ”There is also evidence of“ triangular relationships ”in the form α → β → γ → α. In some animal communities, males and females have separate hierarchies. “If they form a common hierarchy, the males usually dominate; but there are exceptions. In the dwarf mongoose group , the oldest female is at the top, followed by the oldest male. "

Elizabeth Tibbets from the University of Arizona in the USA and her colleague James Dale from Simon Fraser University in Canada stunned Gaulish field wasps by chilling them in the refrigerator and then used a toothpick to draw a new facial pattern for the calmed wasps. Some wasps were given more blotchy faces, while others had their spots covered. The wasps modified in this way were each placed in a glass container with a different natural wasp of the same weight class. There they fought against each other to clarify the "balance of power".

The evaluation of the staged power struggles - the pattern of the spots influences the social position of the animals - showed that there must be further, unexplored information, such as behavioral patterns or chemical signals. If a wasp mixes up this information, for example if it pretends to be of a different rank, it will be punished severely. Even if the balance of power has long been clarified, a “pretender” continues to suffer from the aggressions of the dominant wasps. 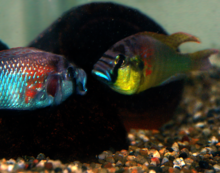 Communication researchers at Stanford University have shown behavior in an African cichlid species that can be interpreted as a preliminary stage of ranking. The male cichlids of Astatotilapia burtoni ("Burtons' mouthbrooders") from Lake Tanganyika defend their small territory against neighboring conspecifics, which is an exhausting affair. The US behavioral researchers noticed that before an attack the fish observe to a certain extent how strong their neighbors are, how successfully a neighbor fends off attacks or even wins. In the laboratory experiment, it was actually possible to prove that the male fish first observe each other and then attack precisely those neighbors who had previously not done too well in various territorial fights. In the experiments, fish of different fighting strength were put together. The resulting fights could be observed by other fish - separated from the fighting by panes of glass. In this way, an artificial ranking was created in the experiment and the fighting behavior of the “observer fish” was significantly predicted if, after observing the fight, they were put together with one of the observed fish.

Female feral domestic cats , which inhabit public parks in large numbers in Rome , drive male cats from the feeding grounds as long as they are not full themselves. However, kittens that are at the lower end of the hierarchy in other situations are allowed to eat before the female cats.

In rhesus monkeys there are hierarchies in which both the males and the females with their young are included. For experiments by José Manuel Rodríguez Delgado , electrodes were implanted in the brain of a low-ranking monkey. a. could stimulate the nerve center for threatening behavior. The animal “doped” in this way by the experimenter on suitable occasions rose inexorably up the ranking until it took the top position - and kept it even when the electrical stimulation was stopped. In this way it could be shown that in primates not only physical strength is responsible for rank in their group, but also psychological dispositions such as “daring”.