The lake is located in the western part of the East African Rift Valley ( Great Rift Valley ) and is bounded by its walls, among other things by the Central African Threshold , which borders on its western side. Lake Tanganyika extends 673 km in north-south direction with an average width of 50 km and has an area of ​​32,893 km². In terms of its area, it is the largest rift lake in Africa and the second largest on the entire continent . With a volume of 18,880 km³, it has the largest freshwater resource in Africa and the second largest in the world after Lake Baikal . The lake, whose water surface is 782 meters above sea level, has an average depth of 570 m, the maximum depth is 1470 m (in the northern part), which also makes it the deepest lake in Africa. This means that the bottom of the second deepest lake on earth is 688 m below sea level, which results in the fourth deepest cryptodepression on earth (after Lake Baikal, the Caspian Sea , and the Dead Sea ). Its enormous depth also means that the deeper layers of the lake are fossilized water .

The catchment area of ​​Lake Tanganyika is 231,000 km². The Ruzizi , which flows into the lake from the north, is its main tributary; further tributaries are: Kalambo and Malagarasi . Via its drain, the Lukuga , it drains into the Congo , to whose river system it belongs.

The International Union for Conservation of Nature IUCN describes this long-term lake as the most biodiverse place in the world. For example, the lake is home to a remarkable variety of fish species (over 300 species), 95% of which are endemic . As in Lake Malawi , cichlids dominate and, as secondary freshwater fish, they can best adapt to the high mineral concentration of the lake. There are also, among other mormyrids , carp fish , tetras , two kinds of herring , barbed catfish , Catfishes , schilbeidae , airbreathing catfish , loach catfish , a kind of electric catfish , four species of giant groupers , two Cyprinodontiformes , spiny , two types of Flösselhechten and a kind of African lungfish in the lake.

Nile crocodiles live on the banks of some regions. The invertebrates in the lake include various types of crabs , annelids , snails , mussels , freshwater jellyfish and sponges . Below a depth of 200 meters, the water of Lake Tanganyika is almost without oxygen ( anaerobic ) and without higher life because of the lack of water circulation . 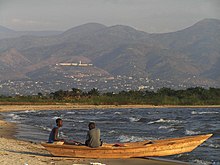 Fishermen on the Burundian shore

The lake has always been an important source of food for the local population. Around 45,000 people make a living from fishing and feed around a million people. Numerous species of cichlid are exported as ornamental fish .

The only large passenger ship on Lake Tanganyika is the Liemba , which provides important services for the population around the lake and for the transport of goods. Since Kigoma in Tanzania, Bujumbura in Burundi and Mpulungu in Zambia are the only ports on the lake, goods and passengers are usually loaded and unloaded on the lake by boat. The Liemba was originally called Goetzen and was built at the Meyer shipyard in Papenburg in Emsland shortly before the First World War . After it had been dismantled there and packed in 5,000 boxes, the steamship was transported from 1913 to 1914 with ocean steamers to Dar es Salaam and further with the former Mittellandbahn (also East African Central Railway , now Tanganyika Railway ) through German East Africa . At the destination, the ship was rebuilt on the shores of the lake under the direction of three German employees from Meyer Werft.

1974–1975 the shipyard Germersheim am Rhein built a cargo ship (the Lukuga , hull number 697) and a tug (the "Zongwe", hull number 698) for operation on the lake, which in Germany were broken down into individual parts (e.g. for the tugboat). in over 100 sections) were prefabricated and assembled on site.

Richard Francis Burton and John Hanning Speke were the first Europeans to encounter Lake Tanganyika on February 13, 1858 , which Burton believed to be the source of the Nile . David Livingstone later moved along its banks. In his notes he mentions the name Liemba as a historical name for the southern part of the lake (probably derived from the Fipa language); this name has been used since 1927 by the formerly German steamer, which has been the main means of transport on the lake since then (see section on shipping ).

From 1995 to 2000 the initial phase of a biodiversity project was financed by the United Nations Office For Project Services ( UNOPS ) and carried out with the participation of all neighboring countries . The aim was to create a sustainable system for the management and conservation of biodiversity. With the involvement of numerous institutes in the neighboring countries, a series of studies was carried out and a strategic action program (SAP) was agreed. The project is to be continued with the support of the Global Environment Facility (GEF).