In biology, plants or animals are referred to as endemics (from ancient Greek ἔνδημος éndēmos , German ` ` indigenous '' ; inaccurately often also endemisms in the plural ) , which, in contrast to cosmopolitans, only occur in a specific, spatially delimited environment. These are endemic to this area .

These can be species , genera or families of living beings that are native to certain islands or groups of islands, mountains, individual valleys or water systems. Example: The Darwin's finches are endemic to the Galapagos Islands because they are not found anywhere else in the world.

There is no definition of the size of the area up to which this term is used. Endemic species for an entire continent , but also higher taxonomic units, can be found for America (“New World” species) or Australia. Occurrences across continents can be found, for example, in the bromeliad family , originally in America, and otherwise only in one region of West Africa.

In botany in particular , the distinction between “paleo-endemics” (also: relicts) and “neo-endeses” (also: origin-endemism) is common.

Paleo-endemics are species with originally presumably wider distribution, which have been displaced into a relic area, usually an island or a mountain range, due to changes in living conditions or new competitors. An example would be the rooting chain fern ( Woodwardia radicans ), which is found today in the laurel forests of the Canary Islands and in narrowly limited areas (mostly on the islands) on the Mediterranean with a similarly precipitation-rich local climate. It is believed that it is the relic area of ​​a species that was more widespread in the Tertiary under warmer and more humid conditions.

Neo-endemics are species that developed from widespread plant taxa under special site conditions only a short time ago (geological history). This is assumed , for example, for the numerous species of the carnation genus Dianthus on mountain peaks in the Mediterranean region or for the numerous tragacanth ( astragalus ) species in demarcated regions of Central Anatolia . Even so-called homeless species appear as a curiosity. These are neophytic neo-endemites that have only developed (mostly through hybridization ) in their new home for a few hundred years from species originally introduced by humans from other parts of the world. This is known, for example, from small species of evening primrose ( Oenothera ) from the biennis species complex .

Species whose distribution area has their absolute focus in a certain region, but from there hardly spreads into neighboring regions, are called sub-endemics. These can either be neo-endemic or “progressive” paleo-endemic, these are those who were able to spread a little secondary from a small relic area. There are more sub-subscribers if the reference region is not delimited biogeographically but politically, since state borders can also cut through very small biogeographical regions. Subsidiaries are important for nature conservation when it comes to the definition of national "types of responsibility", those threatened species for which a particular state bears a special responsibility for their survival because most of their population or range is within its borders is located. In a monograph specifically for Austria, sub-subscribers were defined in such a way that at least 75 percent of the sites (or the grid fields of a distribution map) must be located within the national borders. In addition to sub- endorses , the synonymous term part- endorses is used exclusively in Switzerland .

In addition to the sub-endorsements, there are species in numerous taxonomically insufficiently known or poorly researched groups of organisms whose occurrence has only been proven from a limited area, sometimes only from the type locality , but in which it is assumed that they are actually more widespread. These species are sometimes called pseudo-endemic species . For example, in the faunistically the very poor researched animal group rotifers from Austria 760 known species, 33 of which have so far been found only in Austria itself or immediate neighboring regions (Alpine), of which more than two-thirds only from the type locality. According to experts, only two of these species are actually considered (sub) -endemites.

The smaller the available habitat, the greater the endangerment of the endemic taxa. Even minor changes in the habitat can lead to the extinction of the entire taxon.

The use of the term “endemic” on political borders is only common within the Red List of Threatened Species . 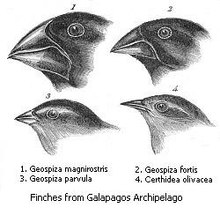 Darwin's finches - subspecies form as an adaptation to habitats and islands

Species that have adapted to the habitat of a particular island are called island endings. An island end is an animal / a plant whose ancestors were driven to an island (mostly further away from the mainland) and have changed due to certain abiotic or biotic environmental factors, so that these animals or plants as a result are only native to this island. Interesting among these is that some species have developed specially adapted subspecies that inhabit different habitats on the island. Most of these subspecies, however, go back to a species that reached the island. Interesting examples of this include the anole lizards on the West Indies , the finches on some Pacific islands ( Galapagos , Hawaii ) or the giant tortoises on the Galapagos Islands. Another peculiarity among island endings is a slow reproductive cycle, through which the number of individuals of the respective species can only increase slowly or not at all. Many endemic birds can only lay one egg per year, which has the same effect as “population regulation” in evolution .

Here are some examples of island endings:

Island gigantism has occurred in some endemics due to the absence of predators such as predators or other threats . Island gigantism can occur when a certain species has arrived on an island where there is little danger for it and where it can find an ideal habitat. As a result, some huge species have emerged on some islands.

Here are some examples:

Insular dwarfism , however, occurs when the smaller specimens are better adapted by their lower nutritional requirements within a species due to lower food supply, or when, with selection better predation smaller specimens opportunities, have the predators to escape.

Here are some examples:

Examples of endemic species in Germany

There are 39 endemics in Switzerland: 33 animal and 6 plant species.