This article covers the biological term predator. For other meanings, see Predator . 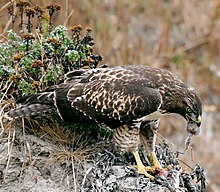 Predator ( Latin praedatio prey, plunder, robbery) denotes in biology , in general form, an organism that uses another for the purpose of eating and usually kills it. The “victim” of a predator is its prey . Synonyms designations for predator are predators, predators , predator and rare Episit. If a predator is at the top of the food chain , it is called a top predator .

The terms predator and predation are not used uniformly within ecology . There are numerous definitions, a different one in almost every textbook. This diversity can be traced back to two basic categories: Either the predation is defined on the basis of the actions (behavior). According to this, a predator is a species that shows corresponding behaviors, for example hunting and killing behavior, and shows corresponding morphological adaptations to this type of food acquisition. Or predation is defined on the basis of the interaction of two species, in which one species (the predator) benefits while the other species suffers disadvantages. Some also use a combination of these categories. A widespread textbook on ecology, for example, initially defines predators purely on the basis of interaction, but then differentiates between four groups according to the mechanisms: real predators, pasturelanders , parasitoids and parasites .

“Typical” or “real” predators or predators fit into both categories. A large number of other organisms are either included or excluded, depending on their use.

The influential American ecologist Eugene P. Odum popularized a scheme according to which all interactions between populations of two species can be schematized according to their effects. According to this scheme, a distinction is made between whether the interaction for the species concerned is positive (shown as a plus sign +), negative (shown as a minus sign -) or neutral (shown as the digit zero 0). The result is an interaction matrix with six (or five, if the neutral non-interaction 0/0 is excluded) possible interactions. According to Odum, there are two interactions of the form +/-, i.e. H. those in which one species benefits while the other suffers disadvantages, predation and parasitism , which are differentiated according to size: the predator is generally larger than its prey, whereas a parasite is smaller. Other ecologists have further simplified the definition so that all interactions of the form +/- are interpreted as predation. What exactly constitutes the positive effects is also understood differently, for example the effect on population size or on population growth (on its productivity), although these effects can differ fundamentally over short and long periods of time. There are even cases to be considered where the predator has negative effects on its prey in the short run but positive effects in the longer run. This would be the case, for example, with a type of prey that uses its habitat beyond its carrying capacity . In practice, cases must also be taken into account in which competition and predation are important between species at the same time, such as omnivores . Even that two species are mutually predators and prey for one another is not uncommon, especially in adults and young animals.

If one follows this broad definition, not only is a parasite or a pathogen , but also a herbivore in general a predator.

Organisms that feed on other organisms are predators according to these definitions if, in addition to the type of interaction, they show certain evolutionary adaptations to this type of diet. In most cases, only those organisms are regarded as predators whose prey is alive (at least at the beginning of the feeding process) but is ultimately killed in the process. This excludes parasites and pathogens, while parasitoids (i.e. parasites that ultimately regularly kill the host at the end of their development) may or may not be included. While some definitions exclude herbivores entirely, others may include those that kill their “prey”. According to this, a seed-eating bird would be a predator, but a pasture usually not (since the grazed plants usually survive the feeding process).

The interaction between predator and prey is mathematically modeled as a predator-prey relationship , often they are described by Lotka-Volterra equations . The interactions affect both parties to a greater or lesser extent, which often leads to mutual adaptation or coevolution in specialized species . Ecologists, but also applied scientists, are often particularly interested in whether a predator controls its prey, i.e. can regulate or limit its population size.

The consumption of dead organic material, such as scavengers (necrophages) and saprophages , is normally excluded from the modeling . This is because a scavenger cannot act on the population size of its prey.

The nematode Strongyloides is one of the (endo) parasitic predators.

Predators exist in all animal classes . The textbook by Michael Begon and colleagues divides predators into the following groups:

Real robbers
Usually prey on different organisms and kill them immediately after the attack. All or part of the prey is eaten.
Examples: carnivorous plants , predators
Pasture goers
are organisms that graze on a large number of other living organisms (plants) in the course of their life and thus usually only absorb parts of these organisms. The attack on these organisms is usually harmful, but rarely fatal.
Examples: sheep , cows
Parasites
also only consume part of the prey. While their attack often negatively affects the prey, it rarely results in their death. Individuals or a few individuals are attacked, whereby there is a close parasite-host relationship that is lacking in real predators or grazers.
Examples: tapeworms , pinworms

The demarcation is not always sharp; For example, herbivores that ingest unicellular algae or seeds sometimes act like real predators.

The terms carnivore , zoophage or predator (Carnivor) correspond to the already defined "predator", but also include carnivorous plants and carnivorous fungi . In addition to the carnivores, there are also omnivorous predators, such as B. Badger and Human . Terms like nest robber indicate that the predator prefers to rob nestlings and eggs.

As seed predators are in the English language (especially in the US) also called animal species seeds ( seeds ) eat ( seed predation ); for this purpose, the term seed predator is now used in German alongside grain eater . Similarly, occasionally pulp predator than Fruchtfleischprädator : (instead of flesh-eaters or soft eater translated).

Differentiation from the consumer

In principle, all predators are also consumers ; they feed on other living beings as heterotrophic organisms. This term is mainly used for qualitative and quantitative studies of the material cycle and the flow of energy in an ecosystem. But not all consumers are also predators, e.g. B. Scavengers feed on dead organisms.