Grasfresser is a redirect to this article. For the Japanese name for sexually less active men see Sōshoku Danshi . 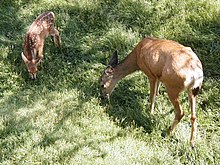 Herbivores are as primary consumers one of the groups into which the ecology , the consumer divides. The next higher trophic level is represented by the carnivores , which the herbivores hunt and eat and are referred to as secondary consumers. In the case of herbivores, irrespective of the systematics , one speaks synonymously mainly of herbivores ( lat. Herba 'herb' and vorare 'devour'), ​​whereby small organisms tend to be called phytophagous ( Greek phyton 'plant' and phagein 'eat').

Herbivores include all animals that mainly feed on plants , especially ruminants . Depending on the definition, species are added that in some cases also feed on fungi , protists or bacteria , i.e. feed on the biomass of lower trophic levels . Exclusively or specialized fungal-eating species ( mycetophage ) or bacteria-eating species (bacteriovore: the term bacteriophage is avoided because of the risk of confusion with bacteriophages , i.e. viruses) belong to the saprophage food chain and are not regarded as herbivores. In the past, however, this distinction was not common because fungi and bacteria were considered part of the plant kingdom for a long time. Species that feed on both animal and plant biomass are known as omnivores (or omnivores).

When looking at herbivores, two levels of observation can be distinguished:

Herbivores exist in a variety of different specializations and adaptations. Depending on the type of diet, they can be divided into different groups:

According to the diet:

After specializing in plant organs:

After specializing in plant species:

In general, species with a narrow specialization in one or a few plant species ( monophage ), species with medium specialization, e.g. A distinction is made between plant families ( oligophage ) and generalists ( polyphage ). Special strategies are e.g. B. grass-eating species (Graminivore).

The categories mentioned are combined to characterize the ecological niche of a species. Examples:

However, some combinations are preferred in nature, others do not occur at all or only as extreme exceptions: filter feeders, pastures and wood eaters are e.g. B. (almost) always polyphagous. Very many species do not differentiate between living and dead biomass or belong to the secondary and tertiary trophic level of the food chain. Aquatic grazers usually graze on biofilms that contain not only algae but also bacteria and fungi without differentiating between them.

Phytophagous species make up a significant proportion of the earth's biodiversity. Most significant for the total number of species are the insects because of their generally high number of species . The role of monophagous and oligophagous specialists on tropical plant species is considered to be particularly important. Depending on how high the proportion of this (very poorly researched) group is estimated, there are dramatically different estimates for the total number of species. In mammals, species-rich orders and superordinates such as the ungulates, the hare-like (Lagomorpha) or the rodents (Rodentia) are exclusively or predominantly herbivores. The (super) order of primates to which humans belong includes a particularly large number of omnivores (such as humans themselves). In addition, there are almost purely phytophagous species such as the gorillas .

Influence of body weight on ecology

In herbivorous mammals, the body weight is a decisive factor for the ecology and thus for the behavior of the animal ( allometry ). A simple application of body weight is, for example, the calculation of the basal metabolic rate with the help of Kleiber's law . Based on this, scientists have found further dependencies of herbivores on their body weight. Examples are:

Regardless of body weight, the digestive system ( ruminant or rectal fermenter ) can also have a major impact on the ecology and behavior of a herbivore. So have z. B. Zebra (rectal fermenter) and Gnu (ruminant), despite their similar body weight, have completely different geographical distribution patterns and selection mechanisms for their feed.

The herbivorous mammals are characterized by wide incisors , with which they cut off the plants, reduced to missing canines , molarized premolars and molars , with which they grind the food. Transversal chewing movements are possible (also because of the missing canine teeth) and necessary for grinding. There are also toothless sections and often a frontally elongated skull.

Because of the rough fibers of grass, grass-eating mammals have specially trained, hypsodontic teeth that are taller than other herbivore teeth and can grow back for life. In this way, it is possible for the grass-eaters to use grass as their main source of nutrition over the long term, despite the fact that their teeth are abraded by their food. While hypsodontia is a common characteristic of grass-eaters, since this type of tooth can also be found in other herbivores, this is not a clear indication.

The hypsodontic teeth contrast with the brachydontic teeth of many leaf eaters , which are rather small and not regrowing. This bit is designed to grind tree leaves and twigs. If a brachydont herbivore consistently consumed rough grass fibers, its teeth would wear out over time.