This article covers the text fields in comics. For the comic magazine see The Speech Bubble .

A speech bubble (more generally: text bubble ) is part of the panel in comics and contains spoken (speech bubble) or imaginary (thought bubble) text or emblems . The lettering is called lettering .

Text bubbles consist of a text field and a reference line to the generating figure. Speech bubbles have a solid line for the figure of the speaker, thought bubbles have broken lines or small circles; Bubbles created by devices (for example, radio , television , walkie-talkie , robots ) often have jagged lines. 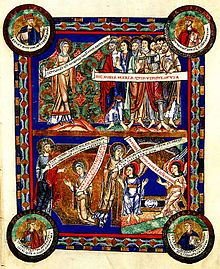 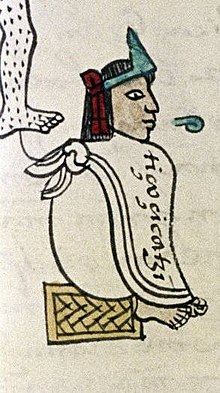 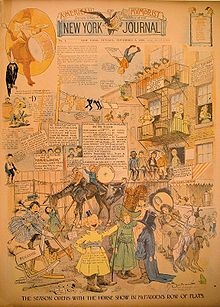 As early as the Middle Ages , what was said was indicated by fluttering ribbons ( banners ) in paintings and prints . The Aztecs also symbolized the act of speaking with a cloud of air, for example in the Codex Mendoza (around 1542). In the early 19th century, numerous satirical graphics were created that referred to current political and social events. Countless of these caricatures appeared as single sheets, others as illustrations in the newspapers of this era. The graphics demonstrate the rapid transition from the banner to the fully formed speech bubble with numerous intermediate forms. Some sheets were designed by such eminent artists as James Gillray and George Cruikshank .

In the other forerunners of modern comics - such as the picture panels of the bank singers of the 17th century or the popular visual novels by Rodolphe Töpffers - the speech bubble was not yet used to convey text.

In 1895 the first “modern” comic “ Yellow Kid ” appeared with speech bubbles, but only for the words of the secondary characters, while the main actor's statements are consistently written on his yellow nightgown. Since then, only a few comics have dispensed with this typical stylistic device, which has contributed quite a bit to the rejection of the mass medium of the comic strip by entire generations of educators .

The design of the text bubbles depends on the content to be displayed and the genre. A uniform style is usually retained within a comic. Some artists prefer a certain text bubble style by which they can be identified. The bubbles are either drawn freehand or constructed geometrically, as an ellipse or rectangle, the latter with right-angled, rounded or concave corners. The reference line can be designed as a narrow, straight or curved triangular flag or drawn as a line with the ruler. Some draftsmen (such as Scott Adams in many of his Dilbert strips) even completely reduce the text bubble - which is then actually no longer a bubble - to the reference line over which the text stands without a border in the room.

Text bubbles are usually outlined in black and contain black text on a white background. However, they can also be highlighted in color, either because the speaker is characterized by the color (red with anger, green with anger, yellow with envy) or because the white area with a predominance of text bubbles reflects the overall color impression of a panel or a comic book. Page would interfere (e.g. with the draftsman Hermann Huppen ) In this case, the bubbles are kept in a shade that corresponds to the color composition of the panel or the entire page. White bubbles can then be used to highlight particularly important areas.

While in the USA, France and Belgium the text was inserted by hand in block letters (hand lettering), machine lettering was preferred in Germany for price reasons, even for translated comics until the 1970s. This severely disturbed the graphic character of a comic. The text did not fill the bubbles optimally and the typeface was always the same, even if different characters and formatting were used in the original when the speaker's mood changed.

In the case of exchanges of speech, several bubbles are attached to one another, the sequence is clarified by overlapping. Speech bubbles can also be dragged over to the next panel or refer to the previous panel (text from the off). In this way, you combine two settings in two different panels into one scene.

Above all, the reference lines, but also the shape and design of the text bubbles can help to identify speakers (different shapes for different speakers, see for example Volume 6 of the Valerian and Veronique series , p. 18). Constrictions in the bladders can also indicate pauses in speech and paragraphs. The shape of a speech bubble can also characterize the type and tone of the text.

Meaning of words in colloquial language

Although speech balloons usually contain complete monologues or dialogues , due to the prejudice that the quality of the texts in many comics is poor, "speech bubble" has become commonplace as an expression for rubbish , meaningless statements, linguistic set pieces, platitudes and the like: "Separate speech bubbles ". Often this is related to some politicians, celebrities, talk shows or other formats of private television.