In the graphic arts of comics and cartoons , the term panel refers to a single image in a sequence . A Comic Strip , for example, a sequence of three or four panels. In contrast, the panels of a comic booklet are usually grouped in lines, with a creatively varied brick-wall-like division of the page (i.e. a rigid grid) being perceived as aesthetically pleasant and easy to read. In contrast to western comics, mangas often have more variable and less rigid panels.

In general, comic artists are free to choose the number and appearance of the panels. However, there are various, mostly commercial areas where there are specifications for the size and number of panels.

For daily comic strips printed in newspapers, there is usually only one line available for the comic. For practical reasons, this means that the number of panels is limited to one to five.

It is customary in American newspapers to have one or even several pages of comics and cartoons printed in the Sunday edition. Until the forties of the twentieth century, a single comic strip - the Sunday strip - often filled an entire page. Then a special panel format was developed for the Sunday trip to give the various newspapers the greatest possible flexibility for printing:

The strip is drawn in three lines of images that fill half a newspaper page in full size.

Newspapers that want to use less space for a single strip omit the top row of panels. This means that the strip only takes up a third of the page.

It is also possible to arrange the panels in just two lines and to reduce the size. The strip now only takes up a quarter of a page.

This special format makes it easier to sell a Sunday strip to different newspapers, as these can give the strip more or less space. Comic artists - such as Bill Watterson - see the strict guidelines as a limitation of the possibilities of artistic expression. Because the first line of newspapers can be omitted, it has to be filled with a gag, for example, that has little or nothing to do with the rest of the strip. The rest of the division of the panels also prevents images such as portrait format panels, which might be more effective for the story being told. 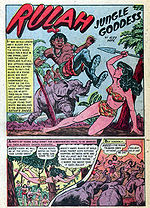 A splash panel, sometimes referred to as a splash page or just splash (dt .: spot; splash), is a panel that extends over an entire page or a very large part of a page and thus has a special effect on the The reader exercises. Professionals still differentiate between an opening splash and an interior splash.

The first page or the top half of the first page is often an opening splash. This can also contain the title of the story and references to the author or authors. Some opening splashs are only intended to arouse curiosity about the story, others already belong to the story and introduce it or show the location in which the story takes place. For example, many volumes by Asterix and Obelix begin with a view of the Gallic village.

There are also opening splashs that are only used on the second, third or fourth page of the story. If a splash panel occurs later in the story, it is called an interior splash. It's always part of the story and often marks a highly dramatic part of the story.