This article explains the graphic with Pointe, Loriot's TV series is explained under Cartoon (TV series) . 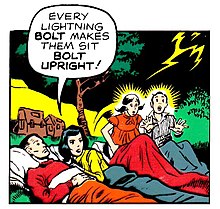 A cartoon is a graphic that  tells a comical and / or satirical story in a picture - usually with a punch line . Originally no words were used for the picture joke. Seriously drawn comments on daily political events with critical intent are called caricatures . However, the transition is fluid. Picture stories over several panels are called comics . Cartoons appear primarily in daily newspapers and magazines .

The term cartoon comes from the French carton = cardboard and originally referred to designs for frescoes and tapestries that were drawn on cardboard .

The cartoon has a long tradition in US and UK newspapers. Renowned magazines such as The New Yorker (founded 1925) adorn each issue with a large number of cartoons and employ their own cartoonists.

The British satirical magazine Punch (founded in 1841) printed the first cartoons in today's sense. Punch also coined the term cartoon in the English language, which was initially meant ironically, but then became the regular term for humorous drawings. Dialogues between the protagonists were printed under the drawing. The Punch cartoons were not only concerned with politics, but also took up - often in a very concise manner - "hot" social issues, comedy situations and everyday conflicts.

This is the difference between the cartoon and the political caricature and abuse of individual persons (whose tradition can be traced back to antiquity ): Even a cartoon can transform every aspect of social life into a concise, witty picture narration; as a comic drawing, it has its own entertainment value and is not only valid as a commentary on current events or as a political criticism . It is thus an art form of its own.

Accompanying texts and dialogues of the protagonists are usually kept very short and pointed in cartoons and are printed above or below the picture or inserted in speech bubbles . Most cartoons are drawn and written by one person, but there are also permanently working teams of draftsmen and copywriters, e.g. B. Katz and Goldt or Greser and Lenz . The content of cartoons is very broad - it ranges from simple word games to the comical treatment of daily politics to drawings whose comedy is based on ironic quotations from pop culture . A special category are the cartoons on scientific topics and facts as designed by the American cartoonist Sidney Harris.

As in comics and animated films, elements of the graphic itself can also become the subject of the narrative and the subject of the comedy in cartoons . Cartoonists often develop an individual graphic style that gives them recognition value and helps them to find a position in the highly competitive market.

The first German-language magazines to print cartoons were the satirical magazines Kladderadatsch (founded 1848), Nebelspalter (founded 1875) and Simplicissimus (founded 1896). The most prominent artists of the Kladderadatsch were Wilhelm Scholz and Gustav Brandt . Thomas Theodor Heine and Olaf Gulbransson worked for the Simplicissimus . Until 1933 there were numerous printed products in Germany that competed for readers with cartoons. During National Socialism , they were banned or changed their political course. Thomas Theodor Heine was one of many graphic artists who emigrated abroad. In rare cases, however, there were still uninfluenced satirical cartoons.

Cartoon: Technical innovations of the Summer Olympics in Berlin with a prognosis for the year 2000, Olympia-Sonderheft, Berliner Illustrirte Zeitung , 1936

In the post-war period, cartoons mainly printed magazines such as Stern , twen and Quick . The dry political caricature was preferred for daily and weekly newspapers. German cartoon art was more determined by plain humor, such as the hedgehog Mecki in the HÖRZU program guide . Exceptions were the sophisticated visual humor by Loriot and the satirical illustrations by Kurt Halbritter . The cartoon was also used in marketing, for example the series of magazines of the Gasolin Tips of the gas station chain Gasolin was illustrated with this graphic form.

"The miraculous increase in money". Cartoon by Waldah

In the German language, the word "cartoon" was made popular as a designation for an (intelligent) picture joke at the end of the 1950s by the Diogenes Verlag ( cartoon calendar from 1956).

The appearance, technique and distribution of this art form in West Germany only changed decisively in the 1960s and 1970s through the draftsmen of the Neue Frankfurter Schule : FW Bernstein , Robert Gernhardt , Chlodwig Poth and FK Waechter shaped the satirical magazine pardon (founded in 1962 ) and especially their nonsense supplement Welt im Spiegel ( WimS ). Even Hans Traxler , of about ten years older than was the young editors of Pardon , the group followed. Because the publisher Hans A. Nikel changed the course of the magazine and WimS was discontinued in 1976, Pardon employees founded the satirical magazine Titanic in 1979 , which became the new forum for cartoonists in West Germany.

In the GDR , cartoons by artists such as Manfred Bofinger , Henry Büttner and Barbara Henniger appeared mainly in Eulenspiegel . However, the cartoons were mostly careful not to be too critical of those in power. From today's perspective, some of these cartoons are to be regarded as pure propaganda.

From 2000, later in the Cologne area with the satirical magazine ZYN! also there a center for numerous new comic artists and cartoonists, from which u. a. well-known artists such as Joscha Sauer , Gernot Gunga , Michael Holtschulte and Christian Bögle emerged .

The Titanic generation before 2000 also paved the way for today's cartoonists, some of whom - such as Uli Stein - also have financial success and exports abroad. Cartoons can now be found in almost all major German daily and weekly newspapers, often in prominent positions, and have thus once again become a decisive factor in sales figures. In contrast to the comic book market, local artists now have a significant share of the German book market for anthologies of cartoon anthologies, where American, French and Belgian artists used to predominate.

Since the advent of the Internet age, so-called flash cartoons have become more and more popular. Nowadays there are already countless clips that are circulating on the "World Wide Web", often with satirical content.