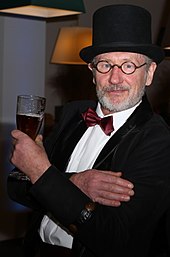 Rötger Feldmann at an event in Hamburg (2016) 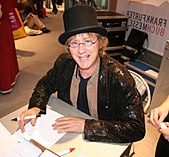 Rötger Werner Friedrich Wilhelm Feldmann alias Brösel (born March 17, 1950 in Lübeck-Travemünde ) is one of the most successful German cartoonists .

Feldmann completed an apprenticeship in lithography at Nordrepro in Flensburg . After completing his apprenticeship, he was drafted into basic military service, where he fell ill with tuberculosis . In 1971 he got a job as a lithographer at the Geisel company in Flensburg. Because of his passion for constantly drawing cartoons and comics - especially those in which he caricatured his superiors - the employment relationship was terminated in 1972. In the 1970s, the unemployed Brösel drew a series of comics about the "Bakuninis", an anarcho family with whom he caricatured the left-wing radical scene of the time.

His first comic drawings around the character Werner appeared in 1978 in the satirical magazine Pardon and in a Kiel city ​​newspaper. The constant arguments with TÜV and the police about his Horex conversions and probably also the contact with the Chopper community provided him with a lot of material for his stories. The comics were taken over by other city newspapers such as the Frankfurter Pflasterstrand and thus achieved national recognition.

Book editions of the comics appeared from 1981, beginning with the volume "Werner - Or what?".

In 1990 the first Werner film was released, Werner - Beinhart! , with around five million visitors. The second Werner film Werner - That must be kettle! In 1996, with 1.1 million viewers, it was the most successful theatrical release ever on the first weekend. The film reached a total of 5.2 million viewers in German-speaking countries. 1999 followed Werner - Volles Rooäää !!! and the fourth part, Werner - puke later! , was published in 2003. In 2011 Werner - Eiskalt! published, which received mostly negative reviews.

His brother Andreas (Andi) Feldmann was one of his closest collaborators for many years in the creation of Werner comics and cartoons. He lives and works as a freelance steel artist in Ulsnis .

The race described in the comic book “Werner - Eiskalt” between a self-made motorcycle with four Horex engines ( Red-Porsche-Killer ) and “Holgis” red 1967 Porsche 911 T was held in 1988 at Hartenholm Airport as part of a three-day festival . Crumb interconnected and lost. The revenge in September 2004 at the Lausitzring was also lost because the transmission of the Red Porsche Killer failed. At this festival, Andi Feldmann also competed with a motorcycle powered by 24 chainsaw motors, the Dolmette , against an Abt Audi AS400 with 450 hp and lost.

Feldmann took overall victory as a driver in the 1500 cc class at the TV Total Stock Car Challenge 2007 for the Pitstop sponsored team of the same name . He also took part several times in the Wok World Cup , initiated by Stefan Raab and based on the same broadcast format .

Feldmann also designed a large-scale advertising campaign for the Jet gas station chain with the characters known from his Werner comics; this runs until today (2018). In addition, he repeatedly created election posters for the SPD for federal elections , which mainly showed Werner.

The race, held in 1988, was reissued from August 30th to September 2nd, 2018 at Hartenholm Airport. This time, Brösel clearly won.

The first Werner volume was published in 1981 by the Semmel-Verlach publishing house, which was founded especially for this purpose . With Jens Nieswand, Feldmann founded the roller coaster publishing house in 1991 , which also took over the publication of Werner Comics until almost its bankruptcy in 2003. At the end of 2002, the Werner Comics were briefly published by Heyne Verlag Munich. In 2003 and 2004 two volumes were published by Egmont Ehapa Verlag , Berlin: The comic for the film Werner - Puking Later! as well as a regular volume entitled “ Free Track with Marzipan ”. After a 14-year break, the new comic "Werner - wat nu !?" was published on June 1, 2018 by the publisher Bröseline, which was founded especially for this purpose. 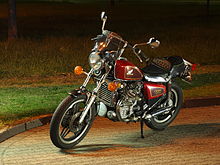 Feldmann's nickname and later stage name Brösel comes from the fact that his early motorcycles "literally crumbled under his bum".

The Honda CX 500 motorcycle became known in the comics as a "slurry pump" due to its water cooling.