Wilhelm Heyne founded the publishing house named after him on February 15, 1934 in Dresden . Reinhold Conrad Muschler (“The Unknown”), Werner Bergengruen (“The Three Falcons”), Ernst Moritz Mungenast (“Christoph Gadar”) and Arthur-Heinz Lehmann (“Rauhbautz also wants to live!”) Were among the first authors American writer Gwen Bristow with "Deep South". In 1940 Franz Schneekluth acquired a minority stake in Wilhelm Heyne Verlag, after he had already become head of the publishing house in 1935. The publishing house on Reichsstrasse was completely destroyed during the air raids on Dresden .

After the end of the war, activities in Munich were resumed in 1948, with Wilhelm Heyne initially only holding 40 percent of the shares in the publishing house.

In 1951, Rolf Heyne joined Wilhelm Heyne Verlag, where he took over management in the early 1960s. Under his aegis, the publisher's paperback program was largely built up. This was expanded in 1966 to include the work of Georges Simenon , which Wilhelm Heyne Verlag had received from Kiepenheuer & Witsch . In addition, the paperbacks from Kindler Verlag were taken over . The 1950s and 60s were also marked by the introduction of various series in addition to the regular program ( general series ), for example Heyne Paperbacks for works of world literature as well as Heyne Science Fiction and Heyne non-fiction . The latter started with " civil courage " from John F. Kennedy , for which the author received the Pulitzer Prize . In 1970 Moewig Verlag , which the Heyne family had bought before World War II , was sold to Heinrich Bauer .

In 1974 Wilhelm Heyne Verlag cooperated with the Bertelsmann publishing group , which wanted to better cover the paperback market . At the same time, Heyne should have easier access to youth, non-fiction and specialist book titles. They also worked with the Hestia Verlag from Bayreuth . In the late 1970s, a package of licenses from Fritz Molden Verlag was also acquired to expand Heyne's program. At this point in time, the Heyne paperback books had a total circulation of over 100 million copies. The Karl May series began in 1976 with “ Winnetou I ” , and other specialized programs such as Heyne Geschichte and Heyne Lyrik were created .

In 1982 Wilhelm Heyne Verlag was finally converted from a sole proprietorship into a GmbH & Co. KG under the leadership of Hans-Joachim Brede and Friedhelm Koch , Rolf Heyne was a limited partner with a contribution of eight million German marks . In the early 1990s, the publishing house bought the majority of Zabert Sandmann and worked with the Haffmans and Beltz-Quadriga publishers in the field of various imprints . By the end of 1993 Heyne Verlag had published a total of 16,000 titles with a circulation of 500 million copies.

At the end of the 1990s, according to media reports, several major publishers expressed interest in taking over Wilhelm Heyne, including Bertelsmann and the Holtzbrinck publishing group . According to media reports, Bertelsmann was given the best opportunities, but in December 2000 Axel Springer finally got on board. Rolf Heyne was supposed to move into the supervisory board of the new Heyne Ullstein publishing group , but died shortly after the acquisition.

In February 2003 the Random House publishing group wanted to take over the Ullstein Heyne List publishers from Axel Springer . The Bundeskartellamt did not approve the acquisition, however, as it was feared that it would have a dominant position in the German-language paperback segment. As a result, it was limited to the Wilhelm Heyne Verlag, while the remaining publishers and the Heyne programs for esoteric and fantasy were passed on to the Swedish Bonnier group. The advice and audio book publishers were part of the transaction, which the Federal Cartel Office finally approved in November of that year. As part of the takeover, the Wilhelm Heyne Verlag limited liability company was merged with the parent company. Since then Heyne Verlag has been part of the Random House publishing group, which is treated as an independent publisher in the book trade. 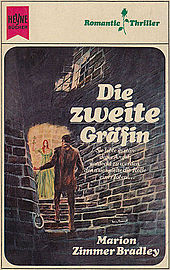 Heyne Verlag used to organize its program in so-called series, of which there were more than 50 copies. The subject of a series was either specific topics (e.g. Heyne film library ), genres ( Heyne science fiction & fantasy ) or events (e.g. Heyne anniversary series since 1993). In 2014, all available works were divided into the categories of suspense , entertainment for women , historical programs , the young program , fantasy & science fiction , hardcore as well as non-fiction and advice . Heyne publishes both hardcover and paperback books , authors include Nicholas Sparks , Robert Harris , Amelie Fried , Sabine Thiesler , John Grisham and Stephen King .

In the mid-1980s, the publisher brought the Rolf Heyne Collection onto the market for the first time in order to expand the hardcover program. According to the company, the purpose of the imprint was the publication of high-quality illustrated books that should meet the publisher's “aesthetic standards”. A central theme of the series was, for example, French cuisine, but also baby photos by Anne Geddes . With the takeover of Wilhelm Heyne Verlag by Axel Springer in 2000, the program was incorporated into Collection Rolf Heyne GmbH & Co. KG , which has since continued as an independent publisher. At the end of 2014, Rolf Heyne's widow Anja discontinued the business activities of Collection Rolf Heyne.