from Wikipedia, the free encyclopedia
This is the spotted version , flagged on July 20, 2020 . There are 2 pending changes that have yet to be viewed. 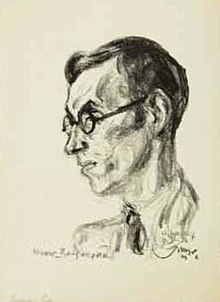 Werner Bergengruen was born as the second son of the German-Baltic doctor Paul Emil Bergengruen (Bergengrün) (1861-1945), of Swedish descent and a member of the aristocratic-patrician upper class, and his wife Helene von Boetticher in Riga. The boy was sent to school by his father because of the Russification policy of the Tsarist Empire in the Baltic States . But he remained connected to his old homeland all his life.

From 1903 to 1908, Bergengruen attended the Katharineum in Lübeck , and from 1908 to 1910 the grammar school Philippinum Marburg . In 1910 he began studying Protestant theology at Philipps University in Marburg and then switched to German and art history . In 1910 he became a member of the Normannia Marburg fraternity . In 1927/28 the federal government became a corps in the Rudolstadt Senior Citizens' Convention . Bergengruen later continued his studies at the Ludwig Maximilians University in Munich without obtaining a regular degree. During the First World War , from 1914 to 1918, he worked as a volunteer and lieutenant or shock troop leader in the German Army in the Baltic States. Under the impression of the murder of family members by Bolshevik troops , he joined the Baltic State Army in 1919 , which fought against the Red Army .

Werner Bergengruen had been working as a journalist since 1920 and went to Berlin in 1922 , where he became head of the Ost-Informations magazine . That year, his first novel Das Gesetz des Atum , which contains autobiographical features, appeared as a preprint in the Frankfurter Zeitung . In later years he was opposed to this work (“rightly out of print, burnt, forgotten”). In 1925 he became editor-in-chief of the Baltic papers .

In 1927 Bergengruen lived as a freelance writer in Munich and Berlin, where he belonged to the circle around the publisher Victor Otto Stomps and his publisher Rabenpresse . In addition to the co-founder of the Rabenpresse Hans Gebser, who became known as a philosopher under the name of Jean Gebser , this group also included Horst Lange and his future wife Oda Schaefer , for a short time Joachim Maass , Walther G. Oschilewski , Hermann Kasack , Robert Seitz , Jens Heimreich , Rolf Bongs , Werner Helwig and Eberhard Meckel . Bergengruen himself contributed to the literary magazine The White Raven , which Stomps published in the Rabenpresse from 1932 to 1934.

Bergengruen's study in the literature museum in Baden-Baden

The National Socialism was Berggruen (as well as his close friend Reinhold Schneider ) versus negative. Although his attitude was national and conservative, he was increasingly oriented towards Christian humanism. Also for family reasons - according to the Nuremberg Laws , his wife was considered a “ half-breed ” because of her Jewish grandparents on his mother's side and her paternal great-grandmother Fanny Hensel - he was aloof, but did not openly oppose National Socialism.

In 1935 his most successful novel The Grand Tyrant and the Court appeared , which had a circulation of over a million copies sold and was understood by critics of the Nazi regime as a hidden reckoning with National Socialism. In view of the period from 1926 onwards, this reading could be too one-sided. The Völkischer Beobachter initially celebrated the work as a “great Führer novel”. The novel was later filmed, dramatized and translated into fifteen languages.

A year later (1936) , Bergengruen and his wife converted to the Catholic faith with the then academic and student chaplain Johannes Pinsk . In 1937 he was excluded from the Reichsschrifttumskammer ( e.g. with reference to the novel Großtyrann ) on the following grounds: "Because you are not suitable to contribute to the development of German culture through literary publications." In a report by the Gaupersonalamt Munich / Main Office for Political Assessments said es: “Neither he nor his children are members of any party division. The German greeting 'Heil Hitler' is neither used by him nor by his family. As far as is known, he does not receive any Nazi press. It should also be noted that B. is strongly denominationally bound. "

Nevertheless, Bergengruen received a “special permanent permit” to publish. As a result, the volume of poetry The Eternal Emperor from 1937 and the novel Am Himmel wie auf Erden 1940 were banned, and broadcasting and lectures were also banned. Regardless of this, the poems critical of the regime in the volume of poetry Der Ewige Kaiser went from hand to hand in copies and / or were only published in publications with smaller editions such as the White Papers . The resistance fighter Hans Scholl , who had met him through Carl Muth , was touched by his works.

Despite Bergengruen's difficulties with the Nazi regime, many of his other works were able to appear, not least because he was one of the most popular authors in Germany. After his house in Munich- Solln was destroyed in 1942, he moved to Achenkirch in Tyrol .

In 1945, after the end of the Second World War, Bergengruen judged the time of National Socialism : “Nobody can say that they knew nothing about the atrocities . (...) Everyone knew what happened in the concentration camps, unless they forcibly closed their ears and face. "

In 1946 Bergengruen moved to Switzerland , then lived in Rome for two years and finally in Baden-Baden from 1958 until his death. In 1952 he wrote his most famous work of the post-war period: The Last Rittmeister (1952), in which he a. a. expressed his doubts and skepticism about developments in the post-war period. For example, he spoke of the “industrial age” or condemned “standardized behavior”. In contrast, he advocated conservative principles such as “sticking to tradition”, which, however, he did not see as a rigid counter-model to the present.

He countered the accusation that he was trying to suppress the criminal past of the Nazi dictatorship in the essay Writing Memories (1961). In it he asks people of all times about their behavior, their failures and their faith and finally surrenders them to the grace of God.

Because of his conception of faith as a “leap over the shadow of one's own existence”, the results of the Second Vatican Council also filled him with suspicion. Because these changes contradicted his non-conformist image of “catholicity” and his basic conviction that “what goes on outside is only a clarifying and coarse picture of the things that happen in the souls of people”.

As the successor to the great authors of the 19th century, Bergengruen wrote novels, stories, poems and translations, which are characterized by polished language and a classic, exciting structure. He was a narrator who packaged his Christian-humanistic worldview in great fables and parables, both in long-drawn-out novels (such as In Heaven as on Earth ) and in small, often anecdotal forms, some of which were held together by framework narratives brilliant. The novelistic narratives make up a focus in Bergengruen's work.

In the German post-war period he was considered an example of an author of the " inner emigration " against the Nazi regime and was one of the best known and most successful authors of the early Federal Republic. Christianity and Western humanism made up Bergengruen's worldview, which pervades his entire work. His novellas deal with the binding of human beings to a higher order and with the work of divine providence, held in a classic narrative form in which an “unheard of incident” is thematized as a timeless action prototype.

His most famous novel work of the three falcons (1936) leans in its structures to Boccaccio Falk amendment in the Decameron (ninth novella of the fifth day) to. In the case of Bergengruen, the falcon owner is impoverished and single, and he separates himself from material and ideological possessions (Boccaccio's protagonist for the hospitable courtesy, Bergengruens for the high respect for animals). With Bergengruen, the falcon does not play the role of a phallic symbol / a lover, as was common in medieval literature - including Boccaccio.

In 1960 Titulus appeared . That is: miscarriage, collections and fragmentary thoughts on the natural history of the German book title, interspersed with occasional errors. Or: Untitled life novel by a library official , according to the review in the time a “lovable, if somewhat thin approach” to the history of the book title.

Bergengruen in the Baltic States 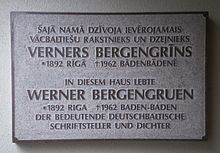 Memorial plaque in the entrance area of ​​the Smilšu iela building (Sandstrasse) 12 in Riga , installed on the initiative of the German-Baltic-Latvian Center Domus Rigensis . - Bergengruen's parents' house was actually at Kalkstraße 12 (today Kalķu iela 22) and was demolished in 1914 or replaced by a new building. Bergengruen died in 1964, not 1962.

In the Baltic Berggruen's work is hardly known today. In Soviet times, reminiscences of the influence of German-Baltic culture and language were undesirable. Finally, selected stories have been translated into Latvian and Estonian and offer the opportunity to rediscover literary evidence of the country's history.