The Katharineum is a grammar school founded in 1531 with an old-language branch in the Hanseatic city of Lübeck in Schleswig-Holstein .

The Katharineum was established in March 1531 as a Latin School or Gelehrtenschule during the Reformation reorganization of church, school and social welfare by the by Johannes Bugenhagen , a friend of Martin Luther, who sent him also because of its low German spoken, written church order established. The first rector was Hermann Bonnus . The school was initially financed in part from the monastery assets, but also from the donation funds from the choir of the Marienkirche . For this, the student choir had to take over the liturgical chant in the main churches.

After a dramatic decline in the late 18th century, after the school had only 27 students in 1798, the rector Friedrich Daniel Behn managed to reform the school. He expanded the curriculum, which had previously only been aimed at the training of scholars, by setting up real classes and introducing more contemporary teaching methods. Another part of the reform was the abolition of the cantorate in 1801 and thus the end of the pupil's obligation to liturgical singing, which had existed since 1531. From the establishment of the Real classes a dichotomy in altsprachliches high school and was in the middle of the 19th century grammar school . In the School Regulations of 1859 states: ". The Katharineum consists of a scholar's school (Gymnasium), a secondary school and a two Community preschool" Until the formation of the Johanneum and Ernestine School Katharineum remained the only higher, quailifizierende to study school in Lübeck . The widely good reputation ensured that many students from the rural areas of Mecklenburg and Schleswig-Holstein did their Abitur here .

The Jung-Lübeck renewal movement that emerged in Lübeck in the mid-1830s consisted exclusively of teachers and graduates from the Katharineum. In the second half of the 19th century, however, the “ Preußung and dehumanization of the new German grammar school” also shaped the Katharineum. Afternoon classes were abolished in 1883, while the duration of the lessons was reduced to 45 minutes. In 1893, the first school newspaper in Germany, Der Frühlingssturm , was published by Thomas Mann at the Katharineum - albeit under the pseudonym Paul Thomas , because the school management and staff did not want it . The second and third editions were later published as double editions, there were no other copies. Only a little later, in 1896, Erich Mühsam was expelled from school because he had passed reports on internal school events to the social democratic newspaper Lübecker Volksbote .

After passing the emergency test, after the souvenir photo in the morning, the school's first volunteer senior primaries went to the First World War .

On its 400th anniversary in 1931, the dual institution had 16 classes with 383 students and a staff of 30 teachers, which since 1918 has been under the directorate of Georg Rosenthal , the father of Annedore Leber and father-in-law of Julius Leber . The anniversary was celebrated in a big way, including a speech by Thomas Mann . Rosenthal was released in mid-March 1933 and replaced by Robert Wolfanger, a staunch National Socialist.

During the Second World War, lessons could only be held with interruptions and relocations. During the air raid on Lübeck on Palm Sunday 1942, the auditorium was destroyed and the south wing facing Hundestrasse and the entire top floor facing Königstrasse were badly damaged. The poorly repaired school building served as a hospital from autumn 1944 until the end of the war .

After the end of the war, the school saw a rapid increase in the number of students, including due to refugees . At Easter 1950, coeducation was introduced at the Katharineum as the first high school in Lübeck . 1955 Realgymnasium and Humanistic Gymnasium were merged. A year later, when Julius Braune became director, 61 teachers taught 40 classes with a total of 1058 students. Until the Trave-Gymnasium was founded in Kücknitz, there was a branch office for Sexta and Quinta in the Travemünder Steenkampschule.

Two short school years 1966/67 enabled the transition from the beginning of the school year from Easter to autumn.

Julius Braune's last years as director saw the end of several traditions. In 1965 the school festival in Israelsdorf took place for the last time , the highlight of which since 1882 was the traditional Primaner pentathlon. In contrast to the school festival, this has been preserved to this day. In 1970 the tradition of festive graduation ceremonies for high school graduates, which had traditionally taken place in the town hall , was interrupted when the majority of the primary school students spoke out against it. But only briefly. Under Braun's successor, Hans Bode, the festive high school graduation celebrations were resumed in the first half of the 1970s: first in the auditorium, then at the “Turnhof” or in St. Katharinen. In 1972, trips to the Nehmten country school home were also given up.

In 1971 the orientation stage was introduced. In 1976 the upper level was replaced by the course system. At the same time, the traditional class designations were abolished. Due to the sharp increase in the number of pupils, rooms at the Geibel School in Glockengießerstraße and the Königstraße 21 building, today's Willy Brandt House in Lübeck, were also used for teaching. In the 1972/73 school year, the number of pupils had increased to 1235, and the staff consisted of 75 teachers. By the end of the 1970s, the number of students rose again to 1,300 and then declined.

In 2006, the 475th anniversary was celebrated under the motto “Preserve the past, live the present, shape the future”.

The neo-Gothic facades of the Katharineum, seen from Königstrasse , before the wings were demolished in 1880

View of the Katharineum around 1911

A large part of the school is located in the historic buildings of the former Franciscan monastery of St. Katharinen . Named after St. Catherine of Alexandria , it was founded in 1225 while St. Francis was still alive .

After minor renovations when the monastery was converted into a school, the complex was redesigned in a neo-Gothic style by the city architect Adolf Schwiening in 1874-1892 . Schwiening's idea was to include the old building with a certain monumental uniformity and clarity, which was achieved in particular by the approximately 65 m long, richly structured street facade to Königstraße with its alternation of red and black glazed bricks as well as by three risalites with stepped gables and one through a pinnacle crowned eaves was reached.

Biology department after the renovation in 2003

After the partial destruction in 1942, however, this wealth of jewelry was not restored. The top floor was rebuilt in 1962 and then again in 2003 for use by biology and physics rooms.

The Wilhelmine auditorium , which was also destroyed , was initially only rebuilt with a makeshift roof. It served temporarily as a wine store and was prepared for school use again in 1952. After a long period of planning, the auditorium was repaired and extended in 2000, creating four new classrooms on the upper floor.

Gym shortly after completion in 1910

In 1910 the school was given a two-story gymnasium in the back of the school yard (Turnhof) in homeland security architecture . In the 1960s a flat-roofed porch with changing rooms and sanitary facilities was added. Due to the inner-city location, the sports field at Burgfeld had to be used for outdoor sports lessons. The swimming lessons took place in the summer months in the outdoor pool on the Falkenwiese; in winter the swimming pool on Schmiedestrasse was available.

Next to the school is the Katharinenkirche , the former church of the Franciscan monastery. The church and grammar school are still connected today via the former cloister . The long walled-up entrance was reopened in May 1961 - primarily to be able to use the church for the Protestant morning prayer introduced in 1959 . This then took place for a long time on Monday morning before the beginning of the first lesson.

The city ​​library was built in other rooms of the monastery in 1620 . Until 1903 the head of the library was a teacher at the Katharineum.

The former Marienstiftsgymnasium in Stettin has a founding history similar to that of the Katharineum . It emerged from the Princely Pedagogy founded in 1543 and was further developed into a neo-humanist grammar school in the 19th century as part of Wilhelm von Humboldt's Prussian educational reform . When the existence of the Marienstiftsgymnasium came to an end in 1945, a sponsorship was established between the former students from Stettin and the Katharineum, which continues to this day.

Since 1997 there has been a school partnership with the Educandato Uccellis in Italy.

The Katharineum is now a municipal high school with an ancient language branch. Latin can be selected as a foreign language as early as the fifth grade, and ancient Greek can be started in the eighth grade . It has around 835 students in 32 classes and eight years, making it the third largest high school in Lübeck in terms of student numbers (as of November 2017).

In the Advent season , since the 1920s, schoolchildren have been performing the nativity play in Low German around the nativity scene under the rood screen in Lübeck's Aegidienkirche .

The Katharineum rowing team (KRR) with alternating between 60 and 100 active members and around 90 in the alumni association is known nationwide. It celebrated its 111th anniversary in 2015, making it the oldest team in Lübeck. The KRR is run by students like an independent rowing club.

In April 2008, former students of the Katharineum founded the Fundraising für das Katharineum eV association , which has set itself the task of organizing funds for a further improvement of the school equipment.

The Katharineum has been using Free Software for several years . The Linux operating system Debian Edu runs on all computers used in class . In this way, the future viability of the school's IT development should be ensured in the long term.

Catharineum in the Lübeck ABC by Carl Julius Milde, 1857

The Katharineum is the model for the school that Hanno attends in Thomas Mann's Buddenbrooks and the institute where Heinrich Mann's professor Unrat teaches.

According to legend, when the monastery was rebuilt in 1353, the philosopher's stone was hidden in the building; the condition of the stone is checked by strangers at certain time intervals.

“One, named Emeke, rebuilt the monastery in three years; it is presumed that he had the philosopher's stone. The stone is still hidden there, and from time to time people come from distant lands, especially Welsche , and see by certain signs whether it is safe. But it is supposed to be in the pillar where the Evangelist Luke paints the picture of the Savior; others say at the point where the Jew sits and supports the vault. A foreman dug at that pillar and cut into the pillar, but the whole church trembled and shook and he had to give it up. "

→ Main article : List of well-known students from the Katharineum in Lübeck 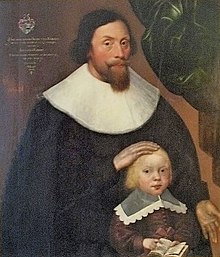 Epitaph of the director JH von Seelen in the Katharinenkirche