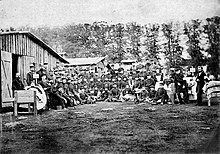 Barracks hospital in the First World War on Lübeck's Burgfelde

Look inside one of the barracks

Hall of the Berlin Art Academy converted into a military hospital, 1914

The word originally goes back to a plague hospital on the island of Santa Maria di Nazaretto (named after Maria of Nazareth ) in the Venice lagoon . The initial change from / n / to / l / is probably due to a confusion with the leper hospice Ospedale di San Lazzaro dei Mendicanti , which in turn is dedicated to St. Lazarus is consecrated. According to the Gospel of John , Lazarus was raised from the dead through Jesus Christ .

According to the Geneva Conventions , attacks on medical facilities such as military hospitals, which are protected by one of the symbols of the convention, are strictly prohibited. Conversely, medical facilities - precisely because of their special status under the Geneva Convention - must not be misused as a “protective shield” for other military units. Ambulance vehicles are therefore not allowed to be used for the transfer of troops and the transport of weapons or ammunition. It is still not permitted to house hospitals in the same building as other, active parts of the armed forces that would be a legitimate target for enemy attacks.

At the beginning of the First World War , the war directorate of the XI. Army Corps had one of the largest hospitals in Germany built in Lübeck . With its initially 30 barracks on the Burgfelde , it became the largest hospital in Germany. The Lübeck senior medical officer R., Eugen Plessing , was entrusted with the organization and management of the barracks hospital. Elsewhere, existing rooms were converted into war hospitals, such as the Berlin Art Academy .

In addition, reserve hospitals were set up to meet the increased need for beds outside the combat area in the event of war.

Modern armed forces generally have their own hospitals, also known as military hospitals. The hospital staff consists mostly of medical soldiers. They are regular members of the military, but in an emergency do not have the status of a combatant due to the Geneva Conventions  - even if they carry a handgun for self-defense, provided they do not use it for an unprovoked attack. They do not belong to the prisoners of war, but can be used for medical care of the prisoners of war . The medical staff is obliged to provide help to every wounded soldier, whether friend or enemy. The recognized emblem of the medical troops is the red cross , the red crescent and (since 2005) the red crystal .

The term field hospital means a mobile medical facility that is located in the rear area of ​​the war front between the main first aid station and the war hospital (the standing hospital in the rear army area).

The field hospital can if necessary - z. B. due to the changing war situation, for example when the front line is approaching - be relocated as quickly as possible. It is the sphere of activity of the medical service of a military armed force, consisting of medical officers (doctors of all branches of service) and medical personnel. The military as a field hospital is able to carry out operations and treatments. Depending on the severity of the wound, it will be decided whether the operation will be carried out on site or in a hospital / field hospital in your home country.

The field hospitals of modern armed forces today have the equipment and capacity of a medium-sized district hospital. In addition to emergency medical and surgical care, intensive medical treatment is also guaranteed. Psychological staff are also available to provide psychological support for the troops. A field hospital has a modular structure and consists of several medical containers in combination with tents, depending on the purpose.

In many armies, including the Bundeswehr and the NVA , separate medical trains were formed that were or are firmly assigned to the military units . Medical trains are also set up in civil disaster control . 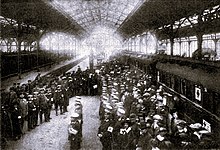 A hospital train is a train with hospital beds, an operating room, a pharmacy , etc. to return the wounded and sick from the area of ​​operation or war.

Hospital trains were ordered by armies or aid organizations and used during and after wars . B. the German hospital train 605 .

In connection with the COVID-19 pandemic , high-speed trains were set up for the transport of coronavirus patients at short notice in both France and Spain . In France, TGV trains were used for transport . On board the converted train there were almost 200 oxygen bottles , medical beds and around 50 health workers, including nurses and anesthetists. Four patients were transported per car. In Spain, three trains of the series 730 , the hybrid version of the as Patito designated umspurbaren high-speed train, rebuilt. 18 patients could be transported per train. The trains bore the words Tren mediacalizado and the symbol of the Red Cross on the outside of each car . In both countries the hospital trains were used to bring patients from overburdened hospitals to other parts of the country where there was still room in the hospitals. On June 14, 2020, Indian authorities announced that 500 railway wagons in New Delhi would be converted into mobile COVID-19 hospitals with up to 8,000 beds.

In addition to the stationary and mobile hospitals on land, there are also hospital ships. Their status is also precisely regulated in the Geneva Convention. All wounded, whether friend or foe, must be treated in the same way on hospital ships. Even the wounded from their own country may not be sent back to the troops after their recovery from board, but must travel to their home country via a neutral country. Hospital ships must be marked with the red cross and are not allowed to carry any weapons, devices or documents for encrypting messages.

Because of these requirements, most nations avoid the use of hospital ships. Instead, they equip warships or auxiliary ships with hospital facilities, but forego protection under international law . In the German Navy there are supply ships with a containerized rescue center (hospital). During the Vietnam War , the FRG converted the former seaside resort ship Helgoland into a hospital ship. It was then stationed with this status under the direction of the " German Red Cross " in the port of the South Vietnamese coastal town of Da Nang from 1969 to 1972. The deployment of the task force provider Berlin in providing tsunami aid off Indonesia in 2005 became known.

In the civil protection Behelfskrankenhäuser are called hospitals, such as those from the Red Cross for earthquake or other disasters in the context of so-called fast-units ( English Emergency Response Units , shortly ERUs to be built). A distinction is made here between so-called basic health stations, which offer basic medical care for the population, and real field hospitals, in which advanced measures such as serious surgical interventions are possible.

The hospital in art, literature and film

In the anti-war novel MASH Richard Hooker processed his experiences in a Mobile Army Surgical Hospital (field hospital) during the Korean War in a satirical way. The novel was made into a film by Robert Altman ( MASH ) and later served as the basis for the television series of the same name ( MASH ) .

Main entrance to the Mahon hospital