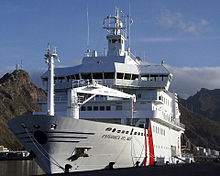 A hospital ship - in the military field is also the name hospital ship usual - is a ship that is provided because of its equipment and the training of its crew for the medical care of needy people. In addition to the sick and injured on other ships and victims of military conflicts at sea, this also affects shipwrecked people . A localized deployment near the shore or in a port is also possible, for example to care for victims of armed conflicts or natural disasters on land. Another important task of these ships, in addition to medical care, is the transport of sick and injured people by sea. Depending on their size, the ships are also called floating hospitals . 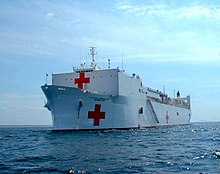 Hospital ship Comfort at anchor on the Baltic coast of Lithuania

Hospital ship Yenisei in the port of Sevastopol

According to their tasks, hospital ships are equipped with operating rooms , an intensive care unit , if necessary other special wards for special injuries and clinical pictures, an X-ray department , a pharmacy , cold rooms for storing corpses and landing areas for helicopters . The specific equipment varies depending on the size of the ship and the main areas of application. In addition, hospital ships have dinghies that can be used for rescue from the open sea or from other ships and often have special lifting and transport devices for this purpose. Many hospital ships were not designed and built from the ground up for their use, but converted merchant ships such as tankers or container ships .

The crew of hospital ships includes not only the people necessary for ship operation , but also doctors from various fields, non-medical rescue specialists , nurses , pharmacists and laboratory specialists .

In terms of their supply capacity, hospital ships are comparable to small to medium-sized hospitals . They can be used independently at sea or in a port for some time and their purpose must be differentiated from sea ​​rescue cruisers and motor lifeboats . Their tasks are limited to the rescue and first aid of people in distress at sea.

Hospital ships in the military sector

During the Crimean War (1853 to 1856), hospital ships were used from the French side, while the Russian side used the former and converted Rostislaw ship of the line for the first time in this war for the treatment of the wounded. One of the first American hospital ships was the Red Rover in the 1860s, which tended to the wounded in the American Civil War . During the Boxer Riots in China (1900 to 1901) almost all Western intervention powers deployed hospital ships , for example the Gera hospital ship , which had 360 beds, was ordered from the German side to Asia. 512 soldiers were looked after on board this ship during the entire intervention.

During the First and Second World Wars , numerous passenger ships and freighters were converted into hospital ships, for example the Aquitania , the Britannic and the Rügen . The German Navy alone deployed around 70 hospital ships and transports for the wounded between 1939 and 1945.

In the course of both world wars, however, the statute of hospital ships was repeatedly disregarded by warring parties, although they were often clearly marked as such. Such ships were attacked and partly sunk. For example, German submarines torpedoed several British hospital ships in the First World War, with many casualties in some cases. One of the worst incidents occurred in June 1918 when the German submarine U 86 torpedoed and sank the British hospital ship Llandovery Castle 116 nautical miles southwest of the Fastnet rock ; 234 people died. During the Second World War, several German hospital ships, such as the Tübingen and Innsbruck in the Mediterranean Sea in 1944, were attacked by Allied aircraft and sunk, despite visible Red Cross markings. These attacks, however, also occurred against the background that the statute of hospital ships, according to which these may not be used for the transport of troops or supplies of a warring party, was violated by the countries involved in the conflict. For example, in 1941 German planes sank the Soviet transporter Armenija , loaded with wounded and medical personnel , off the Crimea , which was (presumably) declared as a hospital ship, but had previously been used for troop transports, which is why the German side assumed it would attack a troop transport. German hospital ships sunk by the Soviets in the Baltic Sea in 1945, such as the Posen , were partly loaded with wounded and partly with evacuated combat troops.

Hospital ships were used in almost all conflicts after the Second World War, for example in the Korean War and the Vietnam War and during the Falklands War . In contrast to the earlier hospital ships, which were often heavily rebuilt over weeks and months, some of these ships were equipped with so-called medical containers, which could be put on or off board quickly if necessary and which enabled them to be ready for use within a few days.

Most of the hospital ships currently in service are under the military medical service of the naval forces of various states. Among the best known and largest are the ships Mercy and Comfort of the United States Navy . The Soviet Union built four large Ob- class hospital ships from the late 1970s . These ships have accommodation for up to 200 wounded and displace a maximum of about 11,300 ts. The lead ship of the class, the Ob , was decommissioned in 1997. The Ob -class Svir took part in the search for the sunken Russian submarine Kursk in August 2000 ; around 90 family members of the perished submarine drivers were looked after on board.

For hospital ships in the military sector, special protective provisions and regulations for their external design apply due to the second Geneva Convention . Its outer shell is to be made completely white and to be provided with large and clearly recognizable red crosses both on the deck and on the side walls . During the First World War, the marking was a green vertical stripe with one or more red crosses on a white body. Hospital ships are fully lit even in times of war.

The German Navy currently has three task force providers on duty for medical care , whose medical supply capacity in the form of a marine rescue center (MERZ) is comparable to that of a small district hospital. Since these supply ships are also used for the logistical support of other ships with operating materials, consumables, provisions and ammunition and are also equipped with their own weapon systems, they are not subject to the protection of the Second Geneva Convention and are not marked as hospital ships.

Civilian hospital ships on behalf of the state

Hospital ships in the service of civil government institutions are rare. The best known are the two Portuguese hospital ships of the former Frota Branca , the first Gil Eannes (1) and the second Gil Eannes (2) as well as the current Esperanza del Mar , which is responsible for the supply of the members of the Spanish fishing fleet on behalf of the Spanish Ministry of Labor . The main area of ​​application is the Atlantic along the West African coast between Morocco or Mauritania and Ghana. In 2006, the Juan de la Cosa, a smaller sister ship, was put into service. 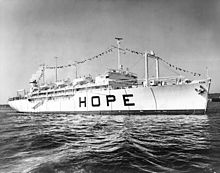 The Christian aid organization Mercy Ships , which has been active since 1978, operates the hospital ship Africa Mercy to provide free care to people who live in poverty, especially in developing countries, and who therefore have little or no access to adequate medical care. The Africa Mercy is currently the world's largest non-governmental hospital ship. The aid organization previously operated the hospital ships Anastasis , Island Mercy and Caribbean Mercy .

The German Red Cross (DRK), with the support of the German government, used the hospital ship Helgoland off the Vietnamese coast during the Vietnam War . From 1966 to 1967 the ship was in Saigon and then in Da Nang until 1972 . The Helgoland was equipped with a surgical department with 100 beds and an internal medicine department with 50 beds, several operating rooms, an X-ray station and a laboratory.

The US aid organization Project HOPE ("Health Opportunities for People Everywhere") chartered the ship Hope from 1960 to 1973 , which had previously been a hospital ship of the US Navy from 1945 to 1958 under the name Consolation . After the ship under its new name had eleven longer missions in Indonesia, South Vietnam, Peru, Ecuador, Guinea, Nicaragua, Colombia, Sri Lanka, Tunisia, Jamaica and Brazil, it was decommissioned in September 1974. A special feature in the selection of the crew was that for every member of the medical staff from the USA, another member from a developing country was on board for training.

The aid organization Cap Anamur / German emergency doctors owned two hospital ships under the name Cap Anamur from 1979 to 1986 and from 2004 to 2005, mainly for the rescue of refugees at sea. In April 2005 the second ship was sold by the committee after almost eight months of seizure by Italian authorities.