This article deals with the pharmacist profession; for the German manager of the same name, see Léo Apotheker .

Pharmacist (from the Greek-Latin apot [h] Ecarius , such as "Kramer" or " grocer ", as the owner of apotheca ) are pharmacists , as professionals for delivering drugs are entitled. They deal in particular with the development , manufacture , testing and dispensing of pharmaceuticals, including advising consumers and other parties involved in the health care system (in Germany in accordance with Section 2 (3 ) BApO ). This requires profound knowledge of galenics , pharmacology , physiology , chemistry , biology , biochemistry , analytics and quality assurance , which are acquired in pharmacy studies . As an academic medical profession , the profession is one of the classic chamber professions . 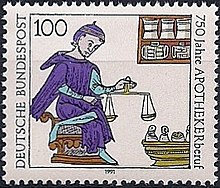 750 years as a pharmacist: German postage stamp from 1991

In Circa instans written in southern Italy , a text published in the 12th century from the school of Salerno , the apothecarii already critically warned against counterfeit medicines , these are exemplified and pharmacist criticism is exercised in relation to the fraudulent weighing of medicinal drugs, the preference for poorer goods and the substitution of cheap ingredients for more valuable ones. In 1231 the Staufer Emperor Frederick II initiated a set of laws compiled by numerous scholars, which was discussed as "Liber Augustalis" (also "Constitutiones regni utriusque Siciliae" - provisions for the Kingdom of the Two Sicilies) at the court day in Melfi (Basilicata) and from September 1231 became valid. In the following years there were numerous addenda, including around 1241 as the " Edict of Salerno " several paragraphs that concerned the medical system. In one of these supplements, the medical profession is differentiated from that of the pharmacist, who was often also active in therapy in the Middle Ages: Doctors may not own a pharmacy or be involved in it; Drug prices were set by law to prevent price gouging; the pharmacist had to take an oath. It can be assumed that pharmacists ( called confectionarii there) already existed in this or in the Mediterranean area, because legal regulation only requires something for which there is also a need for regulation, for example through overlapping occupational profiles. The job description of the apothecarius, who is distinguished from the doctor, is clearly tangible as early as 1100 in the so-called "Liber iste" (and around 1170 in the "Liber mitis" of Guido von Arezzo the Younger, who teaches medicine at the cathedral school of Parma). Even if the date 1241 is considered to be the "founding date" of the pharmacy: The Liber Augustalis was only valid in the Kingdom of Sicily. However, it influenced a number of legal ordinances also north of the Alps and ultimately became the model for pharmacy legislation throughout Europe.

In the German-speaking world, pharmacies and pharmacists in today's sense emerged in the course of the 14th century. In Würzburg, for example, the first “modern” pharmacist, Master Heinrich the Pharmacist, is documented from 1406.

One of the pharmacists important addition to Konrad shock of Aschaffenburg († around 1523) also active as a pharmaceutical specialist author and medical advisor of the German Middle Ages was at the pharmacy of Jacob Schwarzmurer in the house to Kiel active Zurich Pharmakognost Hans Minner (* around 1415/20; † after 1480).

Today, the pharmacist is undergoing extensive training in a multi-year study program , including on the following topics: drugs , drug production, drug testing, drug effects including interactions and side effects, as well as physiology and clinical pharmacy .

The patron saints of the pharmacists are the holy twin brothers Cosmas and Damian , who treated the sick free of charge, and the archangel Raphael .

The operation of a pharmacy in the Federal Republic of Germany has been bound to the license of the operating pharmacist since 1960. The previously existing traditional licensing was declared unconstitutional.

The legal basis for pharmaceutical training in Germany is the Federal Pharmacist Regulations and the Licensing Regulations for Pharmacists. The training begins with studying pharmacy at a university and lasts at least eight semesters (four years). For the future pharmacist, the practical year (PJ) follows , of which at least six months must be completed in a public pharmacy. The rest of the time can also be spent outside (for example in a hospital pharmacy or in the pharmaceutical industry), whereby a pharmacist must be present as an authorized person.

After taking the third state examination, you can apply for a license to practice medicine, which entitles you to practice as a pharmacist. In addition to the exam, a doctor's certificate stating that you are fit to practice the pharmacist profession in terms of health and a police clearance certificate are required. The job title “pharmacist” may only be used after the license has been granted. In the event of serious misconduct (such as criminal offenses ), the state pharmacy supervision can have the license to practice withdrawn. Those affected are heard and can appeal .

After completing your studies or starting your professional life, you have a wide range of opportunities for further training.

As a rule, however, significantly higher non-tariff salaries are negotiated, also due to the current shortage of pharmacists in Germany. Since 2013, the Federal Employment Agency has identified a reported deficit of pharmacists and has declared this to be a “shortage occupation”.

The remuneration of employed pharmacy staff is regulated by the salary tariff. The collective agreements in pharmacy are concluded between ADEXA - Die Apothekengewerkschaft, and the ADA (Employers' Association of German Pharmacies) or the collective bargaining association of pharmacy managers (TGL) North Rhine.

Higher salaries are paid in hospital pharmacies, in the pharmaceutical industry starting salaries of 40,000–50,000 euros / year (without doctorate) or 50,000–65,000 euros / year (with doctorate) are common. In state and federal authorities, employed or civil servant pharmacists are paid either according to the TVÖD and the corresponding civil servant salary. Entry levels are levels E 13 and A 13.

Another job is as an official pharmacist. Depending on the federal state, these are permanent or civil servant pharmacists whose task is to monitor the proper operation of public pharmacies, hospital pharmacies and pharmaceutical companies. In some federal states, this function is also carried out by voluntary pharmacists who are paid as honorary officials according to a fee schedule for their service and usually work as pharmacists in another location of the responsible chamber district , often even in an independent function. Monitoring activities include B. also the control of supermarkets, drugstores and other retail outlets to determine whether goods or items are offered there that are subject to pharmacy obligations and may not be offered there. Compliance with the regulations of the employers' liability insurance association is also the responsibility of the pharmacy supervision . The official pharmacist also takes over the work in the pharmacy area of ​​the trade supervisory authority , not least because the pharmacy operating regulations are part of the trade regulations . The pharmacy , viewed as a company, is a business enterprise that is subject to business tax.

The pharmacist can have a special responsibility in the function of the so-called qualified person (QP) . The legally stipulated suitability for this requires, in addition to a two-year activity in drug testing, the license to practice as a pharmacist (alternatively, a university degree in chemistry , biology , human or veterinary medicine plus proof of extensive knowledge in various basic pharmaceutical subjects is possible). The competent person is ultimately responsible for ensuring that each production batch of a medicinal product has been manufactured and tested in accordance with statutory regulations. It must certify compliance with these regulations for each pharmaceutical batch in a continuous register or a comparable document before it is placed on the market .

The apprenticeship to become a pharmacist takes place through a degree in pharmacy, which is completed with a diploma. You can study in Austria at the universities of Graz , Innsbruck and Vienna . The prerequisite for study is the school leaving examination and, in certain cases, additional exams in biology and / or Latin.

A minimum duration of 9 semesters is required by law. The course is divided into three sections. The first part of the course comprises two semesters, the second five semesters and the third two semesters. Each section ends with a diploma examination.

You can only become self-employed and run a pharmacy in Austria after five years as an employed pharmacist.

According to the Austrian Pharmacy Act, non-Austrian EFTA citizens are not able to set up a new pharmacy. They can only obtain a pharmacy license for a pharmacy that has been in operation for at least three years.

The apprenticeship as a pharmacist in Switzerland is the pharmacy degree.

In Switzerland, specialist pharmacist training is mandatory in order to be able to work independently.

Areas of activity for pharmacists

In marketing , in the area of ​​regulatory affairs and in the function of information officer , the pharmacist opens up additional fields of activity.

With the isolation of the alkaloid morphine as the (main) active ingredient of opium for the first time , Friedrich Wilhelm Sertürner made great progress around 1805 towards more precise pain therapy .

August Oetker (1862–1918) was the inventor of the usable baking powder ("Backin") and founder of the Dr. Oetker . The founders of many German pharmaceutical companies such as Ernst Schering (founder of the predecessor company of Schering AG ), Emanuel Merck (founder of Merck KGaA ), Friedrich Pascoe or Carl Leverkus (founder of the predecessor company of Bayer AG and namesake of the city of Leverkusen ) were pharmacists like John Pemberton , the inventor of the Coca-Cola recipe. The pharmacist Felix Hoffmann played a key role in the development of aspirin for Bayer.

Other well-known pharmacists are the “father of woodchip wallpaper ” Heinrich Wilhelm Hugo Erfurt (1834–1922), the “ cement mixer ” Gustav Ernst Leube (1808–1881), James Parkinson (namesake of Parkinson's disease ), the Briton John Langdon-Down ( 1828–1896) (namesake of Down syndrome ), Nostradamus and the Austrian poet Georg Trakl (1887–1914), who, however, became more and more addicted to the consumption of intoxicants through his work in the pharmacy, which had shaped his life before and then also in drove to death.

Johann Bartholomäus Trommsdorff made particular contributions to the training of pharmacists in the 19th century . Magdalena Meub (later Neff) was the first student to study pharmacy at the TH Karlsruhe and, after graduating in 1905, was the first licensed pharmacist in Germany.