Stele in the area of ​​the birth house

Plaque at the house where Max von Pettenkofer was born

Max Josef Pettenkofer , von Pettenkofer since 1883 (born December 3, 1818 in Lichtenheim near Neuburg an der Donau , †  February 10, 1901 in Munich ), was a Bavarian chemist . He founded the hygiene institute named after him posthumously and is considered to be the first hygienist in Germany.

Pettenkofer was born on the Einödhof Lichtenheim near Lichtenau on the northern edge of the old Bavarian Donaumoos as the fifth of eight children of the farmer Johann Baptist Pettenkofer (1786–1844) and his wife Barbara Pettenkofer (1786–1837). The family conditions were very poor. To attend school he was given to Munich in the care of his uncle Franz Xaver Pettenkofer , who was a royal Bavarian court and personal pharmacist. In 1837 Max Pettenkofer passed the final examination at Munich's old grammar school . He began studying natural science, pharmacy and, from 1841, medicine and chemistry at the Ludwig Maximilians University in Munich . It was also his uncle who started an apprenticeship as a pharmacist from 1839 onwards. He then continued studying in 1841 and graduated there in 1843 with the doctorate to the doctor of medicine, surgery and obstetrics from. At the same time he acquired the license to practice as a pharmacist . Its first publication came out in 1842. In it he described a method for the detection of arsenic and for the separation of arsenic and antimony. He then worked on chemistry at the Julius Maximilians University of Würzburg and then moved to the Hessian Ludwig University in the laboratory of Justus von Liebig .

Since Max Pettenkofer could not find a job after graduating in Giessen, he returned to Munich and initially devoted himself to poetry. The result was the "Chemical Sonnets", which appeared in print in 1890. In 1845 he took a job at the Bavarian Main Mint . Here he dealt with processes for the refined extraction of gold, silver and platinum in the coinage of the Kronentaler . In 1847 he was appointed associate professor for pathological-chemical investigations at the Ludwig Maximilians University in Munich (LMU). His lectures from this time were titled “Dietetic-Physiological Chemistry” and “Public Health Care”. Important inventions from this time were his proposals for an improved method for the production of cement in 1849 . A year earlier he had invented the copper amalgam tooth filling. When his uncle died in 1850, he also took over the management of the court pharmacy. Here “Liebig's meat extract” was successfully produced and sold. In 1852 he was able to persuade Maximilian II Joseph (Bavaria) to call Justus von Liebig to Munich. In the same year Pettenkofer became full professor . In 1862 he took part in a very successful company. It imported meat extract from Uruguay under the name "Liebigs Extract of Meat Companie" with its headquarters in London. In the years 1864/65 he held the office of Rector of the University of Munich. In the same year he became the first German professor for hygiene and the first professor of this subject in Munich ; from 1876 to 1879 the first hygiene institute was built.

Max Pettenkofer presented Ludwig II. (Bavaria) to a private audience in 1865 with his ideas for keeping people healthy and urban hygiene. Ludwig then brought about a ministerial resolution, with which the scientific subject "Hygiene" was appointed on September 16, 1865 as a nominal subject. In the following years he fought for the hygienic renovation of the city of Munich. By 1883 he achieved that an exemplary drinking water supply and an efficient sewage system ( alluvial sewerage ) were set up, which brought significantly improved living conditions in the city. In 1882, King of Bavaria raised Max Pettenkofer to hereditary nobility .

From 1890 to 1899 he was President of the Bavarian Academy of Sciences . End 1893 emeritus , he gave in 1896 to his work at the court pharmacy. Towards the end of his life, however, he was increasingly sidelined because he did not want to recognize Robert Koch's bacteriological findings in cholera research . Although he had already put forward the thesis in 1869 that cholera and typhus are caused by specific microorganisms and poor environmental conditions, he was unable to prove it. When Robert Koch (1843–1910) found the pathogen of cholera in Vibrio cholerae in 1892, Pettenkofer experimented on himself with a Vibrio culture without becoming too seriously ill. He wanted to prove that these bacteria alone are not enough to trigger the disease.

Plagued by increasing pain and severe depression, Max von Pettenkofer shot himself at the age of 82 in his court pharmacist's apartment in the Munich residence. The autopsy revealed chronic meningitis and cerebral sclerosis . 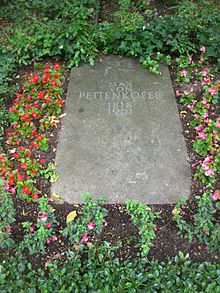 His estate is kept in the Bavarian State Library and is scientifically maintained.

Pettenkofer's most recognized field of work was the science of hygiene, which he himself defined and filled with content. He established hygiene as an independent area of ​​medicine and also recognized the related economic aspects. Therefore, he also approached administration and engineers and developed a health technology that was used, for example, in the renovation of Munich. Munich owes Pettenkofer its sewer system and a central drinking water supply. Towards the end of the 19th century, Munich was considered one of the cleanest cities in Europe.

At the beginning of his professional career, chemistry and physiology were the preferred areas of work. One of the most important achievements of Pettenkofer is the discovery of periodic properties in chemical elements (1850). He thus created an essential basis for the development of the periodic table of the elements (according to Mendeleev's own statements, the work had an influence on him). He went beyond the triad classification of Johann Wolfgang Döbereiner , which was already widespread at that time , and discovered regularities with periods 8 and 16 (in other groups of 5). Due to a lack of support from the Bavarian Academy of Sciences , he was unable to continue his research. At Justus von Liebig he developed the bile acid detection and worked at the Royal Main Mint , where he used improved methods of precious metal smelting and coin production (1848–1849). In 1844, Pettenkofer discovered creatinine , an important metabolic product in muscle tissue . In 1857 he described the production of luminous gas from wood ( wood gas ) for the cities of Basel and Munich (1851) and examined (around 1860 and later at the Hygiene Institute) together with the physiologist Carl Voit (1831–1908) metabolic balances . From this, the two researchers developed the theory of the structure of all living things from three organic compounds that are essential for nutrition: protein , fats and carbohydrates . To this day, ventilators are built according to the "Pettenkofer principle". The meat extract (“ soup cubes ” according to Liebig) developed by Justus von Liebig and Pettenkofer was produced on an industrial scale with South American beef.

With Carl Voit, the pathologist Ludwig Buhl and the botanist Ludwig Radlkofer , he published the journal for biology from 1865 . Pettenkofer accompanied them as editor for 18 years.

Later Pettenkofer devoted himself to epidemiology . In contrast to his earlier work, these investigations have only historical value. Pettenkofer did not believe that the cholera , which also broke out in Munich in 1854, was triggered by a pathogen alone, but rather attributed the main importance to the soil and groundwater quality ( investigations and observations on the spread of cholera , 1855). He held this view for decades, u. a. at scientific "cholera conferences" such as the one in Weimar in 1867, and he stuck to it even after Robert Koch's discovery of the pathogen in 1884. In connection with the famous dispute with Robert Koch over the cause of cholera, Pettenkofer even swallowed a culture of cholera bacteria on October 7, 1892 . He got away with mild diarrhea , possibly because he was still resistant to the pathogen due to his illness in July 1854 . Pettenkofer took the view that the environmental conditions are of much more importance for the development of a disease than the mere presence of pathogens. He and some of his students who repeated the experiment did not get sick or only slightly, which confirmed Pettenkofer. However, he was wrong to the extent that he assumed a certain " contagious element Y" ( miasm ), which - like a chemical reaction - made the development of a disease possible in the first place. The site inspection that is common in epidemiology today and extensive statistical recording and evaluation of the epidemic was introduced by Pettenkofer and his students.

With regard to epidemic hygiene measures, Pettenkofer spoke out against the senseless restriction of public life in the event that the epidemic had already reached nationwide proportions. "Free movement is such a great good that we couldn't do without it, not even at the price that we were spared cholera and many other diseases."

Pettenkofer worked strictly scientifically and experimentally and is considered the founder of experimental hygiene ("conditional hygiene "). His investigations into clothing , heating , ventilation , sewerage and water supply were also experimental. Like his teacher v. Liebig Pettenkofer was a positivist , that is, he only recognized visible facts , for example, obtained in experiments , as a source of knowledge.

Pettenkofer made a mistake that continues to have an effect today, in that many people believe there is a " breathing wall ": he found early air change measurements in a room that after all the joints had supposedly been sealed, the air change rate decreased less than expected. From this he concluded that there was a significant exchange of air through the brick walls. Presumably he never thought of sealing the chimney of a stove in the room. According to Pettenkofer, the exchange of air through the room walls makes a significant contribution to cleaning the room air .

Pettenkofer published a total of more than 20 monographs and 200 original articles in scientific and medical journals. His services as the founder of hygiene, pioneer of environmental medicine , experimental field researcher, chemist and nutritional physiologist were and are recognized worldwide. The medicinal chemistry also owes him useful detection methods for arsenic ( Marsh test ), sugar and urine contents. For his scientific achievements, he was accepted on January 24, 1900 in the Prussian order Pour le Mérite for science and the arts.

The traditional hygienic indoor air value for CO 2 is named after Pettenkofer - the Pettenkofer number. Pettenkofer gave their limit value as 0.10%. 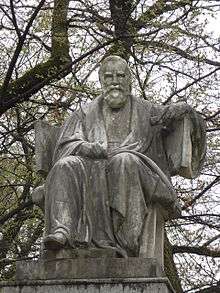