from Wikipedia, the free encyclopedia
This is the spotted version , flagged on August 14, 2020 . There are 2 pending changes that have yet to be viewed.

The Staatliche Wilhelmsgymnasium is a grammar school in Munich and the oldest grammar school in Upper Bavaria . The humanistic grammar school has 541 students (school year 2017/18). According to the 2005 class tests by the Bavarian Ministry of Education and Cultural Affairs , the grammar school is one of the best in Bavaria in terms of learning success, environment and performance.

The Wilhelmsgymnasium is located in the Munich district of Lehel , Thierschstrasse 46, at the corner of Maximilianstrasse , directly at the Maxmonument . The government of Upper Bavaria and the Bavarian State Parliament ( Maximilianeum ) are in the immediate vicinity of the grammar school.

Seal of the Royal Rectorate of the Wilhelms-Gymnasium in Munich

The Wilhelmsgymnasium, founded by Albrecht V in 1559 as the “Paedagogium”, was called the “Old Gymnasium” or “ Old Academy ” from 1824 and was finally named in 1849 after Wilhelm V , Albrecht's successor . Until the Jesuit ban was introduced in 1773, the grammar school was run by the Jesuit order , which is still in contact with the school.

The school was originally located in the Jesuit monastery on Neuhauser Strasse , but then had to move into emergency accommodation in the Alter Hof when the former Jesuit college was needed for the university that was moved from Ingolstadt to Munich . It was not until 1830 that the grammar school was able to move into a converted baroque house at Herzogspitalstrasse 18.

After the rooms at Herzogspitalstrasse 18 had become too small, a new building was necessary. The criticism of the unreasonable conditions of the temporary accommodation and the requirements of a more comprehensive concept of education accelerated the project in the middle of the 19th century. With financial support from King Ludwig II , the new building in the style of the neo-renaissance facade in Lehel in Munich was built according to the plans of Carl von Leimbach from 1875 to 1877.

In the Second World War severely damaged the Wilhelmsgymnasium was 1952-1958 rebuilt changed. Girls have been admitted ( co-education ) since the early 1970s . At the end of the 1980s, the shape and color of the stairwell was reconstructed. The school yard was redesigned and in 2006 a new common room was created for the G8 students.

The Wilhelmsgymnasium was also from 1799 to 1826 and from 1877 to 1918 page education institution of the House of Wittelsbach .

From August 2015 to 2018, the building was gutted as part of a comprehensive renovation and, with the exception of the listed facade and the staircase, completely renovated. In the course of the renovation work, a sports hall below the schoolyard and a new floor above the east wing of the building were created. During the renovation period, lessons at the Wilhelmsgymnasium were relocated to a container castle in the vicinity of the Chinese Tower in the English Garden .

For the building, which was erected between 1875 and 1877, the architect Carl von Leimbach tried to bring function and form to a harmonious unit. “Quiet, space, air, light” seemed to be essential for an educational institution. At the same time, the architect considered the recourse to medieval styles to be inappropriate in order to emphasize the Bavarian-style humanistic educational concept ; therefore he decided against the so-called Maximilian style based on Gothic elements and in favor of the neo -Renaissance style . This break with the architectural concept of Maximilianstrasse became possible because King Ludwig II had different interests than his father King Maximilian II .

The building has the shape of an L , a north-south wing and a west-east wing connected to it in the south. It consists of a basement, ground floor and three floors with around ten classrooms each. In the south wing there is a physics room (ground floor), the library (first floor), the music room (second floor) and the art room (third floor). At the end of the east wing there is the bicycle cellar, two sports halls (ground floor and 2nd floor) and the staff room (with administration wing, directorate, etc., 1st floor).

The 21 mighty statues in a 30-meter-long corridor are copies of figures from the Temple of Zeus in ancient Olympia , which were exhibited in the Deutsches Museum in 1972 , disappeared in a warehouse in 1976 and are now on permanent loan to the Wilhelmsgymnasium.

Since the foundation of the Jesuit College in 1559, the library has been richly equipped for teaching through donations and acquisitions. It still contains numerous works from the early days of the printing press , especially first editions by classical authors. Until secularization , the holdings in many areas of knowledge were continuously supplemented and updated. One focus remained on ancient literature, with numerous works of neo-Latin poetry, especially since two of the main representatives, Jakob Bidermann (1578–1639) and Jakob Balde (1603–1669), were teachers at the school. Also represented is German literature from the Baroque to Romanticism , geography , natural sciences , Bavarian and European history as well as travel literature from three centuries.

The library contains around 11,000 volumes, of which, however, 20 to 30 percent require measures for conservation or restoration. Outsourcing in the last months of the war and improper accommodation even after the end of the war led to various forms of mechanical or chemical damage: moisture, fungus and mite infestation and other unfavorable influences had a sometimes devastating effect on the most valuable volumes. Since March 2000 the grammar school has taken the first steps towards a comprehensive renovation on its own initiative. Thanks to donations from the association and the help of the parents' council, the works are constantly being restored and maintained. For example, through bookkeeping, a number of mechanically damaged books have now been restored or rebound. 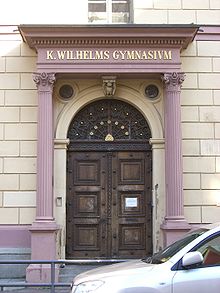 Entrance to the high school

The Wilhelmsgymnasium was founded in 1559 by Duke Albrecht V “not only” as a “common children's school” but as a “pedagogy”. It was given its current name in 1849 after its supposed founder, Duke Wilhelm V. Characterized by the pedagogical sensitivity, the cosmopolitan humanism and the deep religiosity of the Jesuits , who ran the school until the abolition of the order in 1773, strong literary (e.g. center of neo-Latin literature: J. Bidermann , J. Balde ) and educational reform ( FW Thiersch : "Praeceptor Bavariae") impulses. The precious books in the old library still bear witness to this tradition.

Since it was founded in 1559, the Wilhelmsgymnasium has adhered to the humanistic educational tradition through the ages. Today this means: Latin is the first foreign language to be used in the fifth grade, English follows in the sixth, Greek in the eighth and a Romance language (currently Italian) is offered in the tenth. With almost 100 new students, as many students attended the school year 2010/11 and 2011/12 as had not been in the fifth grade for a long time.