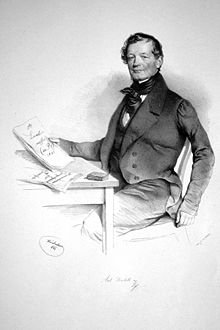 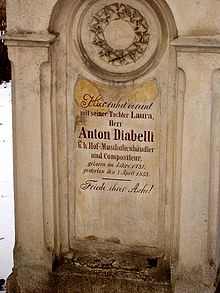 Anton Diabelli (born September 5, 1781 in Mattsee in what is now the state of Salzburg ; † April 8, 1858 in Vienna ) was an Austrian composer , guitarist, pianist and music publisher .

Anton Diabelli's father, Nikolaus Diabelli, born in Aurolzmünster , describes the Latin baptism protocol of September 6, 1781 translated into German as “musician here”; his mother Regina, née Moser, comes from a family of musicians from Helpfau-Uttendorf . The marriage of both took place on October 23, 1780 in the parish church of St. Laurentius. Father Nikolaus was actually called Demon with his last name, but Italianized his original name.

Anton Diabelli received his first lessons in singing, piano and organ from his father. At the age of seven he was accepted as a choirboy in the Michaelbeuern monastery . Here he also enjoyed a thorough musical education, which he continued in 1790 at the instigation of his sponsor Michael Haydn in the Benedictine high school in Salzburg. He recognized Diabelli's talent for composing, encouraged and taught him.

In 1796 he came to the Wilhelmsgymnasium in Munich , a Latin school, because he was to become a priest at the request of his parents. In order to complete his theological studies, he entered the Cistercian monastery Raitenhaslach in 1800 . But Diabelli continued to compose and was further promoted by Michael Haydn.

When the monasteries were secularized in 1803, Diabelli also had to leave Raitenhaslach. He gave up his resolution to become a priest and now devoted himself exclusively to music. His path led him to Vienna to see Joseph Haydn , Michael Haydn's brother. In Vienna he soon made a name for himself as a piano and guitar teacher.

In 1807 the Italian guitar virtuoso Mauro Giuliani came to Vienna, and a lively artistic exchange soon developed, which was significant for Diabelli's work on the guitar. He wrote works for solo guitar, guitar duo and trio, house and chamber music for guitar in connection with fortepiano and other instruments as well as songs for the guitar.

The experience that Diabelli gained from 1806 to 1815 while working for the publishing house Chemische Druckerei - SA Steiner contributed to the fact that in 1815 he decided to apply to the Viennese magistrate to set up his own publishing house exclusively for his own compositions allowed to. But it was not until September 1817 that he implemented the approval granted by founding the Anton Diabelli publishing house , in which he initially only published church music and later also his own arrangements of well-known works. In 1818 he met the publisher Peter Cappi , and from then on they ran the music trade and publishing house Cappi & Diabelli together . Ludwig van Beethoven's 33 Changes to a Waltz, Op. 120 , which appeared in 1823, are considered the most important work published by Diabelli during this period . In May 1824 Diabelli received the approval to continue this publishing house after Cappi's departure as an "art and music store". Anton Spina, who had acquired half of the business inventory when Cappi & Diabelli Cappis was dissolved, became a co-partner . The articles of association of the now Diabelli & Comp. said company was completed on June 1, 1824. The two shareholders shared the tasks. Diabelli was responsible for artistic matters, Spina for commercial matters. One of the first publishing objects was two volumes of Variations on Diabelli's Waltz in C major under the title Vaterländischer Künstlerverein , with Beethoven's op.120 being the first volume and the second volume combining 50 individual variations by composers born or living in Austria. In the course of 1851, Anton Spina's son, Carl Anton Spina, who had joined the company in 1849, took over the business. This was transferred to Diabelli's previous title of court music dealer, and Diabelli then called himself "former court music dealer". The atherosclerosis sufferer withdrew entirely from publishing. At his own instigation he was “placed under Curatel” and Leopold von Sonnleithner was assigned to him as trustee. From January 1, 1852, his previous company was now called Carl A. Spina . Diabelli was a major publisher of Franz Schubert's works . But Diabelli's artistic powers did not decrease afterwards. He had his new compositions published by Carl A. Spina . The last recordable work is dated February 25, 1857, and on October 8, 1857, Diabelli sent a letter with corrections to Spina.

On April 8, 1858 Anton Diabelli passed away - as noted in the death record - as a result of "cerebral palsy". His grave is in the Sankt Marxer Friedhof in Vienna. In 1894 Diabelligasse in Vienna- Hietzing was named after him.

Diabelli's well over 200 compositions encompass all genres of music such as two- and four-hand piano pieces, teaching and study material for the piano and for the guitar, orchestral works , chamber music works , operettas , singspiele, cantatas , masses , offers , graduals. Because of this variety and the large number of opuses, Diabelli can be regarded as a composer of the first order among the Viennese classics .

His church music was valued for its accessible and easy to perform. These works are examples of a genre that wanted to popularize post-classical church music. His pastoral mass opus 147 and the country mass opus 107 in particular are performed frequently again today. In contrast, Diabelli had less success with his music and dramatic works.

His two- and four-hand piano works have undoubtedly proven to be of particularly stable value. They offer attractive, pedagogically valuable study material, especially for teaching. The progressively increasing technical and musical level of difficulty runs from the melodic exercise pieces with a range of five notes to the joys of youth and sonatinas to the delightful sonatas. The four-hand melodic exercise pieces in particular are very popular in early piano lessons. Although the primo part only has five notes, Diabelli created a melodically appealing, harmoniously rich and formally diverse piano cycle that has resonated to the present day.

However, Diabelli is also important as a composer for the guitar. A guitar school and other didactic work date from the time of his guitarist teaching activity . For guitar solo and guitar duo he wrote mainly sonatas, sonatinas, variations, serenades and arrangements of popular opera melodies: chamber music in connection with piano, string and wind instruments and a large number of songs with guitar accompaniment.

Diabelli has received several awards for his life's work: the Gesellschaft der Musikfreunde Wien and the Dommusikverein Salzburg made him an honorary member, the Kaiser awarded him the title of “ k. k. Court music dealer ”.

An international composers competition founded in 2014 was named after Diabelli, which takes up the idea of ​​specifying a topic in order to achieve a relatively easy-to-understand comparability of the competition entries.

Music for and with guitar