At the age of 13, Kriehuber was accepted into the drawing class of the Imperial Academy in Vienna. In 1818 he accompanied Prince Sanguszko to Poland as a drawing teacher . In 1821 he returned to Vienna. In order to raise money for studying at the academy and for a living, he became one of the hardest working lithographic employees of the Trentsensky publishing house. In 1826 his first portraits appeared using the new printing technique of lithography . Over the next few decades, Kriehuber became the most sought-after and best-paid portraitist in Vienna during the Biedermeier period . His success is probably due to the fact that he knew how to make men more important and women more beautiful than they really were.

With the advent of photography , Kriehuber's star sank. In 1860 he was the first artist in Austria to receive the Franz Joseph Order . The last years of his life were overshadowed by the lack of orders and poverty. He died on May 30, 1876 in his hometown. He found his final resting place, today an honorary grave , in the Vienna Central Cemetery (11-2-49).

Significant collections of his works can be found in the Albertina Collection of Graphics and the portrait collection of the Austrian National Library in Vienna. The Kriehubergasse in Vienna- Margareten has been named after him since 1889 .

His son was the draftsman and lithographer Fritz Kriehuber . 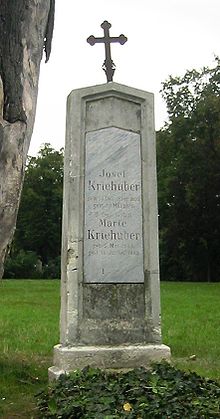 His work, a reflection of the Viennese society of this era, comprises around 3,000 portrait lithographs, as well as several hundred watercolors. You can hardly find a significant personality of this time who was not portrayed by Kriehuber. To name are u. a .: