Archduke Karl Ludwig Joseph Maria of Austria (born July 30, 1833 in Schönbrunn , then near Vienna ; † May 19, 1896 in Vienna) was the second younger brother of Emperor Franz Joseph I of Austria . 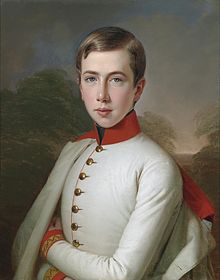 Karl Ludwig was the third son of Archduke Franz Karl after the later Emperor Franz Joseph I and the later Emperor Maximilian of Mexico . After the death of Emperor Maximilian of Mexico in 1867 he was the oldest living brother of Emperor Franz Joseph I and therefore - from the death of Crown Prince Rudolf in 1889 until his own death - heir to the throne. He was the father of Franz Ferdinand (heir to the throne 1896–1914) and Archduke Otto Franz Joseph , father of the last Emperor of Austria, Karl I.

Karl Ludwig's highest political function was that of the Imperial and Royal Governor in Tyrol . He was appointed by Franz Joseph I in 1855. In 1861 he gave up the office when the emperor with the February patent enacted an imperial constitution that subordinated the governor to the minister of the interior; He considered this inappropriate for a member of the ruling family.

His interest was more in art than politics and the military . He was the protector of several artists' associations and liked to give balls and charity events.

After the death of Crown Prince Rudolf in 1889, he was automatically heir to the throne of the Austro-Hungarian monarchy . Karl Ludwig died of an illness that he contracted on a trip to Egypt and Palestine when he drank (contaminated) Jordan water for religious reasons . There he visited his son Franz Ferdinand, who was curing his tuberculosis in Cairo .