Elisabeth Auguste Sofie of the Palatinate 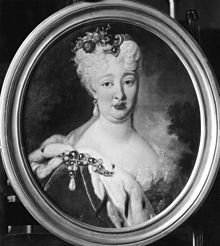 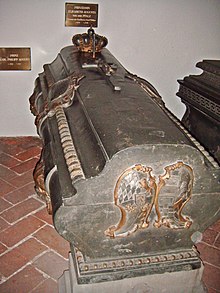 Sarcophagus in the St. Michaelskirche Munich.

Elisabeth Auguste was the elector's only legitimate child to reach adulthood. For dynastic reasons, she was married to Joseph Karl von Pfalz-Sulzbach by her father in 1717 , the designated successor to Karl Philip. Thus the two Wittelsbach lines Pfalz-Neuburg and Pfalz-Sulzbach were merged.

The eldest son from this connection would have become Elector Palatinate, but all of the couple's sons died in childhood. Elisabeth died in another stillbirth in 1728. Nevertheless, her line lived on through her two daughters Elisabeth Auguste and Maria Franziska Dorothea . Elisabeth Auguste was married to Karl Theodor and Maria Franziska became the founder of the Bavarian royal line up to 1918 and their descendants up to the present at the side of her husband Friedrich Michael von Pfalz-Birkenfeld .

Princess Elisabeth Auguste was buried in the Carmelite Church in Heidelberg , after the abolition of the monastery, her coffin was transferred to St. Michael's Church in Munich in 1805 .

Note: Her two great-grandfathers Januz Radziwill are two different people with the same name but who were related to each other.